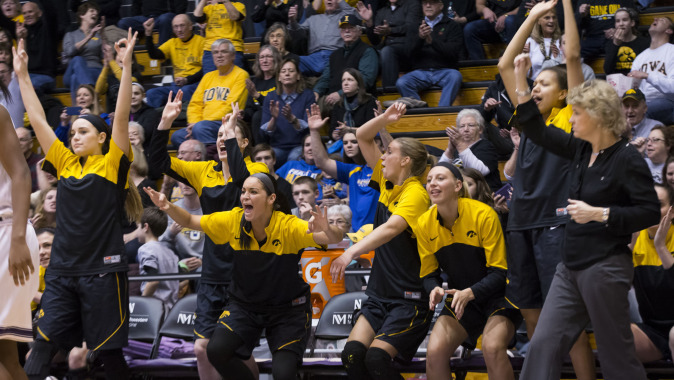 WATCH LIVE ON ESPN2:
Sunday’s contest can be seen live on ESPN2. Tiffany Greene and LaChina Robinson will call the action.

SCOUTING MARYLAND:
? Maryland, in its first season in the Big Ten, is 18-2 overall and 9-0 in conference action.
? The Terrapins have won 12-straight games. Their losses this season have come to Notre Dame and Washington State.
? Maryland is 10-0 at home this season.
? Four Terrapins are averaging double figures: Shatori Walker-Kimbrough (14.3), Laurin Mincy (14.1), Lexie Brown (12.4) and Brionna Jones (12.4).
? Maryland is coached by Brenda Frese, a native of Cedar Rapids, Iowa. She is in her 13th year at Maryland. Frese led the Terrapinds to the 2006 NCAA Championship and an NCAA Final Four appearance last season.

SERIES HISTORY:
Iowa has won the only meeting in the series, winning at Maryland during the 1992-93 season, 53-50.

MOVING UP CAREER CHARTS:
? Samantha Logic (768 career assists) surpassed Cara Consuegra (1997-2001; 576) as Iowa’s all-time assists leader during Iowa’s win at Illinois on March 2, 2014, during the 2013-14 regular season finale. She ranks sixth in Big Ten history. Jess Strom of Penn State (776) is fifth, while Helen Darling of Penn State is fourth (791).
? Melissa Dixon is Iowa’s career record holder for 3-pointers (289). She ranks fifth in Big Ten history. Amber Moore of Illinois is fourth (293), and Lindsay Bowen of Michigan State is third (294). Kelly Mazzante of Penn State is second (357), while Maggie Lucas of Penn State is the Big Ten record holder (365).
? Bethany Doolittle is third all-time in program history with 232 career blocks. Tangela Smith is second with 235. Morgan Johnson is first with 293.