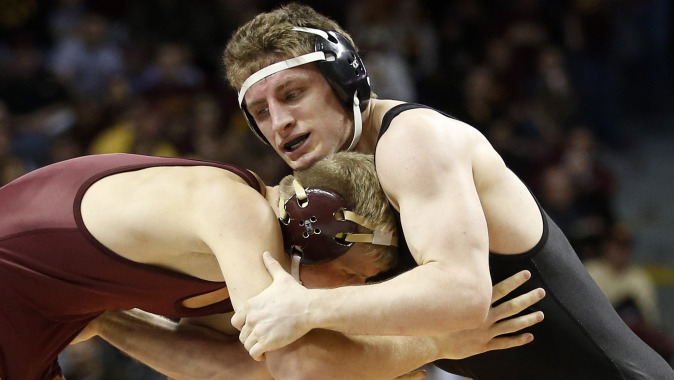 ON THE MAT
The top-ranked University of Iowa wrestling team hosts No. 16 Michigan on Friday at 7 p.m. (CT) on Mediacom Mat at Carver-Hawkeye Arena. A win against the Wolverines would give Iowa the outright Big Ten regular season dual championship. The Hawkeyes clinched a share of the title with an 18-12 win against Penn State on Feb. 8. The Hawkeyes host No. 13 Virginia on Sunday at 1 p.m. in the opening round of the EAS/NWCA National Duals. The winner advances to the championship rounds, hosted by the University of Iowa at Carver-Hawkeye Arena on Feb. 21-22.

TICKET INFORMATION
Tickets to the Michigan dual are $12 for adults and $8 for youth 18 and younger. Adult tickets are $15 for the Virginia dual. UI students and kids five-years old and younger are admitted free. Tickets to the second round of the Cliff Keen National Duals (Feb. 21-22) — featuring eight teams and three rounds of competition — are $10 for Saturday’s quarterfinals and semifinals, and $20 for Sunday’s final round.

BIG TEN CHAMPIONS
Iowa won a share of the Big Ten regular season dual title with an 18-12 win at Penn State on Feb. 8. The Hawkeyes are 8-0 in the Big Ten, one dual ahead of Nebraska and Ohio State in the loss column. A win on Friday would guarantee Iowa the outright Big Ten regular season dual championship. The Hawkeyes have won or shared seven of the last eight Big Ten dual championships, and have won or shared the regular season title eight times since the conference started recognizing a dual meet champion in 1999. Iowa won the title outright in 2000, 2008, 2009, 2010, 2011, and 2013, and shared the title in 2003 and 2014.

WIRE TO WIRE
Iowa debuted at the top spot on Nov. 11 when the USA Today/NWCA preseason poll was released 14 weeks ago. The Hawkeyes have maintained the top spot all season and enter the weekend as the unanimous No. 1, claiming all 12 first-place votes.

THE SERIES — MICHIGAN
Iowa has won seven straight against Michigan and leads the all-time series 30-25-1. The Hawkeyes are 13-9-1 against the Wolverines in duals wrestled in Iowa City. Michigan’s last win at Carver-Hawkeye Arena was a 21-11 victory on Feb. 13, 2005. Iowa won the last meeting between the teams, 26-6, in Iowa City in 2014.

THE SERIES — VIRGINIA
Iowa won the only meeting between the schools, 26-12, on the campus of UT-Chattanooga. Fourth-ranked Mike Evans defeated eighth-ranked Nick Sulzer, 7-4, at 165 pounds, and sixth-ranked Bobby Telford won by forfeit against Patrick Gillen.

TOPS IN THE BIG TEN
Redshirt freshman Brandon Sorensen and sophomore Sammy Brooks are the highest ranked Big Ten wrestlers at their respective weights, according to the latest Intermat poll. Sorensen is 27-2 and ranked No. 2 at 149 pounds behind Edinboro senior David Habat. Habat defeated Sorensen, 3-2, in the semifinals of the Midlands Championships. Brooks is 21-2 and ranked No. 8 at 184 pounds. He is one of two Big Ten wrestlers ranked in the top 10 at 184. Ohio State’s Kenny Courts is ranked 10th. Brooks defeated Courts 3-2 in Columbus on Jan. 4.

SORENSEN IS 1 OF A KIND
Redshirt freshman Brandon Sorensen is the only Division I wrestler in the country with wins over two reigning NCAA finalists. Sorensen defeated NCAA 149-pound runner-up Josh Kindig, 6-1, on Jan. 11, and 12 days later he handed defending NCAA champion Jason Tsirtsis is first loss of the season, 3-2, in double overtime. His 27 wins lead the team, and his only losses have been to teammate Brody Grothus (3-2) at the Luther Open, and current No. 1 David Habat (3-2) at the Midlands Championships.

Evans is 20-1 with 12 wins by bonus points. Burak is 13-2 with two pins, one major decision, and one technical fall. He has claimed two tournament titles wrestling unattached at the Luther Open and Midlands Championships. He wrestled attached for the first time Jan. 4 at Ohio State and earned a 2-1 win over No. 7 Kyle Snyder.

CHASING MILESTONES
Seniors Mike Evans and Bobby Telford are within striking distance of career win No. 100. Evans leads all active Hawkeyes with 97 career wins, Telford has 96. Forty wrestlers in the program history have accumulated 100 career wins, including coaches Tom Brands (158), Terry Brands (137), and Ryan Morningstar (110). Tom Brands is one win shy of his 160th dual victory at Iowa, which would tie Dave McCuskey for No. 2 in program history.

B1G WEEKLY HONORS
University of Iowa senior Bobby Telford has been named Big Ten Wrestler of the Week for the second time this season, the conference office announced Tuesday. Telford, a native of Hockessin, Del., defeated two ranked opponents on his return to the east coast last weekend. He shutout 13th-ranked Spencer Myers, 4-0, at Maryland on Feb. 6, and blanked sixth-ranked Jimmy Lawson, 3-0, at Penn State on Feb. 8. The Hawkeyes have received four Big Ten weekly honors this season, more than any other conference school. Redshirt freshman Brandon Sorensen has earned the honor on two occasions, first on Jan. 13 and again on Jan. 27.

HAWKEYES IN THE RANKINGS
Iowa has nine wrestlers ranked in the top 10 of the latest Intermat rankings (Feb. 10), more than any other school. Four of Iowa’s wrestlers are ranked in the top five, including Thomas Gilman (5), Brandon Sorensen (2), Mike Evans (3), and Bobby Telford (2). Four more Hawkeyes are projected in the top eight, including Cory Clark (6), Josh Dziewa (6), Sammy Brooks (8), and Nathan Burak (6). Nick Moore is ranked No. 9 at 165, and Michael Kelly is ranked No. 14 at 157.

40 YEARS SINCE NO. 1
Iowa celebrated the 40th anniversary of its first national championship on Jan. 23. Gary Kurdelmeier led Iowa to its first NCAA Championship in 1975, and in the 40 years since, the Hawkeyes have accumulated 23 team titles, more than any other school — Oklahoma State (7), Penn State (4), Minnesota (3), Iowa State (2), and Arizona State (1).

NWCA NATIONAL DUALS
The Division I National Duals was founded as part of the Virginia Duals in Hampton, Va., in 1989 as the National Dual Meet Championships. In 1991, the event began to rotate around the country with the oversight of the National Duals handled by the National Wrestling Coaches Association. Since 1989, 10 different cities have hosted the championships entirely or served as a championship finals site. Cedar Falls, Iowa, had the longest consecutive run of hosting championships, with six straight years from 2006-2011. This year’s finals host, Iowa City, has hosted the event previously in 1998 and 1999. Over the past 26 years, the team championship trophy has only been hoisted by six programs – Oklahoma State (8 titles), Minnesota (8), Iowa (6), Penn State (2), Cornell (1) and Iowa State (1). Iowa, Minnesota and Cornell all look to win another dual team championship this season.

NWCA FORMAT
This year’s format melds a regional concept born a few seasons ago with a championship weekend site to fully expand the reach of the event. Eight regional sites will host play-in matches on Feb. 14-15, while the winners of those eight duals will go to Iowa City on Feb. 21-22 and then compete in the championship round. The eight teams advancing will be reseeded according to their ranking by the USA Today/NWCA Division I Wrestling Coaches Poll. No draws are pre-determined based on first-round matches. Quarterfinals and semifinals will take place in Carver-Hawkeye Arena in Iowa City, Iowa on February 21 with the finals and third-place dual on February 22. The semifinals and finals will be shown live on the Big Ten Network.

NWCA TEAM RANKINGS
Ten of the 16 teams in the 2015 Division I field are ranked in the Top 15 according to the USA Today/NWCA Division I Wrestling Coaches Poll including five of the top six. Iowa, Missouri, Ohio State, Minnesota and Cornell. Other ranked teams include Lehigh, Illinois, Virginia, Edinboro and North Dakota State. Chattanooga and Oklahoma have all spent time in the Top 25 this season.

NWCA OPENING ROUND
First Round Matches (rankings as of Feb. 10 Coaches Poll)
Rankings will likely change prior to Feb. 14-15 competition