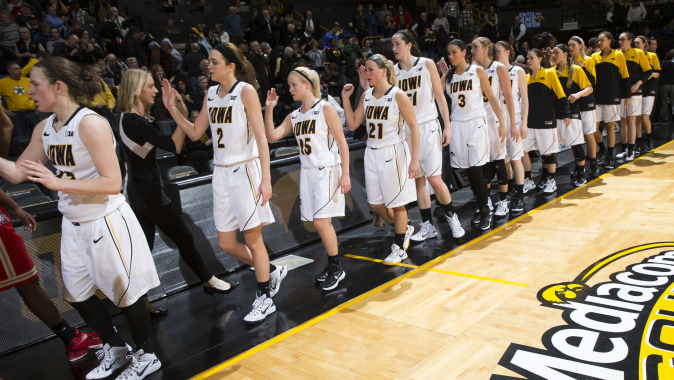 QUICK HITTERS:
? Iowa is ranked No. 14 in the Associated Press Top-25 poll and No. 13 in the USA Today Coaches poll.
? Iowa’s NCAA RPI (Feb. 13) is No. 7. Iowa is 11-3 against teams in the top 55 of the RPI.
? Iowa is in second place in the Big Ten at 11-2, two games ahead of Rutgers and Ohio State (9-4).
? The Hawkeyes have won 20-of-24 games played, the quickest 20-win season for Iowa since 1995-96.
? Head coach Lisa Bluder has 298 wins amidst her 15th season at the helm of the program. She has led the team to three consecutive 20-win seasons, and eight 20-win seasons overall.
? Iowa senior guard Samantha Logic, the NCAA’s active career assists leader (801), is fourth all-time in assists in Big Ten history. With 10 assists at Nebraska, Logic became the 28th player in NCAA history to record 800 assists or more in her career.
? Logic, a native of Racine, scored a career-high 30 points in her home state, leading Iowa to an 87-75 win at Wisconsin.
? Iowa’s Melissa Dixon is fifth nationally in 3-point percentage (47%). She is second the nation in 3-point field goals per game (3.74) and total (86).
? Iowa set the school record for scoring offense (78.2) last season, leading the league in scoring while notching the second-most points in a season in Big Ten history (2,814). The Hawkeyes rank 10th nationally this season (79.3).
? Ally Disterhoft has scored in double figures in 38 of her 41 career starts. Iowa is 33-8 when Disterhoft starts.
? Iowa is the only Big Ten team, and one of only 14 teams in the country, to appear in the last seven NCAA Tournaments. There are 349 Division I teams.
? Iowa is 46-13 overall and 18-0 in games aired on the Big Ten Network since the start of last season.

WATCH THE ACTION:
Sunday’s contest can be seen for a fee on BTN Plus.

PROMOTIONS
? Go Red for Women, but wear Black and Gold for the Hawkeyes.
? Free “I heart Iowa” tote bags for the first 1,000 fans.
? Borlaug & Wickham Elementary Night.
? Post-game autographs at north end of the concourse

SCOUTING INDIANA:
? Indiana is 14-10 overall and 4-9 in Big Ten Conference action. The Hoosiers are tied for ninth in conference standings with Wisconsin.
? The Hoosiers most recently defeated Illinois on Feb. 11, 85-58, in Bloomington, Indiana, ending a two-game losing streak.
? Three Hoosiers are averaging double figures: Tyra Buss (12), Larryn Brooks (12), Amanda Cahill (10.7).
? Indiana is coached by Teri Moren. She is in her first season.

HAWKEYES SECURE SWEEP OF NEBRASKA ON THE ROAD:
? No. 13 Iowa overcame a nine-point deficit to secure its first road win, 69-61, at No. 20 Nebraska since March 21, 2005 on Feb. 12.
? Thursday’s win for Iowa is only the third loss for Nebraska inside Pinnacle Bank Arena.
? The win gave Iowa its first ever season sweep of Nebraska, as the Hawkeyes defeated the Huskers in overtime, 78-72, inside Carver-Hawkeye Arena on Jan. 26. The victory ended an eight-game losing streak against the Huskers.
? The win earned the program it’s third consecutive 20-win season and the eighth of the Bluder era.
? Samantha Logic narrowly missed a double-double, dishing out 10 assists and scoring nine in the contest. She is fourth all-time in Big Ten Conference history with 801 career assists, and is the 28th player in NCAA history to record 800 or more assists in her career.
? Three scored in double figures for the Hawkeyes: Ally Disterhoft (14), Kali Peschel (13), Bethany Doolittle (12).
? Peschel scored all 13 points in the second half, reaching double digits for the first time since scoring 13 against Iowa State on Dec. 11, 2014.
? Disterhoft scored in double digits for the 16th consecutive game and the 22nd time this season.
? Doolittle reached double figures for the seventh game in a row and 18th time this year.

NAISMITH TROPHY LIST NARROWS, LOGIC MAKES THE CUT
? Samantha Logic remains in the running for the Naismith Trophy, appearing on the Midseason 30 list released by the Atlanta Tipoff Club on Feb. 11.
? Logic is one of three players from the Big Ten Conference to appear on list, joining sophomore Lexi Brown of Maryland and sophomore Tyler Scaife of Rutgers.
? The award is given to the women’s college player of the year in early April.

MOVING UP CAREER CHARTS:
? Samantha Logic (791 career assists) surpassed Cara Consuegra (1997-2001; 576) as Iowa’s all-time assists leader during Iowa’s win at Illinois on March 2, 2014, during the 2013-14 regular season finale. She is fourth in Big Ten history. Tina Nicholson of Penn State is third (826).
? Melissa Dixon is Iowa’s career record holder for 3-pointers (299). She is third in Big Ten history. Kelly Mazzante of Penn State is second (357), while Maggie Lucas of Penn State is the Big Ten record holder (365).
? Bethany Doolittle is second all-time in program history with 243 career blocks. Morgan Johnson is first with 293.

UP NEXT:
The Hawkeyes face Minnesota (19-6, 8-5) on Tuesday in Minneapolis, Minnesota. Tipoff is set for 8 p.m. (CT). The game will be aired on the Big Ten Network.