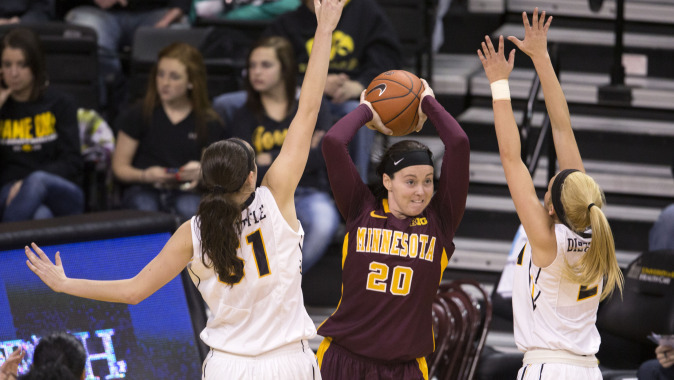 WATCH THE ACTION:
Tuesday’s contest will be broadcast live on BTN and BTN2Go. Lisa Byington and Shelley Till will call the action. Iowa is 18-0 when playing on BTN since the start of last season.

QUICK HITS:
? Head coach Lisa Bluder has 299 career wins at Iowa.
? Iowa is ranked No. 13 in the Associated Press Top-25 poll and No. 13 in the USA Today Coaches poll.
? Iowa’s NCAA RPI (Feb. 16) is No. 7. Iowa is 11-3 against teams in the top 55 of the RPI.
? The Hawkeyes have won four straight, and 10 of their last 11 games.
? Iowa is in second place in the Big Ten at 12-2, two games ahead of Rutgers (10-4).
? The Hawkeyes have won 21-of-25 games played, the quickest 20-win season for Iowa since 1995-96.
? Iowa is 5-2 on the road in conference play, with two league road games remaining (at Minnesota, at Ohio State).
? Iowa senior guard Samantha Logic, the NCAA’s active career assists leader (812), is fourth all-time in assists in Big Ten history. Penn State’s Tina Nicholson (826 assists) is third. With 10 assists at Nebraska, Logic became the 28th player in NCAA history to record 800 assists or more in her career.
? Iowa’s Melissa Dixon is fifth nationally in 3-point percentage (46.7%). She is second nationally in 3-point field goals per game (3.72) and total (93).
? Iowa set the school record for scoring offense (78.2) last season, leading the league in scoring while notching the second-most points in a season in Big Ten history (2,814). The Hawkeyes rank eighth nationally this season (79.3).
? Ally Disterhoft has scored in double figures in 39 of her 42 career starts. Iowa is 34-8 when Disterhoft starts.
? Iowa is the only Big Ten team, and one of only 14 teams in the country, to appear in the last seven NCAA Tournaments. There are 349 Division I teams.
? Iowa is 48-13 overall and 18-0 in games aired on BTN since the start of last season.

SCOUTING MINNESOTA:
? Minnesota is 20-6 overall and 9-5 in league play. The Gophers are tied for fourth in the Big Ten with Northwestern and Ohio State.
? Minnesota is 11-2 at home this season, with losses to Maryland and Purdue.
? Four Gophers are averaging double figures: Rachel Banham (18.6), Amanda Zahui (17.5), Shae Kelley (16.5), and Carlie Wagner (12.0). Banham is sidelined for the remainder of the season due to injury.
? Minnesota is coached by Marlene Stollings. She is in her first season.

#LOGICALCHOICE:
? Hawkeye guard Samantha Logic was named one of 10 finalists for the 2014-15 Senior CLASS Award on Feb. 12.
? Nationwide fan voting has begun to select the winner at seniorclassaward.com.
? Fans can vote for Logic — the #LogicalChoice — once per day on every device until March 23.
? The Racine, Wisconsin, native is the lone finalist from the Big Ten Conference.
? An acronym for Celebrating Loyalty and Achievement for Staying in School, the Senior CLASS Award focuses on the total student-athlete and encourages students to use their athletic platforms to make a positive impact as leaders in their communities.
? To be eligible for the award, student-athletes must be classified as NCAA Division I seniors and have notable achievements in four areas of excellence: community, classroom, character and competition.

NAISMITH TROPHY LIST NARROWS, LOGIC MAKES THE CUT:
? Samantha Logic remains in the running for the Naismith Trophy, appearing on the Midseason 30 list released by the Atlanta Tipoff Club on Feb. 11.
? Logic is one of three players from the Big Ten Conference to appear on list, joining sophomore Lexi Brown of Maryland and sophomore Tyler Scaife of Rutgers.
? The award is given to the women’s college player of the year in early April.

MOVING UP CAREER CHARTS:
? Samantha Logic (812 career assists) surpassed Cara Consuegra (1997-2001; 576) as Iowa’s all-time assists leader during Iowa’s win at Illinois on March 2, 2014, during the 2013-14 regular season finale. She is fourth in Big Ten history. Tina Nicholson of Penn State is third (826).
? Melissa Dixon is Iowa’s career record holder for 3-pointers (303). She is third in Big Ten history. Kelly Mazzante of Penn State is second (357), while Maggie Lucas of Penn State is the Big Ten record holder (365).
? Bethany Doolittle is second all-time in program history with 243 career blocks. Morgan Johnson is first with 293.

UP NEXT:
The Hawkeyes travel to Ohio State on Saturday. Tipoff is set for 6 p.m. (CT) on BTN.