Meyer Excels Even When No One is Watching 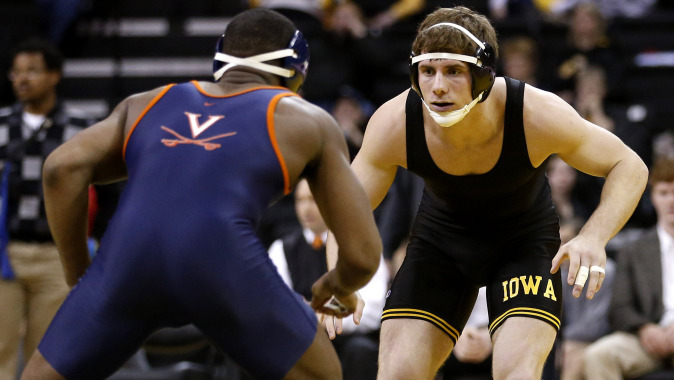 IOWA CITY, Iowa — If champions are made when no one is watching, then University of Iowa sophomore Alex Meyer has two bright years ahead.

Meyer, a 2012 state champion from Pleasant Hill, Iowa, has spent the last two seasons as an understudy to All-American Mike Evans at 174 pounds. But Meyer makes the most of his opportunities, going 36-8 overall and 5-0 in dual meets.

“It’s confirmed every day in the practice room with the ranked guys we have on our team that I wrestle with,” Meyer said. “I think I confirmed it for the fans that like to talk up in the stands and speculate about how good we’re going to be next year and the next year.”

“It was another ranked kid who is supposed to be pretty good,” Meyer said following top-ranked Iowa’s 30-6 victory over No. 13 Virginia in the first round of the EAS/NWCA National Duals in Carver-Hawkeye Arena.

This season Meyer is 16-2 with one loss to Evans at the season-opening Luther Open on Nov. 15. His other loss was 8-6 to Frank Cousins of Wisconsin in the third round of the 2014 Midlands Championships.

After the win against Virginia, UI head coach Tom Brands talked about training his team with an eye on the future. The near future includes the national duals, Big Ten Championships, and NCAA Championships. The not-so-distant future will undoubtedly include Meyer in a varsity singlet.

“Meyer is patient and he knows his role. There is no drama,” Brands said. “There isn’t a long face because he isn’t in the lineup, there is not anything where you’re getting static. He knows his time is coming and he is a heartbeat away.

“This isn’t the first time we have seen it and it’s not just this year that we have seen it. We saw his potential when we recruited him, we saw it his first year here, and we have seen it the last two years. Good for Meyer, good for us. We love Alex Meyer.”

The most recent performance was business-as-usual for Meyer, who makes weight and travels with the team to road competitions. And when he gets to center mat, he knows what to do.

The Hawkeyes (15-0 overall) return to action Saturday for a national duals quarterfinal against the University of Tennessee at Chattanooga (noon, CT); semifinals begin at 3 p.m., inside Carver-Hawkeye Arena. The final and consolation rounds will be Sunday at 11:30 a.m.