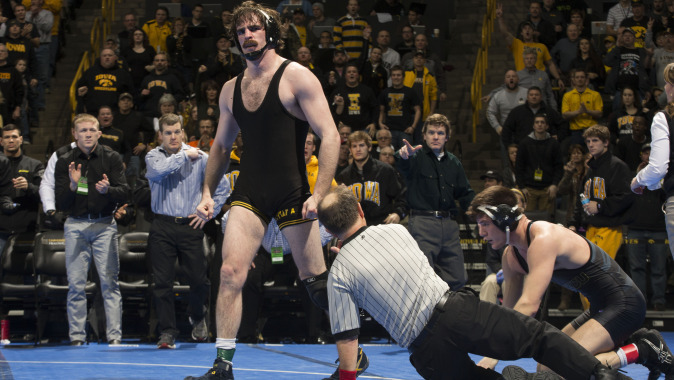 IOWA CITY, Iowa — University of Iowa senior Mike Evans was named Big Ten Wrestler of the Week by the conference office Tuesday. The weekly honor is the first of his career and the fifth for Iowa this season.

He pinned Chattanooga’s Sean Mappes in the quarterfinal round, blanked Cornell’s 18th-ranked Duke Pickett, 3-0, in the semifinals, and defeated Missouri’s fifth-ranked John Eblen, 4-1, in the finals.

Evans is 24-1 overall with nine pins this season. He is ranked No. 3 at 174 pounds and owns an 8-1 record against ranked opponents.

The Hawkeyes earned Big Ten Wrestler of the Week honors five times this season, more than any other school. Brandon Sorensen and Bobby Telford were each recognized two times.

Evans and the Hawkeyes (17-1, 9-0) return to action March 7-8 at the Big Ten Championships in Columbus, Ohio. The conference pre-seeds will be announced Monday, March 2.