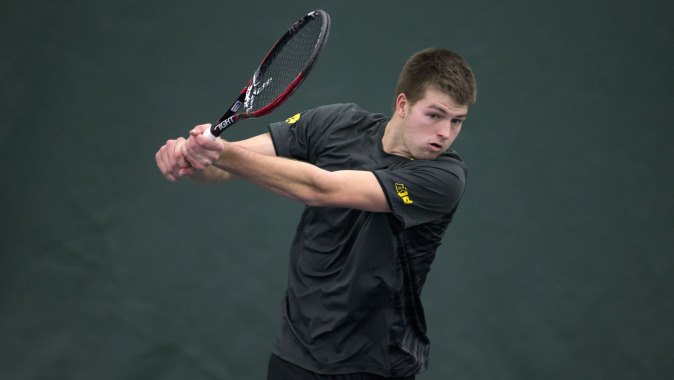 THIS WEEK:
The 57th-ranked University of Iowa men’s tennis team (7-1) hosts back-to-back matches this Friday and Saturday at the Hawkeye Tennis and Recreation Complex. Friday at 6 p.m. (CT) the Hawkeyes compete against 29th-ranked Drake University (10-3). The team then hosts 75th-ranked Louisiana-Lafayette (6-5) on Saturday at 2 p.m. (CT) start time. Admission is free.

HAWKEYES RANKED:
The recent team rankings released on Feb. 24 has seen Iowa jump from unranked to No. 57th nationally. The Hawkeyes were last ranked over a year ago on March 25, 2014. Iowa is (7-1) on the season and has defeated the likes of Wichita State, then No. 54 Utah, BYU and Yale. Sitting on a five-match winning streak, the team has an opportunity to ascend even higher up to rankings with this weekends’ matches. Matt Hagan continues to move up the ITA singles rankings. The preseason rankings on Jan. 6 had Hagan 116th. The recent rankings also released on Feb. 24 has seen Hagan climb 37 spots to 79th. With Iowa leading Wichita State 3-2, Hagan defeated No. 39 Tin Ostojic in a thrilling, three-set victory at the No. 1 position, 4-6, 6-3, 7-5. The win sealed a 4-2 win and the teams fifth-straight victory.

HAGAN CLAIMS BIG TEN PLAYER OF THE WEEK HONOR:
Senior Matt Hagan was named the Big Ten Player of the week by the conference office Tuesday. The weekly honor is the first of his career and the first by a Hawkeye since Marc Bruche in October of 2011. Hagan defeated No. 39 Tin Ostojic in singles. In doubles, he and freshman Lefteris Theodorou registered a victory over 20th-ranked duo Tomislav Gregurovic and Tin Ostojic, 7-5.

PATRICK REMAINS UNBEATEN IN SINGLES:
Dominic Patrick defeated BYU’s Shane Monroe in Provo, Utah, 2-6, 6-4, 6-4, extending his unbeaten record to 5-0 in spring play. He registered another road singles win against Utah’s Matt Cowley in Salt Lake City in straight sets 6-1, 6-1. The junior is now 6-0 heading into this weekends’ competition with No. 29 Drake and No. 75 Louisiana-Lafayette.

WILSON ON DRAKE AND LOUISIANA-LAFAYETTE:
“Drake will be a tough team. They are a great program that has made the NCAA tournament the last three years. We are going to have to be able to play our best tennis Friday night. Louisiana-Lafayette is another nationally ranked team, and they won their conference last year. They have a very good coach and a lot of good players. It’s going to be a tough turnaround to play two ranked teams on back-to-back days with not much time in between. That’s what our players come to Iowa for, to play the best competition. The guys are excited for the challenge and we’ve put ourselves in a good position for this weekends’ matches. “