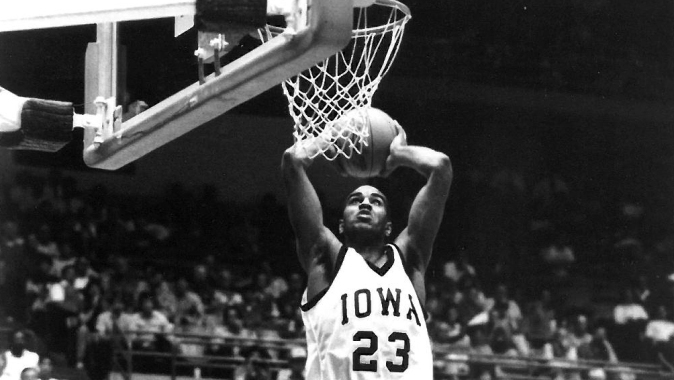 A Hawkeye letterman from 1986-89, Marble scored 2,116 points in 134 games to become the only Iowa player to score over 2,000 career points. He also recorded 668 career rebounds and 281 assists as the Hawkeyes posted an 89-37 record during his career. Iowa earned four straight NCAA Tournament appearances, including an Elite Eight appearance in 1987 and a trip to the Sweet 16 in 1988.

“Roy Marble enjoyed an outstanding playing career for the Iowa Hawkeyes and is more than deserving of this recognition,” said UI Director of Athletics Gary Barta. “While Roy’s number, or jersey, are not being retired today, we want to take this opportunity to express our appreciation for Roy’s contributions, and his dedication, to the Iowa basketball program.

“We have a number of former student-athletes, in both men’s and women’s sports, who are deserving of additional recognition,” said Barta. “Similar to our recently established Wall of Honor at Kinnick Stadium, our future plan is to establish a display area on the concourse of Carver-Hawkeye Arena that will recognize former student-athletes in a number of sports. Upon its completion, Roy’s name and number will be prominently displayed in his deserved spot in Hawkeye history.”