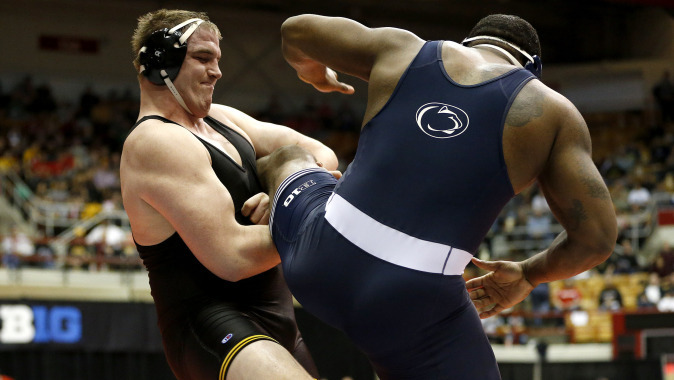 IOWA CITY, Iowa — The University of Iowa wrestling team will send its entire 10-man lineup to St. Louis next week for the 2015 NCAA Wrestling Championships. The event will be held March 19-21 at the Scottrade Center. The official tournament brackets were released Wednesday by the NCAA.

Eight of Iowa’s 10 qualifiers earned seeds for the national tournament, including five in the top five and eight in the top 10.

No Hawkeye earned a one or two seed, but three Hawkeyes were slotted at No. 3, including Clark, Evans, and Telford.

Sorensen is seeded fourth in his first NCAA Championships, and Dziewa is seeded fifth.

Gilman and Burak both earned No. 6 seeds, and Brooks will make his national tournament debut at the No. 9 seed.

Moore and Kelly were unseeded. Both were awarded at-large berths by the committee.

The NCAA also announced that the order of the championship round will be announced Saturday afternoon following the completion of Session V.

The NCAA Championships begin at 11 a.m. (CT) on March 19 at the Scottrade Center. Hawkeye fans can follow the action online at Hawkeye All-Access and ESPN3. The semifinals and finals will air live on ESPN. Every other session will be televised on ESPNU.