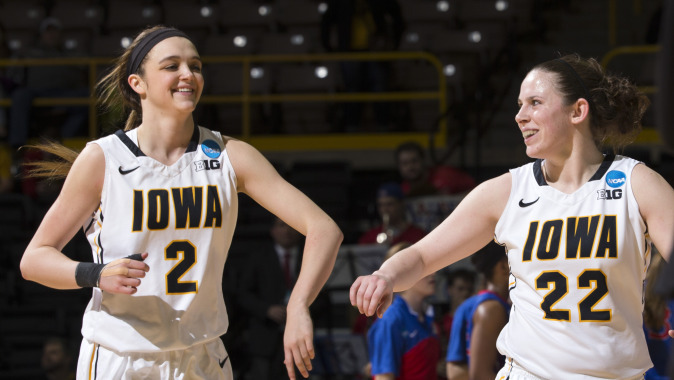 THE SETTING:
The 15th-ranked and third-seeded University of Iowa women’s basketball team (25-7) faces No. 11 seed Miami (20-12) on Sunday at 11 a.m. (CT) in the Second Round of the NCAA Tournament at Carver-Hawkeye Arena in Iowa City, Iowa.

WATCH THE ACTION:
The NCAA Tournament Second Round contest in Iowa City, Iowa, will be broadcast live on ESPN2. Clay Matvick and Katie Smith will call the action.

FOLLOW THE ACTION:
Hawkeye fans can also follow the game via live stats (Gametracker). The link can be accessed on the tournament central page at hawkeyesports.com. Follow @iowawbb on Twitter for live game updates.

QUICK HITS:
? Iowa defeated American in the First Round on Friday, 75-67, marking the third-straight year the Hawkeyes have advanced to the Second Round.
? With a win on Sunday, Iowa would advance to its sixth Sweet 16 in program history, and first since 1996.
? Iowa is 17-0 at home this season.
? The Hawkeyes defeated Miami in the First Round of the NCAA Tournament in 2013, 69-53, in the last meeting.
? Iowa is the only Big Ten team, and one of only 10 teams nationally, to appear in the last eight NCAA Tournaments. There are 349 Division I teams.
? The Hawkeyes own a 12-6 record this season against the 64-team NCAA Tournament field.
? Iowa is ranked No. 18 in the Associated Press Top-25 poll and No. 15 in the USA Today Coaches poll. Iowa has been ranked in all 19 weeks this season.
? Iowa’s NCAA RPI is No. 9. Iowa is 11-6 against teams in the top 50 of the RPI.
? Iowa’s Melissa Dixon leads the nation in 3-pointers per game (3.75).
? Iowa’s senior class — Melissa Dixon, Bethany Doolittle, Samantha Logic, and Kathryn Reynolds — is the program’s winningest graduating class in 21 years, in terms of total victories over four seasons (92 wins).
? Samantha Logic, the NCAA’s active career assists leader (877), is the first player in NCAA history to record at least 1,400 career points, 800 rebounds, 800 assists, and 200 steals. She was named a second team All-American by ESPN.
? Iowa is 52-16 overall since the start of last season.

4 HAWKEYES EARN ALL-BIG TEN HONORS:
? Samantha Logic, Melissa Dixon, Ally Disterhoft, and Bethany Doolittle earned All-Big Ten honors.
? For the second-straight year, Logic has been named a unanimous first team selection by the coaches, and a first team selection by the media.
? Logic becomes the first Hawkeye since Kachine Alexander (2010, 2011) to earn multiple first-team All-Big Ten honors, and the ninth in program history. The team co-captain has been honored by the Big Ten in all four years, earning third team honors as a sophomore, while being named to the All-Freshman Team in 2012.
? Dixon and Disterhoft earned second team honors from both the coaches and the media, while Doolittle earned second team honors from the coaches, and honorable mention honors from the media. Dixon also earned Iowa’s Sportsmanship Award nomination.
? Iowa equaled Maryland for the most all-league selections.
? Iowa’s four selections are the most since 2009. The Hawkeyes have had three All-Big Ten honorees in each of the previous five years.

#COREFOUR:
? The University of Iowa honored seniors Melissa Dixon, Bethany Doolittle, Samantha Logic, and Kathryn Reynolds following the conclusion of Iowa’s win over Minnesota on March 1.
? The group has led Iowa to 92 victories over the last four seasons, and the NCAA Tournament in each of the last four years.
? The #CoreFour is Iowa’s winningest (92 wins in four years) graduating class in 21 years, in terms of total victories. The 1994 class had 94 total wins. The 1990 class holds the record with 105 wins in four seasons.

MOVING UP CAREER CHARTS:
? Samantha Logic (877 career assists) surpassed Cara Consuegra (1997-2001; 576) as Iowa’s all-time assists leader during Iowa’s win at Illinois on March 2, 2014, during the 2013-14 regular season finale. She is third in assists in Big Ten history. Nancy Kennelly of Northwestern is second (892) and Ohio State’s Samantha Prahalis is first (901). She is tied for 14th in NCAA history in assists.
? Melissa Dixon is Iowa’s career record holder for 3-pointers (330). She is third in Big Ten history and 27th in NCAA history. Kelly Mazzante of Penn State is second (357), while Maggie Lucas of Penn State is the Big Ten record holder (365).
? Bethany Doolittle is second all-time in program history with 270 career blocks. Morgan Johnson is first with 293. Doolittle is ninth in Big Ten history.