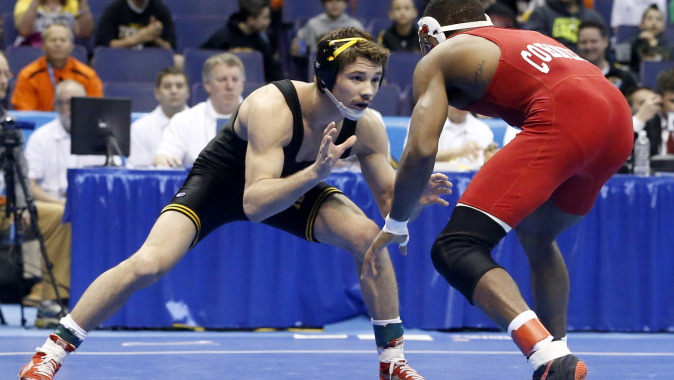 IOWA CITY, Iowa — The University of Iowa wrestling team may not have been dancing in confetti on the national stage in St. Louis, but they didn’t leave the Gateway to the West without reason to celebrate.

The Hawkeyes placed second at the 2015 NCAA Wrestling Championships and crowned six All-Americans, more than any other school.

They posed for a team photo with trophy in hand for the eighth straight season — the longest active streak in the country.

They head into the “offseason” with four returning All-Americans, as many as any other school, and they have a plan for next year. Starting now.

Gilman is one of Iowa’s two first-time All-Americans — the other is redshirt freshman Brandon Sorensen. Both placed fourth at their respective weight classes, Gilman at 125 and Sorensen at 149.

The pair combined for 30 of Iowa’s 84 team points. Only sophomore Cory Clark, the national runner-up at 133, scored more among Hawkeyes. Clark totaled 17 on his way to the national finals. Junior Nathan Burak, a two-time All-American at 197, scored 8.5 points. Throw in the three points Sammy Brooks earned at 184, and the Hawkeyes return 58.5 points from their five returning national qualifiers.

“Moving forward our team has probably the best depth of any other team,” said Sorensen. “We’ve got a lot of guys coming in and working throughout the summer. We just need to keep working hard and progressing.”

The key next season will be to turn that progress into results.

Those points will have to come from someone other than three-time All-Americans Mike Evans and Bobby Telford, two of Iowa’s five seniors at the national tournament.

Freshman Sam Stohl, a 2013 junior world medalist, is the heir apparent at heavyweight. Sophomore Alex Meyer, who defeated two top-six opponents this season, is the likely successor at 174. Junior Brody Grothus, an NCAA qualifier at 149 in 2014, could move up or down to 141 or 157, and freshman Burke Paddock is expected to slide in at 165.

The entire lineup will follow the lead of Clark, a two-time All-American who improved three spots on the medal stand from his freshman to sophomore seasons.

“Clark has done his best wrestling toward the end of the year and that’s what you want,” said Brands. “Let’s pick up where we left off and then build from there starting next year, and then we’ll be where we want to be. It’s not that easy, but we can continue a good thing. Let’s continue it.”