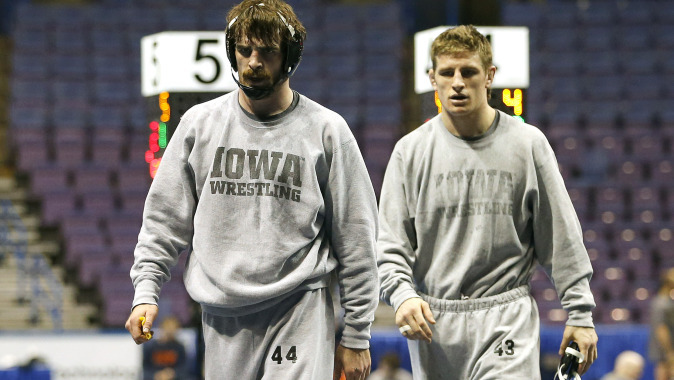 ON THE MAT
The Hawkeyes finished the 2014-15 season with a Big Ten regular season title, a Big Ten Tournament championship, six All-Americans, and nine academic All-Big Ten honors. The Hawkeyes owned an overall record of 17-1, won at least a share of the Big Ten regular season title for the seventh time in the last eight seasons, and took home an NCAA team trophy for the eighth straight season, the longest active streak in the country.

HAWKEYES MAKE IT 8 IN A ROW
Iowa placed second at the NCAA Championships to earn a national team trophy for the eighth consecutive season, the longest active streak in the country. The top four teams in the country earn a trophy at the NCAA Championships, and Iowa has placed no lower than fourth every year since 2008. The runner-up finish is a first for head coach Tom Brands. He led the Hawkeyes to three first place finished (2008-10), two third-place finishes (2011-12), and two four-place finishes (2013-14). The only year Iowa failed to win a team trophy was Brands’ first year in 2007 (8th place).

HAWKEYES WIN 35th B1G TEAM TITLE
Iowa scored 120 points at the Big Ten Championships to tie Ohio State for first place at the conference tournament. It marks the 35th team title in program history, and the first time Iowa has shared the trophy. Only six times in conference history have two teams share the tournament title, and 2015 was the first time it happened in 83 years. Iowa had seven wrestlers place in the top three, more than any other school, and four Hawkeyes placed second. Eight Hawkeyes wrestled their way to an automatic berth at the NCAA Championships.

CLARK EXTENDS RUN TO 26
Sophomore Cory Clark advanced to the finals at 133 pound to extend Iowa’s streak of NCAA finalists to 26 consecutive years. Iowa has at least one wrestler in the national finals every year since 1990, and in 40 of the last 41 seasons dating back to 1975.

B1G WEEKLY HONORS
The Hawkeyes received five Big Ten weekly honors this season, more than any other conference school. Redshirt freshman Brandon Sorensen earned the honor on two occasions, first on Jan. 13 and again on Jan. 27. Senior Bobby Telford was been named Big Ten Wrestler of the Week on Dec. 31 and Feb. 10, and senior Mike Evans won the final award of the season on Feb. 24.

MIDLANDS
Iowa crowned four champions and set a tournament record with 189.0 points at the 52nd annual Midlands Championships The Hawkeyes’ 189 team points broke their previous record of 187.5, set in 2013. Illinois was a distant second with 130.5, followed by Northwestern (106), Edinboro (101) and Virginia Tech (99.5). Iowa has won a record 24 Midlands team titles.

Seniors Mike Evans and Bobby Telford earned All-America honors for the third time in their careers. Evans placed sixth at 174 and Telford placed fifth at 285. Telford and Evans are two of the 34 wrestlers in program history to complete their career as three-time All-Americans.

ALL-AMERICAN SORENSEN HITS 40
Redshirt freshman Brandon Sorensen led the Hawkeyes with 40 wins, one shy of tying Ed Banach’s single-season freshman record (41). Sorensen finished the season 40-6 overall. He was the Big Ten runner-up at 149 pounds and earned All-America honors. He is the fifth freshman to earn All-America honors under head coach Tom Brands. The list includes Matt McDonough, Derek St. John, Bobby Telford, Cory Clark, and Sorensen. He is also the first Hawkeye to win 40 matches in a single season since Jody Strittmatter (43) and T.J. Williams (40) did so in 1999.

40 YEARS SINCE NO. 1
Iowa celebrated the 40th anniversary of its first national championship on Jan. 23. Gary Kurdelmeier led Iowa to its first NCAA Championship in 1975, and in the 40 years since, the Hawkeyes have accumulated 23 team titles, more than any other school — Oklahoma State (7), Penn State (4), Minnesota (3), Iowa State (2), Ohio State (1), and Arizona State (1).

100-WIN CLUB
Senior Bobby Telford pinned Indiana’s Garrett Goldman in the opening round of the 2015 Big Ten tournament to record his 100th career win. He finished his career with a record of 108-27. His 108 wins ties Mike Mena, Brent Metcalf, and Scott Trizzino for 31st all-time. Senior Mike Evans also collected win No. 100 this season. Evans finished his All-America career with a record of 107-27. His 107 wins tie Lee Fulhart and Brad Smith for 35th in school history. Telford and Evans are among 42 Hawkeyes in program history to amass 100 or more career wins.

THE ATTENDANCE GAME
The University of Iowa wrestling program led the nation in attendance for the ninth consecutive season. Iowa averaged 8,358 fans in six duals and led the country in total attendance with 55,390 fans attending seven home dates (including Iowa CIty Duals). The Hawkeyes averaged at least 8,000 fans for the seventh consecutive season. Iowa was involved in the three highest attended duals this year, including at Penn State (15,967), at Minnesota (13,620) and at home against Iowa State (11,882).