Hawkeyes to Compete at Thunderbird Invitational 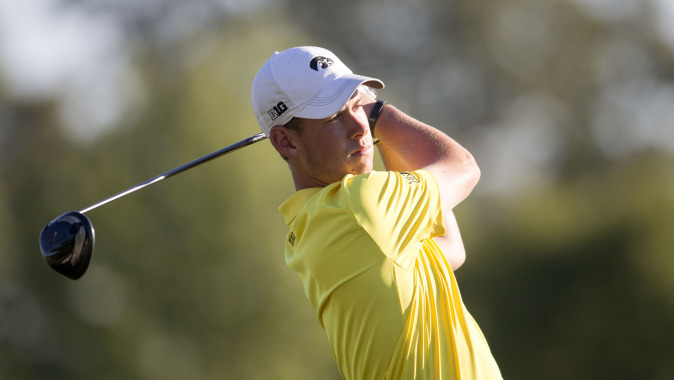 THIS WEEK
After a week off from competition, the University of Iowa men’s golf team travels to Tempe, Arizona this weekend to compete in the 43rd annual ASU Thunderbird Invitational held at ASU’s Karsten Golf Course. The two-day tournament, hosted by Arizona State University, begins with 36 holes on Friday, April 3, and concludes with a final round of 18 holes Saturday. Live scoring can be found here: http://bit.ly/1EDUR7c.

THE COURSE
Playing as a par-70, 6,971 yard course, Arizona State’s Karsten Golf Course is a classic Pete Dye, links-style course and was awarded 4 1/2 stars by the prestigious Golf Digest Rating Panel. Karsten Golf Course has been host to prestigious events, such as both the men’s and women’s Pac-12 and NCAA Championships, PING Invitational, and the U.S. Open Qualifying.

THE LINEUP
Sophomores Carson Schaake and Raymond Knoll, seniors Brian Bullington and Ian Vandersee, and junior Voramate Aussarassakorn are set to compete for the Hawkeyes at the ASU Thunderbird Invitational.

TOURNAMENT HISTORY
This weekend marks only the second time the Hawkeyes will have competed at the ASU Thunderbird Invitational since it began in 1973. Iowa finished as runner-up to tournament champion Arizona State in 2014, carding a team score of 837 (-15). Junior Brian Bullington and senior Steven Ihm were the top performers for Iowa, finishing in third and tying for fourth respectively.

LAST EVENT
The Hawkeyes competed at the 36th annual Schenkel Invitational on March 20-21, finishing in ninth place out of 15 teams. Iowa was led by junior Voramate Aussarassakorn and senior Ian Vandersee, finishing tied for 24th and tied for 33rd, respectively. Aussarassakorn carded a 69 (-3) in the first and second rounds, both season bests, before following up with a 74 (+2) in the final round of 18, finishing with a 54-hole total of 212 (-4). After firing a season best two under-par 70 in round one on Friday, Vandersee one-upped his performance in the second round shooting a 68 (-4); Iowa’s lowest round of 18 at the event. Vandersee carded a 76 (+2) in Saturday afternoon’s final round, finishing at 214 (-2).

HAWKEYES IN THE RANKINGS
The University of Iowa men’s golf team is ranked 42nd out of 262 teams in the most recent Golfstat Relative Rankings, and are the second-highest ranked Big Ten team.