Iowa Gains Experience in Session I 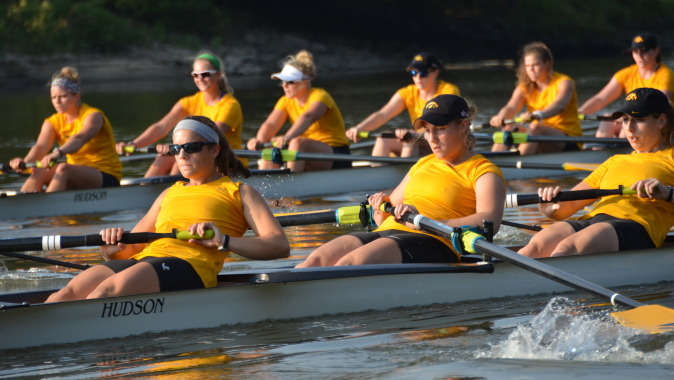 The Hawkeyes placed second in every event behind No. 6-ranked Yale, but ahead of a storied program in Cornell — an early sign of strength for Iowa rowing against strong Ivy League programs, who finished fourth and fifth, respectively, in their conference championship a season ago.

“I think our racing on Friday entire reasonably well,” head coach Andrew Carter said. “The weather wasn’t a factor on Friday, with fair conditions on the course and reasonable markings for the coxswains to follow.”

Session I began with the 3V8+ event, where the 1N8+ Iowa crew competed. In its first 2000-meter race against varsity competition, the novice crew earned a runner-up result behind Yale and ahead of Cornell. Iowa’s 2V4+ also had a strong outing, placing second with a faster time than the team’s 1V4+ posted in its runner-up finish.

The 2V8+ boat was the highlight of first session action for the Hawkeyes, as it finished just 2.5 inches shy of a first place result and the upset of No. 6 Yale.

“The 2V8+ had our most stand-out performance of the day, being only 2.5 inches off Yale, who are currently ranked No. 6 in the country,” head coach Andrew Carter said.

Session I ended one event early, as darkness and debris pushed the final 1V8+ race to Saturday morning at 7:30 a.m. with Session II to follow.

“It was a shame that the 1V8+ wasn’t able to get onto the course tonight,” Carter said. “I think they were really ready to go.”