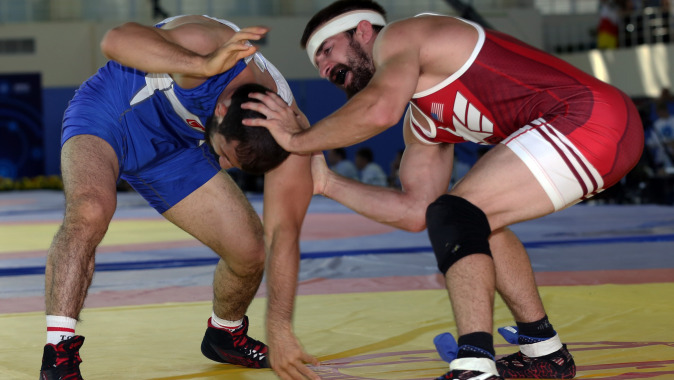 IOWA CITY, Iowa — When the 2015 Freestyle World Cup begins Saturday in Los Angeles, Brent Metcalf will do what he has done many times before… set his sights on a gold medal.

Metcalf is competing at the Freestyle World Cup as a member of Team USA for the third consecutive year. He’s joined by eight of the United States’ top-ranked wrestlers, including former University of Iowa teammate Tony Ramos, and he’s poised to lead Team USA to its first World Cup team title in 12 years.

“This is a big deal and it’s going to be big for us to go make a statement about what we’re about this year, especially when we have the World Championships on our home turf,” Metcalf said.

With the Rio Olympics on the horizon in 2016, Metcalf won’t have to leave stateside this year to scratch items from his career to-do list. The World Cup is in Los Angeles for the second straight year, and the 2015 World Championships are hosted in Las Vegas beginning Sept. 7.

Metcalf has competed at the World Championships three times, but is yet to medal.

The same can’t be said about the World Cup. He earned silver in Tehran, Iran, in 2013, and was the 2014 World Cup gold medalist in Los Angeles.

He said the difference between his first World Cup and his third are circumstantial, but the similarities are firm. This event is a big deal with global implications.

“You talk about the first World Cup in Iran, that was a pretty big deal (for me) just because of the location,” Metcalf said. “But this is a big deal too, according to UWW, our federation, it’s probably the third or fourth biggest event, starting at the Olympic Games, World Championships and then probably this.”

The World Cup is a dual tournament featuring teams from Azerbaijan, Belarus, Cuba, Iran, Mongolia, Russia, Turkey, and the United States. The U.S. has placed third three years in a row and, with four wrestlers ranked in the international top 10, should be considered one of the favorites again this year.

“The team wants to make a statement,” Metcalf said, “but like we say all the time here in the Iowa program, it’s about the individuals. I do my job and that takes care of the team.”

Metcalf is ranked No. 1 in the United States and No. 8 in the world at 65 kg. To repeat as World Cup champion he will need to navigate a weight class that features 2014 World champion Haji Aliev (Azerbaijan), and former World bronze medalists Gazorig Mandakhnaran (Mongolia) and Sayed Ahmad Mohammadi (Iran).

“What’s at stake is another World Cup gold medal,” Metcalf said. “I won silver in Iran, I lost to the Iranian. Then I was gold last year, but I didn’t get to wrestle the Russian and I’d like to do that again.”

The United States opens competition Saturday against Cuba and Russia, and closes pool play Sunday morning against Mongolia. The United States will face its equal from Pool B on Sunday afternoon. Visit themat.com for more information.