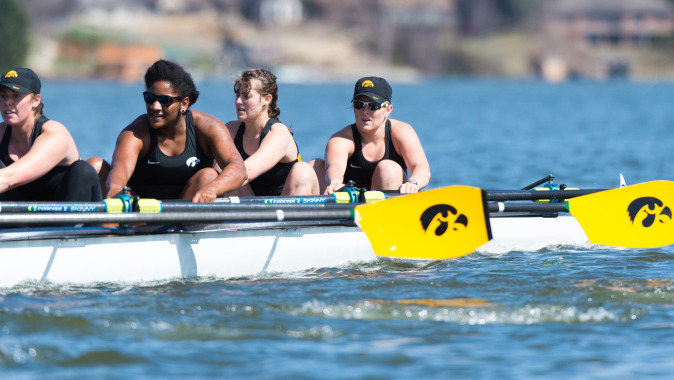 THIS WEEK:
The University of Iowa women’s rowing team travels to Kansas City, Kansas, for the B1G/Big12 Challenge this Saturday and Sunday. The Hawkeyes will take on Kansas and Oklahoma in a full weekend of racing on Wyandotte County Lake.

RACE STRUCTURE:
For the Big Ten/Big 12 Challenge, a point system is used to determine a dual-meet winner. Points are awarded in each boat class (both varsity eights, varsity fours, and novice eights) to determine a winner. The full day of racing will take place on Wyandotte Lake and will begin at 9:36 a.m. (CT) on Saturday morning with the 2N8+ from Oklahoma and Iowa.

Racing will be held in 12-minitue intervals, alternating between Iowa vs. Kansas and Oklahoma vs. Wisconsin in the morning session, through 1V8+ racing at 11:48 and 12 p.m. In the afternoon session, Iowa and Oklahoma will flight boats in the 2N8+ starting at 1:36 p.m., with an identical alternating format through the 1V8+ races at 3:48 and 4 p.m.

SCOUTING THE COMPETITION:
Oklahoma is fresh off a weekend of rowing at the Clemson Invite. The Sooners were lead by their 2V4+ crew, who collected a third place finish in its heat. The boat turned in a time of 7:36.8, besting boats from Penn, Indiana, Dartmouth and Duke. In the first session, Oklahoma recorded a third place finish and three fourth place finishes in its heats. The Sooners third varsity eight boat claimed third (7:18.5) to defeat Clemson and Duke.

Kansas had a strong showing in the Knect Cup on the weekend of April 11. The Jayhawks’ V8+ boat crossed with a time of 6:51.20, claiming a first-place finish in the Petite Final. Kansas’ V4+ boat had a strong showing, finishing third in the semifinal race with a time of 7:45.07. In the Petite Final, Kansas finished just behind Bucknell to place second in the event with a time of 7:47.83. Kansas’ 1V8+ boat was selected as the Big 12 Boat of the Week on April 15. The award-winning boat began the Knecht Cup with an impressive outing in their first heat, finishing in first place out of five schools with a time of 6:45.64.

LAST TIME OUT:
Iowa put on an outstanding performance at the Big Ten Double Dual in Ann Arbor, Michigan, on April 11. The Hawkeyes earned four victories against Michigan State, one win over No. 15 Indiana, and two over No. 7 Michigan. The Hawkeyes raced with fair conditions on Belleville Lake throughout the day, with sunshine and 10-12 mile per hour winds on the course. In the 1V4+ race, the Hawkeyes sent both the 1V and 2V crews to the line against Michigan State. The 1V4+ was the Spartan’s top-performing crews at the 2014 Big Ten Championships, which set the stage for challenging racing. Iowa hit its stride in the event with the Hawkeye crews finishing 15 seconds and 11.5 seconds ahead of Michigan State’s crew, respectively.

Iowa finished up the morning session with the 1V8+ race against Michigan State. Nina Hendriks, Zoe Ribar, Morgan Grastorf, Lauren Subler, Jessica Streur, Cristy Hartman, Hannah Hawks, Beth Baustian, and coxswain Katie Brown ended on a high note, topping their Big Ten foe once more with a 4.4 second margin to bring the Iowa’s morning session record to 4-3 and 4-2 against Michigan State. The 2V4+ kept things rolling with a come-from-behind win of three seconds over home-favorite, Michigan, and Indiana. The 2V4+ showed incredible grit and determination as they tracked down and passed a quality Michigan crew on their home course. The Hawkeyes finished a full 50 seconds ahead of the Hoosiers and posted the fastest time of any 4+ crew on the day.

BIG TEN ROWING CHAMPIONSHIPS:
This year, BTN will televise the Big Ten Rowing Championships from Eagle Creek Park in Indianapolis on Sunday, May 24 at 5 p.m. (CT). No. 1 Ohio State, the two-time defending national champion, will fight for its third-consecutive Big Ten title.

IN THE RANKINGS:
Iowa continues to receive votes in the CRCA/US Rowing Coaches Poll. The Hawkeyes gained six new votes after their performance against Michigan, Michigan State, and Indiana, bringing the total to seven.

UP NEXT:
The Hawkeyes will travel to Oak Ridge, Tennessee, to face off against Tennessee on May 2. The full day of racing will begin at 8 a.m. (CT).