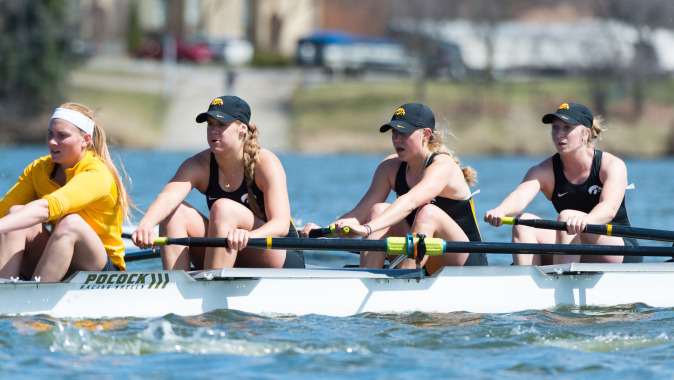 THIS WEEK:
The University of Iowa women’s rowing team travels to Oak Ridge, Tennessee, on Saturday to take on Tennessee and Central Florida. Racing is set to begin at 8 a.m. (CT).

RACE STRUCTURE:
The full day of racing will take place on Melton Hill Lake in Oak Ridge, Tennessee, and will begin at 8:30 a.m. (CT) on Saturday morning with the 1V8+ from Oklahoma, UCF, and Iowa. Racing will be held in 20-minitue intervals, with all three teams racing together.

SCOUTING THE COMPETITION:
Tennessee competed in two days of racing at the Clemson Invite on April 18-19. The Lady Volunteers’ N8+, V8+, and V4+ crews finished fifth, sixth, and seventh, respectively. Tennessee’s fastest crew was its 1V8+ that finished with a time of 6:52.3.

Central Florida hosted Old Dominion, Nova Southeastern and Miami in a home regatta on April 25. The team collected first place finishes in the 2V4+, 1V4+, 2V8+, and 1V8+ events on their home course. After closing out Saturday’s home regatta with a first-place finish, UCF’s 1V8+ was named the American Athletic Conference Boat of the Week for the second time this season (last on March 24).

LAST TIME OUT:
Iowa put together a solid day of racing against host Kansas, defending Big 12 Champion Oklahoma, and No. 8-ranked Wisconsin at the Big Ten/Big 12 Challenge in Kansas City, Kansas, on April 24. The Hawkeyes earned 10 victories against Kansas and six wins over Oklahoma. Iowa competed in 12 races over two sessions, finishing first in five contests and runner-up in six additional sprints. The Hawkeyes raced with excellent conditions on Wyandotte County Lake throughout the day, with light drizzle and calm water in the morning and a light tailwind in the afternoon. Predictions warned of severe weather for the afternoon duals so a compressed, modified program was used that had all four teams contesting each boat class together.

Nina Hendriks, Zoe Ribar, Morgan Grastorf, Lauren Subler, Jessica Streur, Cristy Hartman, Hannah Hawks, and Beth Baustian kept focused on the calls from coxswain, Katie Brown, and countered each move the Kansas crew made. At the finish, 8.8 seconds separated the two crews with the Hawkeyes once again topping their Big 12 opponent to bring the Iowa’s morning session record to a perfect 5-0 against Kansas. Iowa ended the morning in second place with 44 points, just two points behind No. 8 Wisconsin, 21 points ahead of Oklahoma, and 22 points ahead of Kansas. The varsity eights closed the day in impressive fashion for the Hawkeyes, remaining undefeated against the Big 12. The 2V8+ finished just 11 seconds behind Big Ten foe Wisconsin. The 1V8+ got off the line with Wisconsin, but the Badgers began their push before the 500-meter mark. The Hawkeyes battled to close the gap against a powerful and well-prepared Wisconsin crew, but each move from the Badgers yielded slightly more of a lead. Iowa finished the day in second place with 112 points. Wisconsin took first with 142, Oklahoma collected a third place finish with 73 points, and host Kansas rounded out the competition with 44 points.

BIG TEN ROWING CHAMPIONSHIPS:
This year, BTN will televise the Big Ten Rowing Championships from Eagle Creek Park in Indianapolis on Sunday, May 24 at 5 p.m. (CT). No. 1 Ohio State, the two-time defending national champion, will fight for its third-consecutive Big Ten title.

IN THE RANKINGS:
Iowa continues to receive votes in the CRCA/US Rowing Coaches Poll. The Hawkeyes continue to gain new votes after their performance against Kansas and Oklahoma, bringing the total to nine. The Black and Gold are also ranked fifth in Region Four of the NCAA Regional Rankings.

AN ELITE INVITATION:
Sophomore Morgan Grastorf — a member of the 1V8+ crew — was invited to attend the 2014 USRowing Women’s Pre-Elite Camp in Princeton, New Jersey. The camp, which began on June 8 and continued through June 22, grooms up-and-coming rowers for the national teams and is a great honor in the rowing realm. Grastorf was one of eight freshmen and one of 16 student-athletes selected to attend the camp.