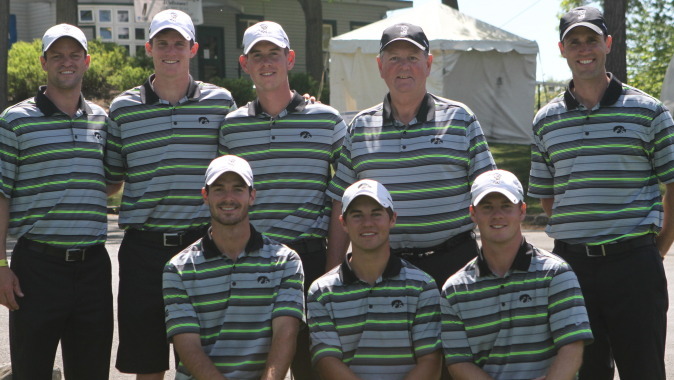 NEW HAVEN, Conn. — The University of Iowa men’s golf team shot an 11-over-par 291 in the first round of the NCAA Yale Regional on Thursday, earning a tie for eighth place after 18 holes of the 54-hole event.

Iowa was led in the opening round by senior Ian Vandersee, who carded a one-over-par 71 on The Course at Yale (par 70). Vandersee is tied for 12th place in the individual standings. Sophomore Carson Schaake recorded an opening-round 72 (+2) and is tied for 20th, while senior Brian Bullington shot a round of 73 (+3) and is tied for 30th.

“The scoring is what we expected, for the most part,” said head coach Tyler Stith. “We felt the team scoring would be bunched up (five teams within five strokes of the lead), with the layout and conditions of the course dictating that. The guys worked extremely hard; we had some guys who really grinded out some good rounds at the end of the day. We made quite a few pars today, and I think tomorrow we will make a few more putts and have a few more birdies.”

Vandersee shot even par over the first nine holes, recording birdies on holes two and eight. He suffered two bogeys on the back nine before his final birdie of the day on the par-four 17th hole. Vandersee missed the fairway off the tee on the two par five holes, but saved par on both 16 and 18 with key putts.

Schaake, who shared the Big Ten Conference medalist honors in his last outing, recorded 16 pars on the day to go with bogeys on holes eight and nine. The sophomore felt his trouble getting off the tee caused the lack of birdies.

“It was kind of a boring round with no birdies,” said Schaake. “I had a lot of long putts for birdie; I probably had four or five that could have gone in. I wasn’t hitting the driver very well and didn’t have many good looks to hit the ball close. The greens are really firm and pins were tough to get to from the rough. Hopefully tomorrow I can put it in the fairway a little more, hit it close and make some birdies.”

Bullington, one of two seniors in the Iowa line-up, began his day with five straight pars before shooting two-over on the front nine. His back nine included three bogeys, but he closed with a birdie on both of the par five’s to get back to one over par at the end of the day. “Ian, Brian and Carson played really solid rounds,” added Stith. “Anything even par, to a couple over par, was a good score today. I’m proud of the way they hung in there and finished strong. I am confident we are in a good spot for Friday; we are just a couple of shots from where we need to me. I expect us to come out tomorrow and play better.”

Sophomore Raymond Knoll and freshman Sam Meuret rounded out the Iowa line-up, with Knoll shooting 75 (+5) and Meuret recording a 77 (+7). Knoll made the turn at three over par before recording his two birdies on the back nine. Meuret struggled on the opening six holes, standing five-over-par with 12 holes to play. He added his only birdie on the seventh hole before playing the final 11 holes in two over par.

Second round play will be held Friday, with the third and final round slated for Saturday. Live scoring can be found at: http://golfstatresults.com/public/leaderboards/gsnav.cfm?pg=team&tid=7939