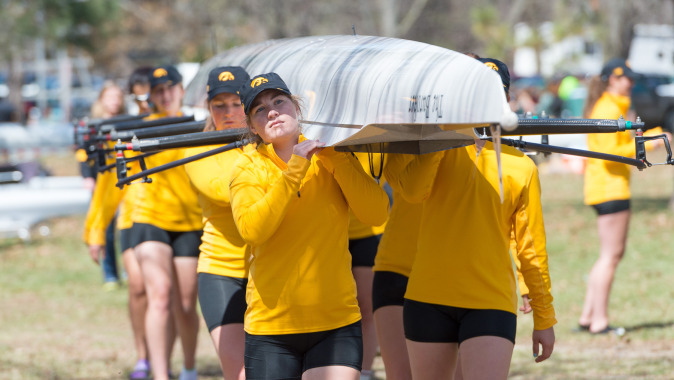 INDIANAPOLIS, Ind. — The University of Iowa women’s rowing team advanced six of seven boats to finals with its efforts on day one of the Big Ten Championship at Eagle Creek Park in Indianapolis, Indiana.

Iowa swept Minnesota and Rutgers in all four races on Lilly Lake Saturday night, added a pair of victories over Michigan State in the 1V8+ and 1V4+, and recorded one against Michigan in the 1V8+.

The Hawkeyes opened Big Ten Championship action in heat two of the 1V8+ competition. Against Indiana, Wisconsin, and Michigan State, Iowa worked to a third place result in the heat with a time of 6:54.239. The crew, comprised of Nina Hendriks, Zoe Ribar, Morgan Grastorf, Lauren Subler, Jessica Streur, Cristy Hartman, Hannah Hawks, Beth Baustian, and Katie Brown, was even with Michigan State through 500-meters, but fought back for a two-second lead at the 1000-meter point.

The Hawkeyes maintained the edge in the second 1000-meter segment to finish ahead of the historically strong Spartans (6:55.910) for third. Indiana placed first in the heat with a time of 6:41.334, followed by runner-up Wisconsin in 6:45.709.

In the second event on Saturday, Iowa’s 2V8+ fell behind early in heat two against Wisconsin, Indiana, and Michigan State crews and could not come back. The Hawkeye boat placed fourth in the heat, despite its strong effort in the second leg (7:03.487), less than two seconds shy of third place finisher Michigan State (7:01.520) and just over two seconds from runner-up Indiana (7:01.034). Wisconsin won the heat with a clip of 6:53.919.

Four Big Ten programs advanced all seven of their crews to finals action on Sunday, including Ohio State, Indiana, Wisconsin, Michigan, and Minnesota. Iowa and Minnesota each saw six boats qualify, while Michigan State had three make the cut. Conference newcomer Rutgers did not have any crews move on.