The More (Sports) the Merrier 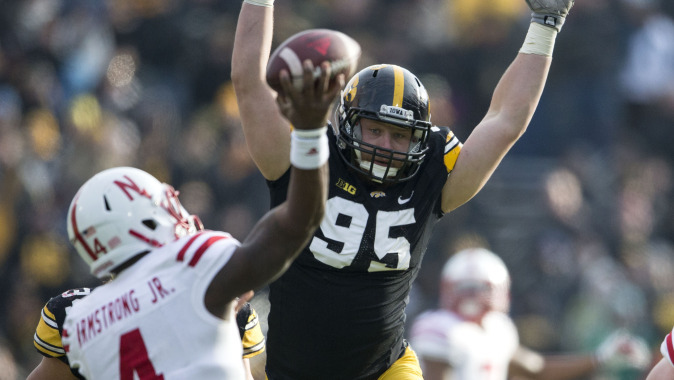 IOWA CITY, Iowa — According to recruiting sites, the University of Iowa football program is a popular final destination for several high school stars in the Class of 2016. But what can recruits do to catch the eyes of the Hawkeye coaching staff?

He wasn’t overlooked because he played 8-man football, rather than the traditional 11-man variety.

He wasn’t bypassed because he was from a small town with a high school graduating class of 11. The closest hamlet to Ott’s farm is Trumbull, Nebraska, with a population of 200.

What impressed UI assistant coach Reese Morgan wasn’t as much that Ott stood 6-foot, 4-inches and weighed 235 pounds (he now weighs 275). It was that during high school, Ott went from the sport of football, to basketball, to track. And he excelled at all.

“We identified Drew because of the things he did well in multiple sports,” Morgan said. “You look at his tape and you could see he was a good athlete. But can he play multiple sports? Drew was an all-state football player and his team played in the state playoffs all during his career. He was an excellent basketball player and his team won a state championship. He was an excellent track athlete. All those things — together with his character and work ethic — fit the criteria we were looking for.”

Not only did Ott play football in high school, he showed his versatility by playing several positions on the gridiron. He was named Nebraska Gatorade Player of the Year in 2012 after a senior season where he had 122 tackles, 52 pass receptions, two rushing touchdowns, and one passing touchdown.

In basketball, Ott led Giltner to the Class D2 state championship with a 52-41 double overtime win over Howells by scoring 21 points with 18 rebounds. In track & field, Ott helped the Hornets to third place at state in Class D with 43 ½ points. Ott ran the third leg on the sixth-place 4×100-meter relay and he was runner-up in the shot put, with a school-record toss of 56-4 ¼.

“It made me a more versatile athlete and it gave me a break from football, too,” Ott said. “It was nice to have a change and focus on a different season. Usually our coaches coached other sports, so they wanted you to participate in everything.”

His contributions haven’t decreased at the next level. In three seasons at defensive end for the Hawkeyes, Ott has compiled 110 tackles, 18 ½ tackles for loss, and 10 ½ sacks. He was named second team All-Big Ten Conference last season by league media after making 12 tackles for loss and eight sacks. Big Ten coaches named him honorable mention.

“Give credit to (strength and conditioning) coach (Chris) Doyle and the strength staff,” Ott said. “They make sure that day-in and day-out you’re building on your craft. There are no days off, so you either have to show up every day and become better, or you get buried. You have to show up and do it, otherwise people will not hear about you again.”

Ott is one of 88 Division I players nominated for the 2015 Bronko Nagurski Trophy Watch List which is presented annually to the national defensive player of the year. He is a preseason second team All-Big Ten selection by both Athlon Sports and Phil Steele.

Ott and the Hawkeyes open the 2015 season by hosting Illinois State on Sept. 5 inside Kinnick Stadium. Tickets are available for purchase by contacting the UI Athletic Ticket Office at (800) IA-HAWKS, or online at hawkeyesports.com.