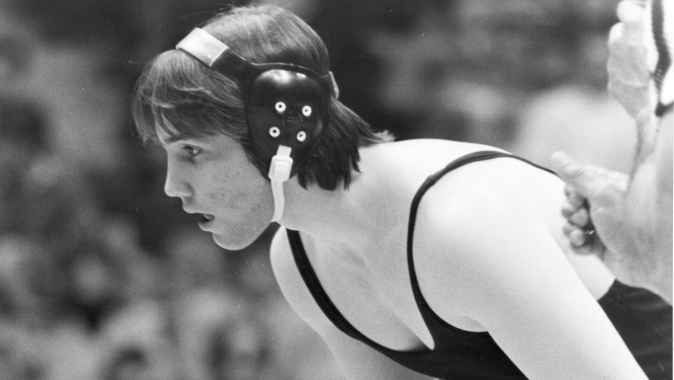 IOWA CITY, Iowa — In less than a week in 1982, the courtship between Jim Heffernan and the University of Iowa wrestling program made a 180 degree turn.

“We think you’re a really good wrestler,” Gable told Heffernan. “But we don’t think you’re going to be at a weight class we need. I think you should look at other schools.”

Heffernan hung up the phone and huddled with his father, Jim, and high school wrestling coach, Howard Ferguson. They created a new list of potential college destinations, but they didn’t have much time to brainstorm.

“Coach Gable called me from the Loyd Noble Center (in Norman, Oklahoma) and said `Do you think you can wrestle 150?'” Heffernan said. “I said yes. He said, `I changed my mind. We’re going to keep recruiting you.’

“In a matter of a couple days it changed the course of my wrestling career.”

His brother, John, was a Big Ten champion and two-time All-American for the Hawkeyes from 1984-89.

“There was a real pride in not only carrying on the tradition, but also the history of the guys who built it and turned it over to us,” Heffernan said. “It is not hard to wrestle with a group of guys like we had. Early in my career, I didn’t have a heck of a lot of pressure on me to the point they needed me to win every match. There was Barry Davis, Ed Banach, Lou Banach, Jimmy Zalesky, Duane Goldman — all really good guys in the lineup.”

During Heffernan’s tenure, the Hawkeyes won 70 of 74 dual meets with four Big Ten championships and three NCAA championships. Iowa was runner-up to Iowa State in 1987.

Heffernan remains involved in wrestling, nearly 30 years after graduating from Iowa. He enters his seventh season as head coach at the University of Illinois, where he has a record of 61-36-2. Last season the Illini were 13-5 and 12th at the NCAA Championships. Illinois freshman 157-pounder Isaiah Martinez won 35 consecutive matches on his way to individual conference and national titles. Heffernan spent 17 seasons as an assistant coach for the Illini, two at Oregon State, and two at Lehigh.

“There is hardly a day that goes by where I don’t think of similar situations of when I was at school and how coach Gable would have dealt with those situations or how he handled them,” Heffernan said. “I have been lucky with the mentors I have had.”

Heffernan laughs often when thinking back on interactions with his former coach, like the moment Gable offered a scholarship. The conversation took place in Gable’s office in the Field House, a place Heffernan described as a broom closet with enough room for a desk; he had to turn sideways to sit in a chair.

“I sat across this desk from Gable and he is a get-to-the-point type of guy,” Heffernan said. “He looks at me and asks, `Are you going to come to Iowa?'”

Heffernan wanted to first fly home and talk things over with family to make sure it was a good fit.

That wasn’t the answer Gable wanted to hear.

“(Gable) looks at me and said, `I can tell you two things. If you don’t come here, I’m going to find someone to beat you; and when you come to your senses and tell me you want to commit to Iowa, give me a call,” recalled Heffernan.

The 2015 class was inducted into the National Iowa Varsity Club Athletics Hall of Fame on Sept. 4– the night prior to the Iowa football team’s season opener against Illinois State. Heffernan and the six other inductees will be recognized at halftime of the Iowa-Illinois State football game Sept. 5.