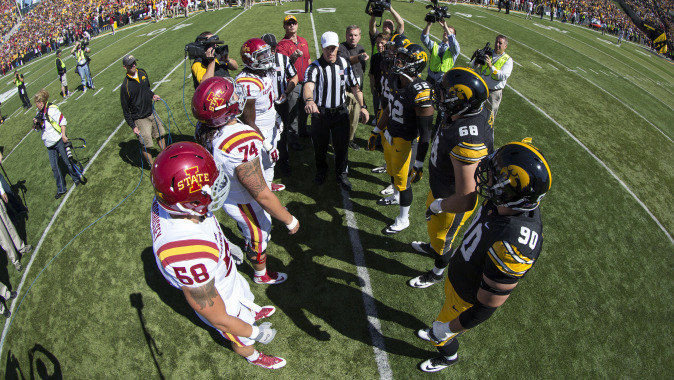 Mount Pleasant’s Henry Krieger Coble will start for the Hawkeyes at tight end. He is one of six UI starters from the state of Iowa.

While Iowa rolled to a 31-0 lead and 431 total yards against No. 2 Illinois State, the Cyclones were having their way with No. 10 Northern Iowa to the tune of 31 points and 310 yards. They added 193 punt return yards.

“I love the competition,” said UI senior wide receiver Jacob Hillyer. “We want to show up and have a good game to play. Any competitor does.”

“It is always going to be fun,” Mabin said. “These guys are good, we have watched film on them, we have experience with them in the past, so we look forward to it.”

One player who has not had on-field involvement with the rivalry in the past is UI junior quarterback C.J. Beathard.

“You can’t listen to the outside noise because there are a lot of people trying to hype this game,” said Beathard, who began the season by completing 15-of-24 passes for 211 yard and a touchdown. “We know it’s a big game for us, it’s a big game for them, too. We respect them and know they are a good team. We have to focus on us, improve every way we can, and practice well this week and go out there and show it on the field.”

The Hawkeyes own a 24-14 edge in the Iowa Corn Cy-Hawk Series since the rivalry renewed in 1977 after a 43-year hiatus. Iowa State has won three of the last four games, including 20-17 last season in Kinnick Stadium on a 42-yard field goal by Cole Netten with two seconds remaining.

“Any loss is tough, but an in-state rivalry like that makes it even tougher,” Beathard said. “They have bragging rights all year.”

The last four Iowa-Iowa State games have been decided by a total of 15 points; the 2011 game went triple overtime.

UI senior defensive end Drew Ott, who had two sacks against Illinois State, is ready for another nail-biter.