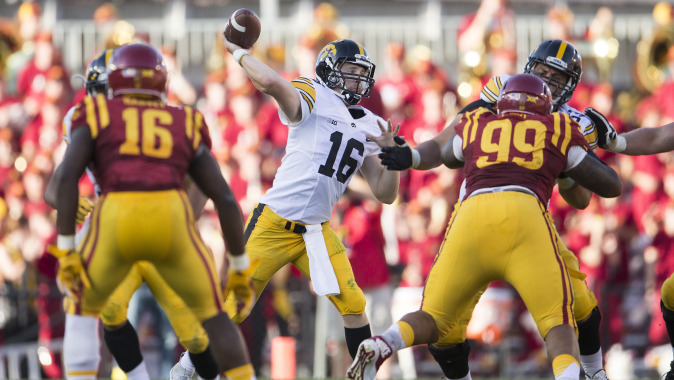 IOWA CITY, Iowa — University of Iowa quarterback C.J. Beathard has been named Big Ten Conference Co-Offensive Player of the Week for his performance in Iowa’s 31-17 win at Iowa State this past Saturday.

Beathard completed 15-of-25 attempts for 215 yards and three touchdowns at Iowa State, with no interceptions, as Iowa rallied from a 17-10 halftime deficit with 21 unanswered points in the second half. He also rushed 10 times for 77 yards, including runs of 44 and 57 yards. His scoring strikes covered three, 14, and 25 yards, with the 25-yard score giving Iowa the lead with 2:14 remaining in the fourth quarter.

Beathard and the Iowa offense tied the game at 10-10 in the second quarter on a 93-yard scoring drive that featured a 44-yard Beathard run and a 19-yard completion to Jordan Canzeri. The score came on a 14-yard strike to Tevaun Smith.

Beathard completed a 25-yard pass to Riley McCarron to give the Hawkeyes the lead with 2:14 remaining in the final period before Canzeri ended the scoring with an eight-yard run with 1:05 left to play. Beathard completed 10-of-13 pass attempts for 159 yards and two touchdowns in the second half.

In leading Iowa to consecutive wins to open the season, Beathard has completed 30-of-49 attempts for 426 yards and four touchdowns, with no interceptions. He also has 18 rushing attempts for 103 yards and two touchdowns. Beathard is the first Iowa quarterback, in the Kirk Ferentz era, to amass more than 400 yards passing and 100 yards rushing through the first two games of a season.

Iowa (2-0) entertains Pittsburgh (2-0) Saturday (7:12 p.m., BTN) in Kinnick Stadium. Tickets are on sale for Iowa’s six remaining home games, and are available online at hawkeyesports.com, by calling 1-800-IA-HAWKS, or in person at the UI athletics ticket office located in Carver-Hawkeye Arena.