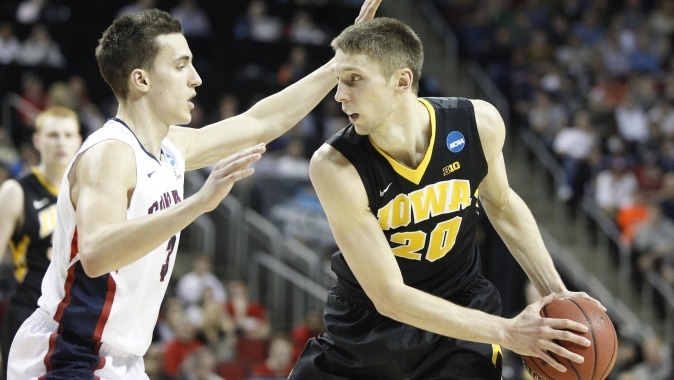 ROSEMONT, Ill. — University of Iowa senior forward Jarrod Uthoff is one of 10 men’s basketball players selected to the 2015 Preseason All-Big Ten team as selected by a media voting panel. The Big Ten Conference office made the announcement Wednesday afternoon.

Uthoff (6-foot-9, 220 pounds) was a third-team all-conference and first-team academic all-district honoree a year ago, helping the Hawkeyes to a third place Big Ten finish and to the third round of the NCAA Tournament. Uthoff ranked second on the team in scoring (12.4 ppg.), rebounding (6.4 rpg.), steals (1.1 spg.), and blocked shots (1.6), and first in 3-pointers made (54) as a junior. The Cedar Rapids, Iowa, native was the only Division I player to amass 55+ blocks, 50+ 3-pointers, and 35+ steals.

Maryland’s Melo Trimble was selected as the Preseason Big Ten Player of the Year.

Iowa will hit the court for the first time Oct. 29, hosting the University of Sioux Falls in an exhibition contest on Mediacom Court at Carver-Hawkeye Arena at 7 p.m. (CT).

Unanimous selections in ALL CAPS