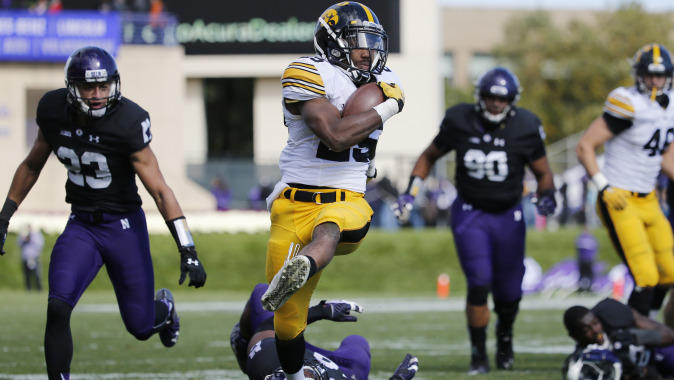 EVANSTON, Ill. — What is it about Akrum Wadley when he faces Northwestern?

The University of Iowa sophomore running back carried the ball 26 times for 204 yards and four touchdowns Saturday, leading the No. 17 Hawkeyes to a 40-10 win over the No. 20 Wildcats on Ryan Field.

Here is the Wadley file:

He has two 100-yard rushing performances in his college career and both are against Northwestern. On Nov. 1, 2014, during a 48-7 Hawkeye win in Kinnick Stadium, Wadley ran 15 times for 106 yards and a touchdown.

In his other 10 career games, Wadley has rushed a total of 25 times for 115 yards and a touchdown.

Iowa’s pregame plan included Wadley, especially since starting senior Jordan Canzeri was coming off a monster performance against Illinois (a 29-20 Hawkeye victory Oct. 10) where he had 43 attempts, 256 yards, and two pass receptions.

Wadley’s role immediately increased when Canzeri left the game with a left ankle sprain on Iowa’s first play of its fourth drive in the first quarter.

“I hope Canzeri can get healthy before we play (Oct. 31), but we have four great backs that are a big play waiting to happen,” said Wadley, a 5-foot-11, 185-pounder from Newark, New Jersey. “Any one of us is capable of making big runs and I just stepped up to the plate.”

In the process, the Hawkeyes improved to 7-0 overall, 3-0 in the Big Ten Conference. Iowa is the only undefeated team in the West Division.

Like so many Hawkeye wins that have come before, this one was credited to a resilient team effort. Next guy up, next guy ready, UI head coach Kirk Ferentz says. On Saturday, it was Wadley’s turn.

“We were hoping to piece anything together, we have a lot of moving parts,” Ferentz said. “That was a little concerning when Jordan came out, but I can’t say enough about Akrum. He came up big when we needed him. The (offensive linemen) up front — with a makeshift lineup — kept doing good things. It was a total team effort.”

Iowa paid no attention to those statistics and paid less consideration to who was blocking for whom.

“We have to keep working and keep the next running back clean and let him run,” Walsh said. “There was never any doubt of Akrum’s ability or any of our running backs’ ability. Akrum had his shot and he did a great job.”

“It is a huge confidence booster, but like I said last year around this time, I’m not trying to get too comfortable because it can get snatched up real quick,” Wadley said. “I just want to continue doing what I do in practice, which is holding onto the ball and whenever I’m falling down secure it with two hands. Then let everything else play out.”

Things played out well for Wadley on Saturday as he became the first player to surpass 100 rushing yards this season against Northwestern. He is the third Hawkeye to top 100 in a game, joining junior LeShun Daniels, Jr. (123 versus Illinois State) and Canzeri (124 at Iowa State, 115 versus North Texas, 125 at Wisconsin, and 256 versus Illinois).

“I knew our offensive line would open holes for me and all I had to do was run behind them,” Wadley said. “I know (fullbacks) Adam Cox and Macon Plewa were in the game — they lightened the load for me. All I had to do was make cuts off their blocks.”

Iowa welcomes a bye week before returning home to face Maryland on Oct. 31.