Meet the 'Next Men In' 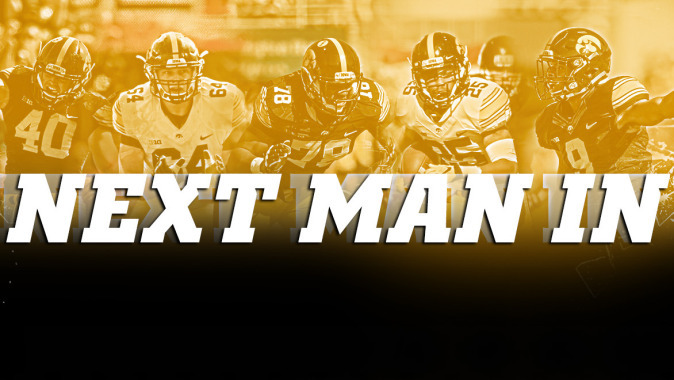 IOWA CITY, Iowa — In a sport as physical as football, it’s uncommon to go through a full season without injuries to your starting core. The Hawkeyes know that all too well.

The University of Iowa enters the bye week Saturday, 7-0, despite injuries to a handful of key personnel, including five opening day starters.

How have the Hawkeyes done it? The football program continues to produce a stable of personnel prepared to play anytime, anywhere. They come from all places, and in all shapes and sizes. Some are fourth-year juniors; others are first-year freshmen. Some are walk-on transplants; others are blue-chip legacies. Some show up in the record books, others show up only in the participation report.

As individuals, their powers are unique; but collectively, they wear the badge: “Next Man In.”

Offensive lineman Cole Croston has seen action in all seven games, but saw his time on the field increase when Boone Myers went down with an injury in Week 4. Croston made his first start in Iowa’s win road win at Wisconsin and has started Iowa’s last three games at left tackle, protecting the blind side of quarterback C.J. Beathard. Iowa has rushed for 716 yards in Croston’s three starts, but his contributions go beyond pass protection and ground patrol. In his first career start at Wisconsin, the junior from Sergeant Bluff, Iowa, helped preserve field position by recovering an Iowa fumble.

Offensive lineman James Daniels is one of four true freshmen to see action this season. Due to injuries to Boone Myers and Ike Boettger, Daniels has seen time at guard and tackle. Daniels, the younger brother of junior running back LeShun, started his first game last week at Northwestern and created holes large enough to accommodate 294 rushing yards. He is only the third true freshman to start on the offensive line since 1999. The native of Warren, Ohio, has seen action in all seven contests.

Redshirt freshman Parker Hesse saw his first action in Iowa’s 31-17 triumph at Iowa State. Hesse replaced senior defensive end Drew Ott, who left in the second quarter due to injury. Hesse and the Hawkeye defense held the Cyclones to 66 total yards, including five rushing yards, in the final 30 minutes to help ignite Iowa’s second-half comeback. Hesse started his first career game the following week versus Pittsburgh, and against North Texas in Week 4, he recorded a career-high six tackles off the bench. Ott suffered a season-ending injury two weeks later against Illinois, and Hesse was back in the starting lineup for Week 7. For the season, the native of Waukon, Iowa, has 16 tackles, including a sack, and fumble recovery.

Senior receiver Tevaun Smith was unable to play against Wisconsin and Illinois because of injury, clearing the way for true freshman Jerminic Smith to make his first career start. Despite not catching a pass in Iowa’s win at Wisconsin, Smith was able to stretch the field with his speed. One week later, the native of Garland, Texas, caught four balls for 118 yards against Illinois, becoming the first true freshman in the Kirk Ferentz era to record 100 yards receiving in a single game.

Prior to Iowa’s win at Northwestern, Akrum Wadley had eight carries for 35 yards and one touchdown through six games. His time on the field was limited as Iowa’s No. 3 back, but injuries to Jordan Canzeri and LeShun Daniels, Jr., thrust Wadley into a featured role against the Wildcats. The sophomore from Newark, New Jersey, rose to the occasion to the tune of 204 yards on 26 attempts, both career bests, and tied a school record with four rushing touchdowns.