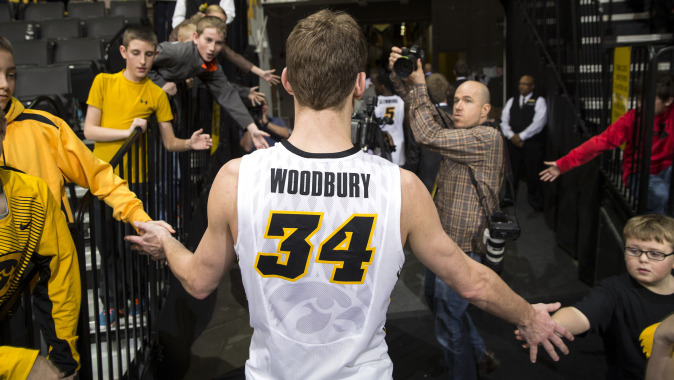 THE SETTING
Iowa will host Sioux Falls in an exhibition contest on Thursday, Oct. 29, on Mediacom Court at Carver-Hawkeye Arena in Iowa City. Tipoff is set for 7:05 p.m. (CT).

ON THE AIR
Radio: Iowa games are broadcast on the Hawkeye Radio Network. Gary Dolphin handles the play-by-play, along with color commentator Bob Hansen. The network includes more than 40 stations that blanket the state of Iowa and include portions of Illinois, Nebraska, Minnesota, Missouri and Wisconsin. The Hawkeye Radio Network coverage includes a 60-minute pregame show.
Streamed: Thursday’s game will be streamed on BTN Plus (BTN2GO). There is no TV coverage of the exhibition contest. Rob Brooks and Adam Lacey will call the action.

EXHIBITION QUICK HITS
? Tickets can be purchased at the UI Ticket Office. Tickets are $5 for adults and FREE for youths and UI students.
? Iowa returns seven letterwinners, including four starters, in 2015-16.
? Jarrod Uthoff was one of 10 players named to the Preseason All-Big Ten team as selected by a media voting panel.
? Iowa has won 32 of its last 33 nonconference home games, dating back to November 2011.
? Iowa will play a second exhibition contest on Friday, Nov. 6, against Augustana (South Dakota).
? Iowa has competed in postseason play the last four years: NIT second round in 2012; NIT runner-up in 2013; NCAA first round in 2014; NCAA third round in 2015. The Hawkeyes tied for third place in the Big Ten last season — its best finish in nine years.
? Iowa sold out 16 home games the last two seasons. The Hawkeyes ranked 20th in national attendance in 2015.
? Iowa won 21 regular season games last season, the most by a Hawkeye team since 2006 (22).
? Iowa has won at least 20 games in three consecutive seasons — its longest streak in 15 years.
? Iowa averaged 11.1 turnovers in 2015, which is the best average for fewest turnovers in program history since turnovers became an official stat in 1980.
? Iowa was one of only 15 schools nationally to compete in both the men’s and women’s NCAA Tournament, while also sending their football team to a bowl game.
? Three Hawkeyes on the roster earned their undergraduate degrees last May: Mike Gesell, Jarrod Uthoff, and Okey Ukah. Gesell earned his degree in three years.
? Iowa is 39-6 when scoring 80 points or more, the last five seasons. The Hawkeyes are 55-2 when holding opponents to fewer than 61 points, the last five years.

McCAFFERY APPROACHES MILESTONES
Fran McCaffery will coach in his 600th career game as a head coach in Iowa’s regular season opener against Gardner-Webb on Nov. 13, in Iowa City. He has compiled a record of 347-252 in 19 seasons as a head coach. Also, he has amassed 96 wins as an Iowa head coach in five seasons; McCaffery is four wins from notching win No. 100 as a Hawkeye.

SCOUTING SIOUX FALLS
? Sioux Falls posted an 8-21 record last season.
? Guard Mack Johnson is the team’s leading returning scorer, averaging 15.1 points per game as a sophomore last season.
? Sioux Falls has one Iowa native on its roster, Jordan Stotts. The senior hails from Waukee. The forward played in all 29 games, averaging 7.9 points and 3.7 rebounds last season.
? Chris Johnson is in his eighth season at the helm of the program and has a career record of 140-107, including 124-92 at Sioux Falls. Since taking over in 2008, Johnson has guided the Cougars to four 20-win seasons, three postseason appearances, two conference tournament championships, and one regular season conference crown.

HAWKEYE FAST BREAKS
? Iowa’s free throw percentage a year ago (74.4 percent) was the fourth best in program history for a single season.
? Iowa was the first team in the country to post road wins over two ranked opponents last season: No. 12 North Carolina (60-55) on Dec. 3 and No. 18 Ohio State (71-65) on Dec. 30.
? The Hawkeyes won seven true road games last season, including winning its final six regular-season Big Ten games for the first time since 1955. The seven total road wins were the most by a Hawkeye team since 1987.
? Iowa’s 12 conference wins last season are the most by a Hawkeye team since 1997. Also, its third place finish was its best in nine seasons.
? Iowa was one of only two teams to record a win at Ohio State last season (Wisconsin).
? Junior guard Anthony Clemmons made 17 of his last 19 (.895) free throw attempts combined the last eight games.
? Mike Gesell’s five assists against Gonzaga in last season’s NCAA Tournament moved the point guard into a tie with Kenny Arnold (1979-82) for eighth place in career assists (352).
? Adam Woodbury collected six assists to go along with his 11 points at Michigan last season. Woodbury became just the third Big Ten 7-footer to post 10+ points and 6+ assists in a game since 1996-97.
? Iowa’s 83-52 dominant performance over Davidson in the NCAA Second Round was the program’s first tournament win since 2001. It also marked the largest margin of victory in an NCAA Tournament 7/10 match-up.
? Iowa has had a first-team All-Big Ten honoree in each of the last two seasons: Devyn Marble in 2014 and Aaron White in 2015.
? Iowa is 39-6 when scoring 80 points or more, the last five seasons. The Hawkeyes are 55-2 when holding opponents to fewer than 61 points, the last five years.

FLOCKING TO CHA
Iowa sold out 16 home games the last two seasons. The Hawkeyes ranked 20th in national attendance in 2015, averaging 14,101 fans. It is the second straight season and 21st time that Iowa has cracked the top 20 in the national attendance rankings. Additionally, Iowa played in front of 475,998 fans in its 34 games (home, away, and on neutral courts) throughout the season. That figure ranked 13th in the country. As a conference, the 14 Big Ten schools averaged 12,781 fans to lead in the nation in average attendance for a 39th consecutive season. More than three million fans witnessed Big Ten games in person throughout the course of the 2014-15 season. For the second consecutive year, Iowa was one of seven Big Ten schools to rank in the top 20 nationally.

UTHOFF, GESELL, WOODBURY EARN ACADEMIC DISTINCTION
Mike Gesell and Jarrod Uthoff were named 2015 Capital One Academic All-District first team honorees for their combined performance athletically and in the classroom. Gesell was also tabbed third team Academic All-America, becoming the first Hawkeye to accomplish the national distinction since Adam Haluska (first team) in 2007. Gesell, a native of South Sioux City, Nebraska, earned his degree in finance in three years. He led the team in assists (135) and ranked sixth in the Big Ten in assist-to-turnover ratio (2.2). Gesell averaged 7.4 points per game. Last fall, Gesell earned invitation to Beta Gamma Sigma, the National Scholastic Honor Society for business students at the University of Iowa who have garnered GPA’s that place them in the top 10 percent of their class. Uthoff, a native of Cedar Rapids, Iowa, graduated last May with a degree in economics. Uthoff ranked second in team scoring (12.4), rebounding (6.4) and steals (38), and was first in blocked shots (56) and 3-point shooting (54-of-145, .372). Additionally, Gesell, Uthoff, and Adam Woodbury were named 2015 Academic All-Big Ten.

UTHOFF PRODUCING ON THE WING
Jarrod Uthoff, who was named third-team All-Big Ten last season, ranked second in team scoring (12.4 ppg), and steals (1.1), and first in 3-point shooting (54-of-145, .372). He was the only Division I player to have 50+ 3-pointers, 55+ blocks and 35+ steals. Additionally, Uthoff was one of only two Big Ten players to average 12+ points, 6+ rebounds, and 1.5+ blocks (Wisconsin’s Frank Kaminsky). Uthoff is one of 10 men’s basketball players selected to the 2015 Preseason All-Big Ten team as selected by a media voting panel. His 56 blocks and 54 triples rank fourth and fifth best, respectively, by an Iowa junior in program history. Uthoff had two double-doubles in 2014-15 (North Florida and Michigan State). He had 10 points and a personal-best 12 boards against North Florida (Dec. 22), and 12 points and a team-best 10 rebounds versus Michigan State (Jan. 8).

FRESH START
Peter Jok made his first start of his career on Dec. 22, 2014, versus North Florida. The native of West Des Moines, Iowa, started 21 of the last 22 games. Jok is starting 2015 with a new number, changing from No. 3 last year to No. 14 this season. Jok averaged seven points per game in 2015, which ranked fifth on the squad. He made at least one triple in 18 of the last 25 games, including multiple 3-pointers in seven of the last 13 contests. Jok’s 36 triples in 2015 rank as the sixth most by a Hawkeye sophomore in program history. His 19 steals, 44 assists, 83 field goals and 36 treys last season were single season bests. He scored 12 points in Iowa’s win over Davidson, while grabbing five rebounds. Jok reached double figure scoring in two of three NCAA Tournament games played (Tennessee in 2014 and Davidson in 2015).

EXPERIENCED BACKCOURT
Iowa has two senior point guards (Mike Gesell and Anthony Clemmons) and a junior shooting guard (Peter Jok) on this season’s roster. Clemmons, who has started 25 of 104 games, was named the team’s Most Improved Player last spring after leading the team in 3-point accuracy (.373) and posting single-season bests in rebounding, steals, scoring average, and free throw percentage. Gesell is a three-year starter and enters his senior year with 805 points, 352 assists, and 116 steals.

MUSCLE GAIN
Last season, freshman Dom Uhl was listed a 6-foot-8 and 195 pounds at the start of the season. After a year in the weight room, the sophomore forward checks in a 6-foot-9 and 215 pounds entering this season. Uhl earned the team’s Newcomer Award last year.

GESELL NOMINATED FOR GOOD WORKS TEAM
Senior Mike Gesell is a nominee for the 2016 Allstate NABC Good Works Team. This prestigious community service award recognizes a distinguished group of student-athletes who have demonstrated a commitment to enriching the lives of others and contributing to the greater good in their communities. College sports information directors and basketball coaches across the country nominated players who exhibit exceptional leadership skills and an unwavering commitment to volunteerism.

McCAFFERY’S HONORED WITH FIGHTING SPIRIT AWARD
The American Cancer Society honored Fran and Margaret McCaffery with the Fighting Spirit Award, Sept. 30, in Troy, New York, at the 10th Anniversary Coaches vs. Cancer Basket Ball. The McCaffery’s were honored for bringing attention and their tremendous amount of fundraising for cancer research. McCaffery was also honored with the Coaches vs. Cancer Champion Award during Final Four Weekend in Indianapolis last April. The honor is awarded annually to a college coach who has been engaged vigorously in the Coaches vs. Cancer program’s fundraising, education and promotional initiatives and has demonstrated leadership in the fight to save more lives from cancer.

COACHING EXPERIENCE
Fran McCaffery has the most experienced coaching staffs in the country. The Iowa men’s basketball staff has 67 years of combined collegiate head coaching experience and more than 130 years of collegiate coaching under their belts. Iowa ranks first, followed by Indiana and Tulsa.

IOWA TO PLAY IN ADVOCARE INVITATIONAL IN NOVEMBER
Iowa will be one of eight teams to compete in the Advocare Invitational, Nov. 26-29. The games will take place at the HP Field House at the ESPN Wide World of Sports Complex near Orlando. Five of the eight teams competed in the NCAA Tournament this past spring: Dayton, Iowa, Notre Dame, Wichita State, and Xavier.

HY-VEE BIG FOUR CLASSIC TICKETS ON SALE OCT. 30
The state’s four NCAA Division I men’s basketball teams will be in action in the same venue for the fourth consecutive year at Wells Fargo Arena on Saturday, Dec. 19. The first game of the doubleheader will feature Drake and Iowa beginning at 3:30 p.m. The game will be broadcast on ESPN3.com. Iowa State and UNI will play the second game at 6 p.m., with the game being broadcast on ESPNU. Tickets, which range in price from $25-70, go on sale Friday, Oct. 30 at 10 a.m. exclusively through Hy-VeeTix.com, 844-55-HYVEE, 22 Hy-Vee Stores in Des Moines and Ames, or the Wells Fargo Arena Box Office. Tickets are good for admission to both games of the doubleheader. One of the marquee basketball events in the Midwest, the Hy-Vee Big Four Classic will look to grow its attendance for the fourth straight year. More than 13,000 fans have turned out for each year of the event, including a record 15,124 fans streaming through the Wells Fargo Arena turnstiles in 2014.

ON THE HORIZON
Iowa will play another exhibition game on Friday, Nov. 6, hosting Augustana (South Dakota). Tipoff is set for 7:05 p.m. (CT) on Mediacom Court at Carver-Hawkeye Arena.