`Good Team Victory' For No. 10 Hawkeyes 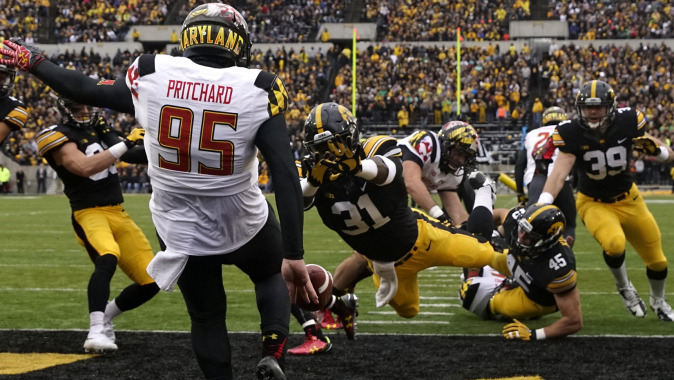 Those were the 21st through 24th words to come out of University of Iowa head coach Kirk Ferentz’s mouth Saturday after his 10th rated Hawkeyes improved to 8-0 on the season with a 31-15 victory over Maryland in Kinnick Stadium.

And nothing summarized good team football like the final 10 plays of the first half.

It started innocently enough with a 38-yard punt by UI senior Dillon Kidd that was downed at Maryland’s 3-yard line with Iowa ahead 14-0 and 2:07 left before the break.

“Dillon Kidd had a tremendous day punting and he dropped that one right down there,” Ferentz said.

Kidd averaged 37.4 yards on five punts and placed three inside the 20. Four of his kicks gave Maryland starting field position at its own 23, 3, 18, and 3.

The ensuing drive by the Terrapins went like this:

“The defense got a good stop and we got the tip on the punt,” Ferentz said.

The Hawkeyes began their drive with a holding penalty, but quarterback C.J. Beathard got that yardage back on first-and-20 by completing a 12-yard pass to wide receiver Jacob Hillyer. The next play was a 15-yard completion from Beathard to tight end Henry Krieger-Coble that took the ball to Maryland’s 2. Beathard spiked the ball on first down, threw incomplete to Matt VandeBerg on second, and handed off to Derrick Mitchell, Jr., who on third down, dove into the end zone from 2 yards out.

“The offense took it and put it in the end zone, so it was a really good sequence to end that first half,” Ferentz said.

Especially since the Terrapins would receive the second-half kickoff.

“I don’t know how good we are as a football team, but our guys are playing hard and they play together,” Ferentz said. “I’m proud of them and to move to eight (wins) is a significant accomplishment.”