4 Heads are Better Than 1 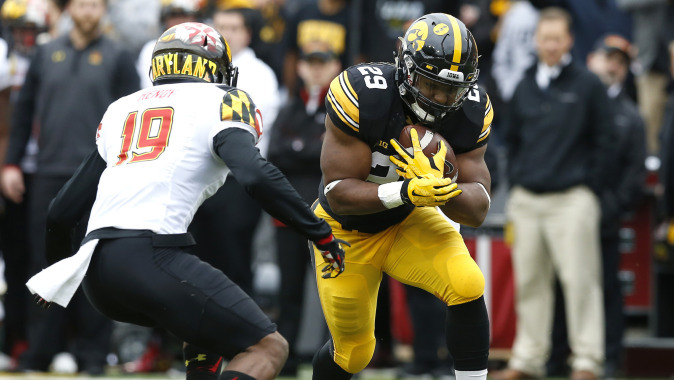 IOWA CITY, Iowa — With its leading rusher and scorer in street clothes Saturday, the University of Iowa football team turned to a three-headed monster of Akrum Wadley, LeShun Daniels, and Derrick Mitchell during a 31-15 victory over Maryland inside Kinnick Stadium.

The undefeated and top 10 ranked Hawkeyes (8-0) knew they would meet Maryland without the services of senior running back Jordan Canzeri. When Canzeri left in the first quarter against Northwestern on Oct. 17, he had already compiled season totals of 698 rushing yards and 60 points.

There was no need to fear. Against the Terrapins, 18 of Iowa’s first-half points came via touchdown runs by Daniels (1 yard), Wadley (11 yards), and Mitchell (2 yards).

Iowa has played three teams this season that didn’t have their primary rushing threat in the lineup and the Hawkeyes defeated them all: Pittsburgh (27-24), Wisconsin (10-6), and Illinois (29-20). The Panthers rushed for 55 yards, the Badgers 86, and the Illini 46.

Iowa adapted much better without its leading ground gainer. Against Maryland, Wadley and Daniels combined for 127 yards on 32 carries; Mitchell caught two passes for 24 yards and his only rushing attempt resulted in a key touchdown with :09 left before halftime.

“It is emblematic of the way the team has been playing,” UI head coach Kirk Ferentz said. “It seems like when someone can’t go or can’t contribute, then somebody else jumps in there and does it.

“A lot of good things happened (against Maryland) and one of the best things I saw is it looked like LeShun is back to being LeShun Daniels again. We haven’t seen that in a while. I was proud of the way Akrum ran and protected the football and Derrick did a good job while he was in there.”

Iowa finished with a season-low 110 rushing yards on 44 carries, but the Hawkeyes were effective when needed. Wadley picked up 67 yards on 19 attempts and Daniels gained 60 yards on 13 carries.

And all three realize they couldn’t do it without a front line of Boone Myers, Sean Welsh, Austin Blythe, Jordan Walsh, Cole Croston, as well as assorted bulldozing tight ends and fullbacks.

“Any one of us can be a playmaker and we can make big plays, it doesn’t matter,” said Wadley, who ran for 204 yards at Northwestern. “But the offensive line lightens the load. All we have to do is follow where they open it up, see a seam, and hit it.”

“I was happy I got in there running behind the offensive line,” Mitchell said. “They did great.”

Canzeri wasn’t adding to his yardage or point total Saturday, but he was padding his leadership stats.

“It might sound funny but it felt like Jordan was with us every step of the way,” Wadley said. “He was helping me clean my visor; he was guiding me and telling me everything, so it was like he was playing with us. He is a great leader.”

In Canzeri’s absence, the Hawkeyes displayed shifty (Wadley), ground-and-pound (Daniels), and good hands (Mitchell). Although there are no defined roles among the three, Mitchell says he fits in nicely on third down. On Iowa’s first series, quarterback C.J. Beathard connected with Mitchell on a screen pass that went for 19 yards on third-and-10. His touchdown also came on third down, and put Iowa ahead, 21-0.

Canzeri has received the bulk of the rushing attempts this season (136), followed by Daniels (65), Wadley (53), and Mitchell (18). The beauty is that no one in the Hawkeye backfield is concerned about who gets how many attempts for how many yards.

“We are like brothers and we’re all going to eat together,” Wadley said. “It feels good and now we can celebrate together.”

“We have plenty of competition, but we’re always pulling for one another,” Daniels said. “None of us are selfish; whenever one of us scores, it juices all of us backs to get more touchdowns.”

But perhaps Mitchell said it best when a reporter told him that Iowa had three pretty good running backs out there against Maryland.

“Actually we have four, but one was down this week,” Mitchell said.