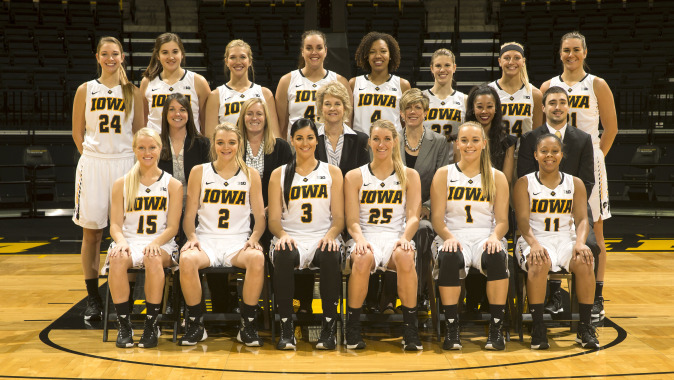 Hawkeyesports.com recently sat down with head women’s basketball coach Lisa Bluder to get her thoughts on the 2015-16 season. The Hawkeyes — 1-of-10 teams nationally and the only Big Ten team to play in the last 8 NCAA Tournaments — look to return to the NCAA Tournament for the 9th-consecutive season.

The program had its most successful season in your tenure last year, which included a Sweet Sixteen appearance. How has that run impacted Iowa women’s basketball?

It has had an impact in so many ways. It helps with fan support, people love a winner and like to enjoy a team’s success. Last year we went 18-0 inside Carver-Hawkeye Arena, we play an exciting style, and we win a lot. I think the fans have really paid attention to that and will support us moving forward. Recruiting is another aspect where success helps. When you’re advancing deep in the tournament and make it to the third round like we did last year, recruits pay attention to that. It puts you at a different level in their eyes. We ended the season ranked No. 11 in the country and that says a lot about our program.

You ended the 2014-15 with a 14th-ranked national attendance. How important is the fan support you receive?

When the fans come out and support this team, our players appreciate it so much. Our women work extremely hard every day to put the best quality product on the floor. When people come watch them and support them, it makes it all worthwhile. It helps you get through the tired moments and when things are going bad on the floor your fans can pull you out of that. I’m sure they’re a big reason we went 18-0 inside Carver-Hawkeye Arena last year.

Iowa has made eight-straight NCAA Tournament appearances. What does the team need to do to stretch it to nine?

That is the goal. We want to return to the NCAA Tournament and I think we can do it because we have two outstanding starters returning in Whitney Jennings and Ally Disterhoft. We also have Kali Peschel returning, who was our first person off the bench and the second best three-point shooter on our team a year ago. We have a great group of freshmen and sophomores that people don’t really know about yet. Our recruiting class was ranked No. 17 in the country and they are so excited to start their Hawkeye careers. I think that blend of youthful enthusiasm with the veteran experience we have returning will help get us to our ninth-straight NCAA Tournament.

You graduated arguably the most successful class in program history a year ago. Who do you see replacing the leadership of the Core Four?

It’s funny, every year you never know who your leaders are going to be. Sometimes you have an inkling, but there are always surprises. I think we may have a surprise again this year. That leadership may come from someone that we aren’t even thinking about yet. Kali Peschel and Ally Disterhoft are our team captains this season. Ally is one of our most experienced players and has been starting since she set foot on campus. Even though she is a junior, she has the experience and the leadership we need to take us back to the NCAA Tournament. Kali is a vocal leader who leads by example. She has blossomed in the last year at Iowa, and I’m excited to see her put her stamp on this program. There is also the opportunity for sophomore Whitney Jennings to step up and be a leader on our team as well.

There are three starting roles up for grabs. Has the competition increased in the gym?

We’re a bigger and deeper team, so the competition has been fierce. Everybody knows three starters have left our program and three spots are up for grabs. Every day we come to practice, people are playing at their very best. They have to come physically, mentally, and emotionally ready every day to compete to have a shot to start. When you’re fighting like that for those positions, it raises our level of play and our level of competitiveness.

You have eight underclassmen on the 2015-16 roster. How do you see them contributing?

Our four freshmen and four sophomores are going to make a lot of noise. Our freshmen class is highly regarded coming in with a No. 17 national ranking, so everyone expects big things out of them. Tania Davis and Megan Gustafson each had good Game Time League performances this summer and were on the championship team. Our sophomore class was quiet last year because we had that Core Four senior group that occupied so much of the attention, media, playing time, and fans. They didn’t have time to shine. Now is their time to shine.

The team set a single season scoring record again last year. Can Hawkeye fans expect to see the same fire from the offense?

That’s our style and it’s what we like to do. Our goal is to put up 80 or more points per game. To do that we need to develop that consistent three-point shooter like Melissa Dixon was for us, and an inside presence that can take the high percentage shots like Bethany Doolittle did. Those aspects are crucial if we want to score that many points per game again this season.

Your team got a head start in August with the Italian Tour and 10 practice days. How did that prepare this team?

Our Italian Tour could not have come at a better time. With eight underclassmen any extra practice time you have is a benefit. You need to get them integrated with your team, your philosophy, and what it takes to compete at this level. The sooner you can do that, the more success you’ll have early in the season. You only have 30 days of practice to prepare for each regular season, so 10 extra is a significant amount. We were able to accomplish a lot in those 10 practice days.

You will have a new floor general with the exit of All-American Samantha Logic. Who do you see running the offense?

Whitney Jennings was a point guard throughout her high school career. She’s used to having the ball in her hands and last year she had to learn to play without the ball in her hands. This year we’re going to ask her to go back to being a point guard more. Freshman Tania Davis can also play point guard, and I like the idea of both of those players on the floor together. Whitney will definitely play point guard, but you could also see her at some off guard as well. She’s going to have to relearn how to run a program and run a team, instead of focusing on her offensive production.

Ally Disterhoft has made big contributions as a freshman and sophomore. How do you see her role evolving as a junior?

Ally is going to have more of a leadership role. We know what she can do offensively and defensively. We’ve been challenging her more on the boards, and she has responded well to that in our 10 practice days and on our Italian Tour. She needs to be the enthusiastic and motivating leader who holds her teammates accountable. That is a role she didn’t have to assume her first two years here.

Kali Peschel was a spark in several signature wins a season ago. How do you see her building on that success in a senior role?

Kali Peschel was playing the best basketball of her Hawkeye career in the last two months of our season last year. As a senior, I hope Kali gets that starting position she’s been striving for because I think we’re a better team with her on the floor. She was that spark off the bench last year, but I think she’s worked hard to become a more consistent cog in our wheel. I hope to see that out of her in her final season.

How else do you see the freshman class contributing right off the bat this year?

All of them have the potential to contribute right away. Tania Davis definitely at point guard and off guard. She is very good defensively, is quick, handles the ball beautifully, and sets up the team unbelievably. She has a lot of great leadership skills as a freshman. Megan Gustafson will definitely fight for playing time at the center position. She had a great summer and is somebody that wants to be down on the block. She’s physical and is not going to shy away from contact. We need that presence inside, so I think Megan will be a factor this year. Hannah Stewart will definitely be able to help us because of her aggressiveness, rebounding, and shooting range, which has improved throughout the summer. Tagyn Larson has the three-point shot, the ability to put the ball on the floor, and fits in our system well. Plus at 6-1 she has the length we need.

Your coaching staff has been credited with creating the program’s family atmosphere. What makes your staff fit so well together?

One thing is longevity, Jan, Jenni and I are starting our 24th season together. But even Lacey, who is starting her third season, was such a great hire. She blends in with our philosophy, our values, and what we want to do professionally. She is a great match for us, and I think the four of us have similar values and work ethics. We all have strengths and weaknesses, but we balance each other out. We are such great friends and can be an example for our players on how to be, how to act, and how to get along.

How would you describe the personality of this year’s team with all of the changes?

I feel like they’re more boisterous and aggressive than last year’s team. Some of our younger players, like sophomore Carly Mohns, are more aggressive on the court than we have been in the past. I like that, especially when it benefits the rebounding and defensive aspects of the game.

How do you prepare for this year’s schedule with such a young roster?

We’ve always believed in challenging ourselves with a tough nonconference season and this year is no exception. We’re playing at Iowa State and we’re playing the three in-state schools. Drake is going to be a very good opponent in the Missouri Valley Conference, and then we have our B1G/ACC Challenge game at Virginia. We are going to be playing in a tournament in Austin, Texas, where we’ll play George Washington. That is also a team that historically strong.

You’re opening up the season at home with the Hawkeye Challenge. What is it like to expose the newcomers to that environment right off the bat?

We have such confidence playing inside Carver-Hawkeye Arena. We’re coming off of an 18-0 season at home, and we want to continue that tradition. We want opponents to fear playing us here and feel like they don’t have a chance coming to our arena. We need to set that tone early in the season and build that trust in ourselves that we are dominant on our home court. The Hawkeye Challenge is very important for establishing that. We’re also proud of our tournament. There aren’t many schools that can host a tournament and have the backing we have from our administration to do that. We have one of the longest standing women’s basketball tournaments in the country, and we’re proud of that.