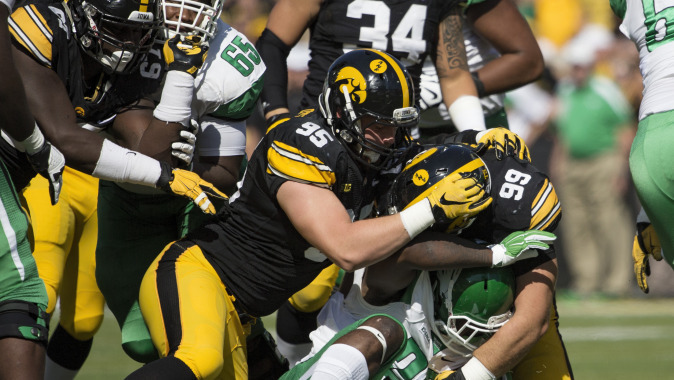 IOWA CITY, Iowa — Two members of the University of Iowa football program – – defensive back Jordan Lomax and defensive end Drew Ott – – have been named to the Capital One Academic All-District 6 first team. The announcement was made Thursday by the College Sports Information Directors of America (CoSIDA).

Lomax and Ott will now have their names placed on the national ballot for Capital One Academic All-America honors. The district honor is the second for Lomax and first for Ott.

Lomax (5-foot-10, 205 pounds) is a senior from Upper Marlboro, Maryland. He earned honorable mention All-Big Ten honors from league coaches as a junior after recording 92 tackles. Lomax has started all eight games this season at free safety, helping the Hawkeyes to eight straight wins. He is fourth on the team with 48 tackles, including 23 solo stops and 25 assists. He has one interception and four pass break-ups.

Lomax, a graduate of DeMatha Catholic High School, earned academic All-Big Ten honors each of the past two seasons. The economics major was named a Capital One District 6 Academic All-American a year ago and is a member of the UI’s Dean’s List. Lomax carries a 3.49 grade point average and has been a member of Iowa’s Leadership Group for the past three seasons.

Ott (6-foot-4, 272 pounds) is a senior from Trumbull, Nebraska. Ott will miss the remainder of the season after suffering an injury in Iowa’s win over Illinois. . He played only the first quarter in the win at Iowa State and played sparingly in a win over Pittsburgh due to injury. In six games Ott recorded 11 tackles, including 7.5 tackles for loss and five sacks. He was also tied for the Big Ten lead with three forced fumbles at the time of his injury.

Ott attended Giltner High School before joining the Iowa program. He earned second team All-Big Ten honors in 2014 and was one of six players in the Big Ten West Division named to the preseason Players to Watch List.

Ott is a Health and Human Physiology major who carries a 3.33 grade point average. He earned Academic All-Big Ten recognition each of the past two seasons and is a candidate for that honor this year. He is in his second year as a member of the team Leadership Group.

Following Saturday’s contest at Indiana (2:35 p.m. CT, ESPN), the Hawkeyes return home to host Minnesota (Nov. 14, 7 p.m., BTN) and Purdue (Nov. 21, TBA). Tickets remain for the Purdue game. Those tickets are available online at hawkeyesports.com, in person at the UI Athletics Ticket Office in Carver-Hawkeye Arena, or by calling 1-800-IAHAWKS. A $25 youth ticket is available for the Purdue game.