It's Stoll's Turn at Heavyweight 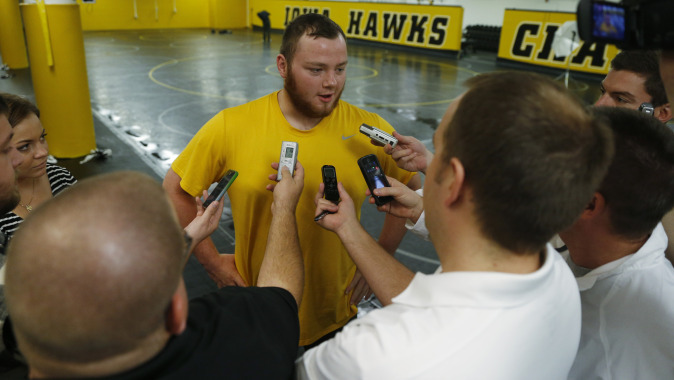 IOWA CITY, Iowa — Sam Stoll doesn’t want to be a typical heavyweight when he takes the mat Nov. 14 for the University of Iowa wrestling team.

“My goal is to get after it,” Stoll said during media day in the Dan Gable Wrestling Complex. “I want to be a heavyweight that scores points, not one that stands around. That’s what we’re taught here every day and what the coaches preach, and that’s what I want to do.”

Stoll spent his first season in Iowa City learning from three-time All-American Bobby Telford, a wrestler that finished his career with 108-27 record. Now he’s tasked with replacing him.

“He’s going to have a learning curve,” said UI head coach Tom Brands. “The biggest thing he has to realize is that it is about being your best every time out. If he can do that, he has a chance to be a good heavyweight.”

Stoll joined the Iowa wrestling program with a stellar resume, piling a 206-23 record at Kasson-Matoville (Minnesota) High School, which included a 99-match winning streak to close his career. He ended high school with 63 consecutive pins.

Coming in as a true freshman, Stoll wanted to be “the man,” but understood the process.

“You want to get out and compete and be the guy,” he said. “I am happy I redshirted and I was able to. If I would have gone to other programs that might not have been the case. Now I feel more ready to compete.”

“I improved everywhere, I don’t know if there was one specific area,” he said. “Going from high school to college there are some bigger learning curves as far as bottom and top wrestling. Wrestling against Telford, I worked a lot on hand fighting and got better.”

Telford’s tempo on the mat also rubbed off on Stoll, and it’s one he wants to emulate.

“Telford is a hard worker and the way he wrestles is something I have always liked,” said Stoll. “It’s one of the reasons I came here. He’s a tough wrestler on the mat and I think my style is a lot like his. He gets after it and that’s something he brought to me; to work hard and go after scores.”

Stoll compiled an 18-5 record with 10 falls and won the Luther and Grand View Opens, competing unattached, during the 2014-15 season. He knows the Big Ten is a different animal; six league heavyweights are in the top 20 in the preseason NWCA rankings.

“It’s going to be a grind, and I’m excited for it,” said Stoll. “That’s why you come to the Big Ten, you have to compete week-in and week-out.”

Stoll will make his debut in the Iowa lineup at the “Grapple on the Gridiron” inside Kinnick Stadium against preseason No. 1 Oklahoma State. Stoll squares off against fifth-ranked Austin Marsden.

“I am confident and determined,” Stoll said. “I am ready to get out and get after it.”