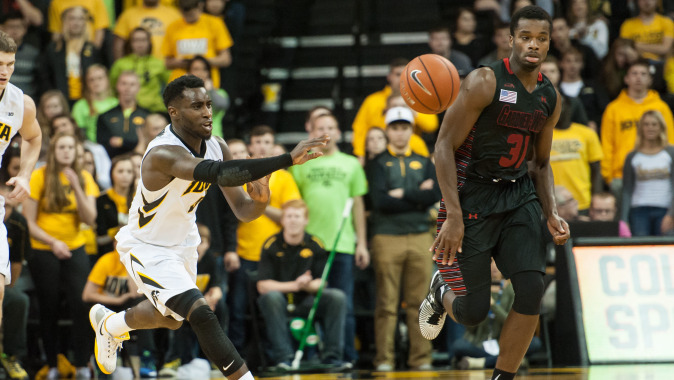 Q. You got a lot of energy from Dom Uhl when he came off the bench early, what did you see from him and in the beginning?
COACH MCCAFFERY: You know what, I saw the same thing I have seen from him all week in practice. I told him, I said, there’s two ways to handle adversity. He played two minutes last Friday night. Didn’t play well in those two minutes. Probably felt like he should have played more.

So there is one of two ways you handle the next week of practice and that’s why I went to him first, because he handled it very professionally and really impacted the game in a huge way in the first half. I thought he played with great energy the whole game and was pretty solid. Goofy turnover at the end, but we’re trying to hold the ball, so.

Q. Did you want to see Jarrod in the first half?
COACH MCCAFFERY: Yeah. It was funny because early he really wasn’t as aggressive as I really wanted him to be and as the half went on he just took over. He got his third. I would have put him back in again but we play at 4 o’clock on Sunday.

Q. Talk about the defense for awhile.
COACH MCCAFFERY: Happy with the defense in the second half. Not so much in the first half.

Coming into the game, you look at the stats from last Friday night, we got beat pretty handily on the glass. That’s how you lose at the buzzer. You get beat on the glass.

We did a lot of other things well that we wanted to do well. And we got beat in the first half on the glass again.

Now you look at the final numbers, 46-39, so we really did a great job in the second half. Of course we forced more misses too.

Q. You brought in Ahmad Wagner for the last nine minutes and you get six offensive rebounds, had some put backs. Is this what you’ve seen from him in practice?
COACH MCCAFFERY: Well, he really has been playing well. I should say had been playing well. And that’s why I was going to him early in the last two games. But then he hurt his shoulder so he’s been in and out of practice. And so that’s why I went to him later. He’s tremendous. He’s just a guy that really understands how to play. He understands what his strengths are and he’s just a phenomenal athlete with tremendous strength.

Q. A lot of different lineups tonight at times. What did you see that you liked out there?
COACH MCCAFFERY: I saw a lot of guys contribute and I think that’s the most important thing.

But you also have to make sure the older guys kind of get done what they needed to get done. I thought Woody tonight, his free throws in that one stretch, were really key. He got fouled twice, 4-4. That was big time.

I thought Mike and Clemmons handled the ball well, for the most part. Neither of them shot it well. Brady didn’t shoot it well.

Q. Were you happy with the shot selection?
COACH MCCAFFERY: His or everybody?

Jarrod, I thought his shot selection was really good. He’s a great contested shot maker. One of the best I’ve ever had.

But for the most part, I thought we shared the ball, moved the ball, they tried to press late, we attacked it well. That was good.

Q. You got a quick turnaround, two days, which is probably good for your team to get into that flow with a tournament coming up. But what do you do if Pete can’t go?
COACH MCCAFFERY: We’ll go with Brady. I could go big, I suppose. So, my tendency would be to go with Brady, but I could go with Dom, Dale, Ahmad, Baer, there’s a lot of candidates.

Q. Sounds like it wouldn’t be severe then.
COACH MCCAFFERY: Well, I don’t think it’s going to keep him out for three weeks or anything like that, no.