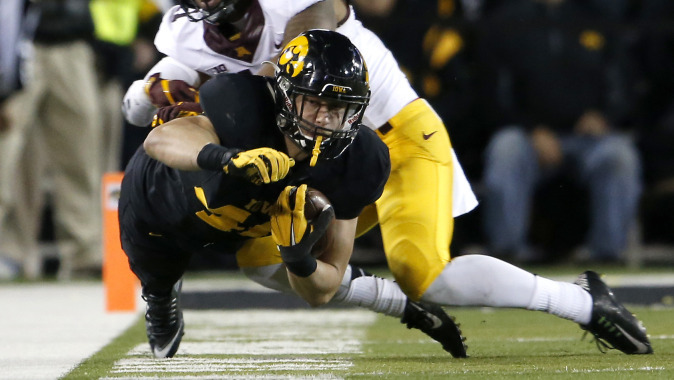 IOWA CITY, Iowa — Winning 10 consecutive football games is a lengthy expedition, but the University of Iowa reached that milestone Saturday with a 40-35 victory over border rival Minnesota.

The No. 5 Hawkeyes have embraced a game-by-game approach this season and they broke that down to a play-by-play attitude against the Gophers. Two of Iowa’s first half scoring drives spanned 91 or more yards: the opener was a 17-play series that covered 91 yards and took 8 minutes, 28 seconds. Right before the break the Hawkeyes went 97 yards in nine plays to take a 24-14 lead.

“Any time somebody moves a ball like that for that length of the field, it means somebody made a couple big plays,” UI head coach Kirk Ferentz said. “It takes guys coming up with big sparks and big third down catches. So a lot of good things are going on.”

Daniels, who rushed for 195 yards and three touchdowns, ran in from 3 yards to give the Hawkeyes a 7-0 lead.

The 97-yard drive ended 44 seconds before halftime. The biggest plays were a 32-yard pass completion from Beathard to Henry Krieger-Coble and a 26-yard run by Beathard.

“It’s not easy,” Beathard said. “It’s a tribute to the offense and playing tough and working their butts off. We ground it out with big drives and those were big drives in the game. That goes to show that no matter where you are on the field, we can score.”

“If we get backed up like that, we shake it off and say, ‘Alright, we have to go 95 yards,'” UI senior center Austin Blythe said. “It is a situation we work on in practice all the way back in camp. You just have to go out and execute and it takes 11 guys to do that.”

On the flip side is the toll a lengthy series takes on a defense. The Hawkeyes have not allowed a scoring drive of 90-or-more yards this season.

“It’s demoralizing when you’re on the opposite sideline,” Ferentz said.

“We have to give Iowa credit,” Minnesota head coach Tracy Claeys said. “They controlled the line of scrimmage in the middle. That was the difference in the game.”