All Signs Point to Progress for Iowa Rowing 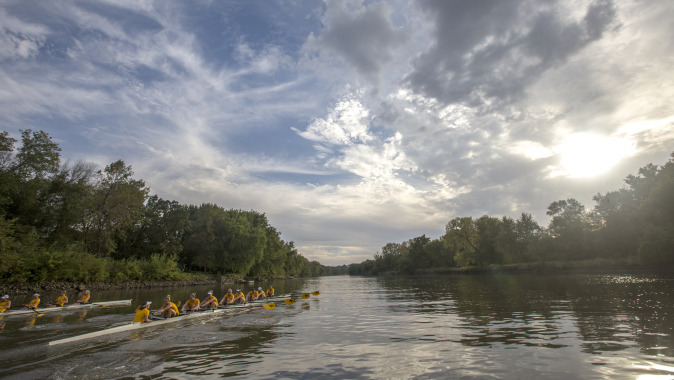 IOWA CITY, Iowa — Following the 2014-15 season, third-year University of Iowa head rowing coach Andrew Carter laid out specific standards for the Hawkeyes to meet when they returned to campus.

After rising to the occasion in four fall events, all signs point to progress.

“The fall season went well, and it’s an extension of good preparation during the summer,” Carter said. “The student-athletes accepted the challenge at the end of the spring and came in and met the standards that were established. We were able to move forward with more aggressive competitive plans; plans that reflected their level of preparation.”

Iowa got its first taste of competition at the Head of the Des Moines Regatta, earning the collegiate trophy with top finishes in women’s collegiate eight, collegiate four, and novice eight events. Iowa’s top eight posted the fastest time across all levels of the competition field.

“Retaining a lot of the cups that we had from last year’s Head of the Des Moines was a terrific start,” Carter said. “What made the results more significant was that we faced another Big Ten team in Minnesota, a team that edged us at the Big Ten Championship last spring.”

The Hawkeyes also came away with two additional top five spots in the event. The second and third crews both bested the second Gopher crew in the three-mile course.

“It set the tone for the day,” said Carter. “It was the first moment we were able to feel the rewards of a diligent summer of training. With Minnesota there, the level of competition kicked up. It was not only an exciting moment for the team, it was a moment where things began to come into focus for them.”

The momentum carried the Hawkeyes into the championship four event. Iowa earned the top four positions, finishing 12 or more seconds ahead of all other competitors and a minute ahead of Minnesota.

The novice eight capped the fall opener with a win, besting its nearest competition by more than two minutes.

“This was only the tip of our talent transfer iceberg,” said Carter. “We have more than 50 women who have walked on this year, and we selected the top eight rowers and one coxswain to open their season at Des Moines. It’s early for these women to jump into racing, but we wanted to expose a small group to their first regatta.

“The expectation was that they’d take the story back to the others and the excitement seeds would be planted. Their result was the perfect food for those seeds.”

The Hawkeyes returned to Iowa City for a solid week of training before welcoming Indiana for two days of scrimmage action on the Iowa River. The Hoosiers, coming off two consecutive 11th place finishes at the NCAA Championship, returned the core of their roster this season, presenting a major challenge for the Hawkeyes.

The first day of scrimmaging was staged over 4,000 meters. The top two varsity eight crews from each program raced in a time trial, or head race, format typical of fall rowing competition. The Hawkeyes held their own, topping Indiana in each 4,000-meter piece.

The second day of racing offered an unusual opportunity for spectators with the two programs staging five 1,000-meter match races on the UI campus. With three scrimmage sets starting at the Iowa Memorial Union Footbridge and the other two finishing there, fans lined the IMU Footbridge and the Hancher Footbridge at the midway point to cheer on the Hawkeyes.

The varsity eights traded wins with the Hoosiers, while the Hawkeye 4+’s dominated the day, winning all five races in the 1V4+ and 2V4+ divisions.

“That gave them a great springboard,” Carter said. “Everyone on our team knows what it means to be 11th in the country so, to race Indiana that well does a lot for the confidence of our group. The eights traded punches with a couple of powerful crews and that speaks to improving speed at our top end. The fours showed their class and that was great evidence of our improving depth. Both of those things are going to be needed to compete in this league come spring.”

The positives gained in the scrimmages with Indiana prepared Iowa for its fall finale weekend, which provided the biggest challenge yet.

The team’s top varsity eight and four crews headed east to the Head of the Charles Regatta for the first time since 2007. Iowa met the challenge head-on with impressive results.

The varsity four placed sixth overall and third among collegiate crews behind Virginia and Brown, teams that placed first and third in the event at the NCAA Championship in 2015. Iowa’s varsity eight placed ninth in a field of 32, which also included top NCAA programs from all the elite conferences. Both finishes are the best ever recorded by Hawkeye crews in the history of the 51-year-old event.

Iowa also sent crews to the Jayhawk Jamboree, jumping up a level to fill the roster spots left open by the student-athletes rowing in Boston.

In the varsity eight event, the Hawkeyes faced top crews from Kansas, Kansas State, and Tulsa, and earned an impressive third place finish. In the varsity four, Iowa’s top crew was the runner-up. Similar to the Des Moines Regatta, the novice eight capped the day with a solid win in their event.

“The return to the Head of the Charles and the results that came out of that was a major highlight,” Carter said. “To have Iowa represented there after a seven-year absence was a highlight in itself for our program. Seeing our women doing so in a first-class fashion was even more so. The results in Boston were a terrific final measure for those crews. Along with their teammates, who raced in Kansas, they put in their best fall yet and showed some of their best racing in the past two years. Their best racing is what they’ll need to use in the spring so we’re off on the right foot.

“The results in Kansas were encouraging and further evidence that our depth is in good shape. We’re in a good place as a team and I expect that it will be even better when we had to the start line in April.”

The Hawkeyes look to carry on the success from the fall and continue to build their resume throughout the regular season this spring.

Following a pair of scrimmages against Old Dominion on Feb. 18 and Texas on Feb. 21, Iowa is set to open the regular season against Louisville and Notre Dame in Big Ten/ACC Double Dual action on April 2 in Louisville.