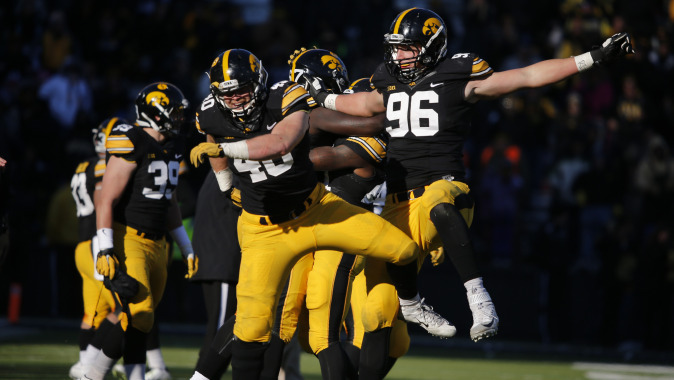 IOWA CITY, Iowa — University of Iowa defensive end Parker Hesse has been named Big Ten Conference Freshman of the Week for his performance in Iowa’s 28-20 win at Nebraska.

Hesse equaled his career best with six tackles in the win at Nebraska. With the scored tied in the second period, Hesse tipped a Cornhusker pass in the air, grabbed the deflection for his first career interception and ran four yards to the end zone for his first career touchdown.

Hesse played in all 12 regular season games, with seven starts after taking over for injured senior Drew Ott. He has recorded 19 solo tackles and 19 assists, including three tackles for loss and two sacks. He also has one pass break-up, one caused fumble and one fumble recovery.

Iowa shares the Big Ten lead and ranks fourth nationally with Michigan State with a plus-14 turnover margin. Iowa has scored 83 points off turnovers and leads the Big Ten with 17 interceptions. The Hawkeyes have returned four interceptions for touchdowns.

Iowa (12-0, 8-0) has established a school record for wins in a season and will meet Michigan State in the Big Ten Conference Championship game Saturday at Lucas Oil Stadium in Indianapolis (7:17 p.m. CT, FOX).