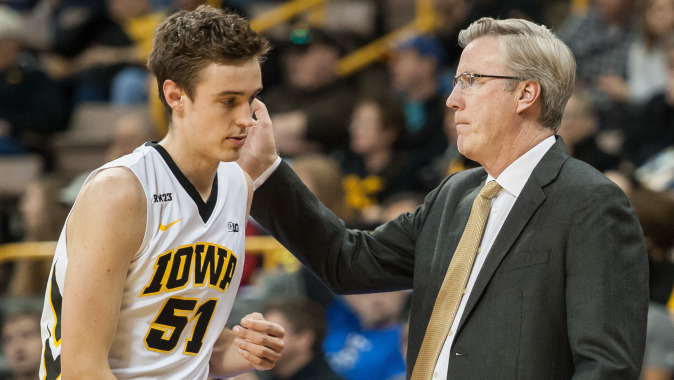 COACH MCCAFFERY: I’m going to start with an opening statement, which I don’t normally do. I’m just going to address Dale Jones’s situation. He’s going to need surgery on that knee. I don’t know exactly when that’s going to be. It will be some time in the next couple weeks. It’s still swollen a little bit. So we’ll let that settle down and then we’ll do surgery and we’ll get him back next year. I’m very disappointed for him, because I love that kid and he was really coming and he could really be a major factor on this team — especially off the bench. His spirits are good, and we’ll just pray for a successful surgery for him.

Q. Was that right or left?
COACH MCCAFFERY: Same one as before. I think it’s his right. I don’t know for sure. You can ask him.

Q. Dom Uhl had a great game…
COACH MCCAFFERY: You know what’s great about it? He didn’t start great. If you think about it, he fumbled it. I was getting ready to yank him, because I just thought he wasn’t quite ready. But he did fly at the glass. His success wasn’t great, but his energy level was worth me leaving him in the game. I left him in the game and then he was spectacular, double double, 14, 10, three assists. Just so proud of him and we need it.

Q. Your bench guys kind of gave you that spark. You got on the guys for that lull there in the second half, and the bench guys lifted you back up…
COACH MCCAFFERY: I got on them in the first half too, by the way. I felt we got a lead, it was a decent lead, but it wasn’t a comfortable lead and I thought we were content to trade, in both halves. That’s where we need to be more intense and get consecutive stops.

We got 53 points off the bench. That’s a lot of points. I’m really proud of those guys. I thought in that one stretch, like you said, right after I got on them at that timeout, we got consecutive stops. Then the lead got to 25 or whatever and we felt like, okay, we got it.

Q. Wagner seems like a kid, I know he’s just a freshman, but when he goes in there it seems like he belongs. It seems like he’s a kid who as the season goes on, you’re going to get more out of him?
COACH MCCAFFERY: He’s a phenomenal athlete, but he’s really a cerebral guy. He understands what we need done. He processes the scouting report, he knows what we’re doing on offense, he knows what we’re doing on defense, he knows who he’s guarding, and he never tries to get out of what he does well. He makes a play when the play is there. If the play is not there, he moves it on and has a real keen idea of what’s needed from him and what our team needs.

Q. With what you were hoping to get out of Dale this year, who is the guy you’re going to look to on the bench to fill Dale’s role?
COACH MCCAFFERY: It would be Dom, Ahmad, and Nicholas. Those three guys.

Q. Micholas Baer… He’s knocking down threes from all over the floor. It seems like he’s really coming on for you?
COACH MCCAFFERY: He’s been fabulous. A lot of times you look at this, his stats, and his defense doesn’t show up. He made some great defensive plays today against a long, athletic team. I just couldn’t be happier for him the way he’s playing.

Q. Any plans to watch TV tonight?
COACH MCCAFFERY: I really wish that I could just relax and sit down and watch that whole game. I’ll watch part of it. We’re going to be in the office. We play Monday night. We’ll have a meeting with the team tonight to address Western Illinois.

At some point I’ll watch part of it. If we didn’t play Monday night, I would be going home and we would be watching the whole thing. But with a short prep, I got to get cranking. I got a lot of film to watch tonight, tomorrow and then we play Monday.

We are pulling so hard for this team. It’s been so much fun to watch, so excited for Coach Ferentz and his staff, our players, our state, our university, and we’ll be pulling hard. It will be on in the office, and I’ll watch part of it.

Q. With that short turn around, how do you balance game prep with wanting to fix some things and that?
COACH MCCAFFERY: We will do a little of both. We’ll break this down and we’ll show some clips. There was some problem areas today, but I think if you were to look at positives and negatives there were way more positives, clearly. We scored 95. Yeah, we gave up 75. That’s a talented team. I really have a lot of respect for this program and what they have done so far this year.

The way our bench played, the way our starters played, at times, got us a lead, got us another lead in the second half. Most importantly, you’re playing against a team that likes to press, 2-2-1, we have six turns, we have 22 assists, we out-rebound them. We know those are the areas that you look at. If you’re turning it over, and you’re getting beat on the glass, you’re having a hard time winning.

Did a pretty good job on Boyd and Harrison, they got 28. That number could be less, but it’s one of those things, if you look at that and say, okay, those two guys are getting 40, that’s a different game. You have a hard time beating that team. Those two guys are special, and they got really good play from Austin and a few guys that can be good for them moving forward.

Q. We asked you about shot selection on Monday. Is your team assertive enough right now, overall?
COACH MCCAFFERY: Yes. I like the way we share the ball. I always would say I wish Jarrod would be more assertive. You look at him and say we had 13-7 with five blocks in 21 minutes. Fabulous game.

You always kind of look at him and say well, he could have shot it more. He’s just an unselfish guy. You got to love that about him. He did get it inside a little bit today and that was important for us.

Q. Do you worry about your team overlooking the next game?
COACH MCCAFFERY: Not at all. We don’t ever worry about that kind of stuff. This team beat Wisconsin at Wisconsin, so clearly they’ll have our full attention. We won’t even talk about Iowa State until after that game. Thank you.