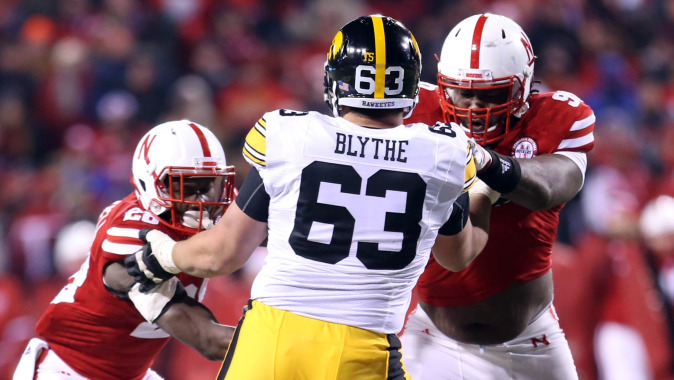 Blythe (6-foot-3, 290-pounds) has started all 13 games in 2015. He has started 44 straight games over the past three years and has 48 career starts. He earned second team All-Big Ten honors this season and has been a game captain for all 13 games. Bruce Nelson is Iowa’s most recent Rimington Award finalist (2002).

Blythe has played a key role for the Hawkeye offense in 2015. Iowa won a school-record 12 games with an undefeated regular season (12-0), before dropping a 16-13 contest to Michigan State in the Big Ten championship game. The Hawkeyes have been invited to meet Stanford in the 2016 Rose Bowl (Jan. 1, 4:10 p.m. CT, ESPN).

The Hawkeye offense is averaging 32.1 points per game, 192 rushing yards and 201.8 passing yards per game. Iowa scored over 30 points in five straight Big Ten games for the first time ever and the Hawkeyes rank among the national leaders in time of possession.

Blythe is a native of Williamsburg, Iowa. He has been named to Iowa’s Leadership Group for four straight years. The additional finalists for the award are Jack Allen of Michigan State and Ryan Kelly of Alabama.

The Rimington Trophy is presented annually to the Most Outstanding Center in NCAA Division I-A College Football. Since its inception, the Rimington Trophy has raised over $2.6 million for the cystic fibrosis community. The 14-year-old award is overseen by the Boomer Esiason Foundation, which is committed to finding a cure for cystic fibrosis and has raised over $115 million for CF Research.

Dave Rimington, the award’s namesake, was a consensus first team All-America center at the University of Nebraska in 1981 and 1982. The Rimington Trophy winner will be announced Jan. 16 in Lincoln, Nebraska. For more on the Rimington Trophy and a list of past recipients, visit rimingtontrophy.com.