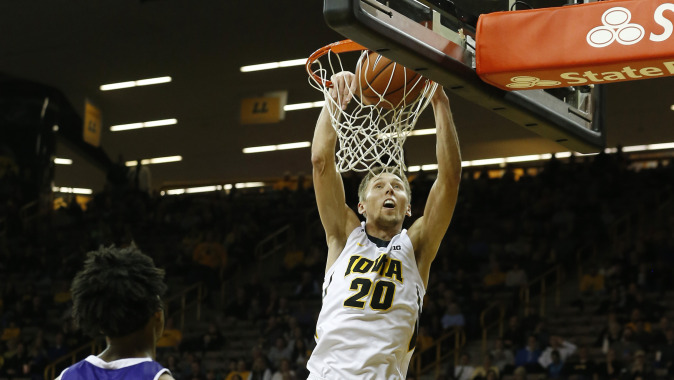 COACH McCAFFERY: Okay, guys, as you know, I don’t usually make opening statements. I’m going to make an exception tonight. I’ve been doing this a while. This guy right here is a pro’s pro. It’s been a great five plus years working with you, Rick.

You know, the media often gets the wrong label. When we’re dealing with you, it’s about the kids, and it’s about honesty. As a coach, that’s all you can ever ask for. I appreciate it. We’re going to miss you.

I want to thank you for the time we’ve had together, but I think everybody that’s ever sat in this chair feels the same way, as does Coach Ferentz.

So we have some gifts for you, as well. We have a signed ball and some other stuff. Thank you.

Q. Jarrod, 27 points, 24 in the first half, two different sequences. Seemed to be on fire.
COACH McCAFFERY: I think the thing that was really impressive about him today was he did it in and out. I think that’s what we need from him. He’s got to establish a low post presence, a perimeter presence. He’s always been a defensive presence.

Had eight rebounds in the first half. Didn’t play him much in the second half. Just a phenomenal performance by him.

Q. What did you think of Dom’s play?
COACH McCAFFERY: He’s playing with a lot of confidence right now. He’s playing with great athletic ability and his length. I think you’re just looking at a guy who really understands it now.

Last year, he was still figuring it out. Played him at two different positions. He struggled with that a little bit admittedly.

It’s just great to see him playing that way.

Q. You were talking a couple weeks ago how you wanted Jarrod to take more shots.
COACH McCAFFERY: I kind of wanted to leave him out there, let him take 25 shots. But once we got on a little run, got it to 25, I wasn’t going to do that. I was going to take him out.

We’ve had Saturday, Monday games,short prep after a war against Florida State, and a trip to Florida. We got some tough games coming up here.

Q. Did this surprise you, given they went to Wisconsin and won?
COACH McCAFFERY: I mean, this team, they’re 6-1. The Wisconsin win, if you watched the game, which I did twice, you know how hard it is to win there.

They executed. They battled. The thing that impressed me was they were up eight with five to go. Wisconsin got it back to even, and they won it anyway.

Covington, Fuller, Sandifer, those guys were tremendous. Their bigs were solid. We did a really good job. When you look at, in particular, Sandifer and Fuller, 6 for 25. There was a game this year where they had 29 and 26. Defensively we locked into those two guys which impacted how the game progressed, obviously.

Did a good job on the bigs. Didn’t really get hurt there. We had a couple defensive breakdowns on ball screen action. Other than that, we were really consistent defensively. We out-rebounded them by 10. So very pleased.

Q. Woodbury, we’ve seen him over the years, always a tough defender. You’re up 25 points. He’s scrapping for rebounds.
COACH McCAFFERY: Two plays, a steal and a dunk. He dives on the floor, calls timeout. That’s who he is. That’s what we need from him. He’s obviously a tough guy, but he’s also a smart guy. That’s a good combination.

Q. Before the game, Dale Jones was out shooting. He is still having surgery, right?
COACH McCAFFERY: Yes. Should be later on this month. We look at it like around the 18th of December.

Q. Is it something where he can look for a sixth year of eligibility?
COACH McCAFFERY: Yeah, there’s precedent for it. We’ll see where it is. Certainly would be eligible for that.

Q. When a guy (Uthoff) makes three threes in 80 seconds, last one was pretty deep, that’s a skill you can’t coach, right?
COACH McCAFFERY: Well, you know, it changes the whole complexion of the game. We already had a lead. Then all of a sudden he does that. Because if you remember, they hit a couple shots right around there, as well. Just kind of nullified any run they were going to make.

That’s obviously what you want your best player to do.

Q. Guys did a good job of sharing the ball. I know when your starters were in, it was about two assists every third basket or so.
COACH McCAFFERY: I thought we made great decisions. Mike had a couple goofy plays. He got caught between go, don’t go, throw it, don’t throw it. Other than that, we made good decisions when to push it, when to grind it, and when to throw it in.

We were hitting threes early, so it tends to stretch the defense. I mean, they were really worried about our three-point shooting. They were running to the corners which gave us driving space in the first half. Remember, we were in the bonus, I think it was the 12-minute mark in the first half, and that’s another game changer, because every time you drive from that point forward you’re going to get to the line. We missed a couple, but we made a couple.

Q. Brandon (Hutton) hurt or have you decided to redshirt him?
COACH McCAFFERY: We’re not going to play him this year.

Q. Gets more difficult Thursday night.
COACH McCAFFERY: Yeah, playing the fourth ranked team in the country with a lot of experience. Yeah, a lot tougher.