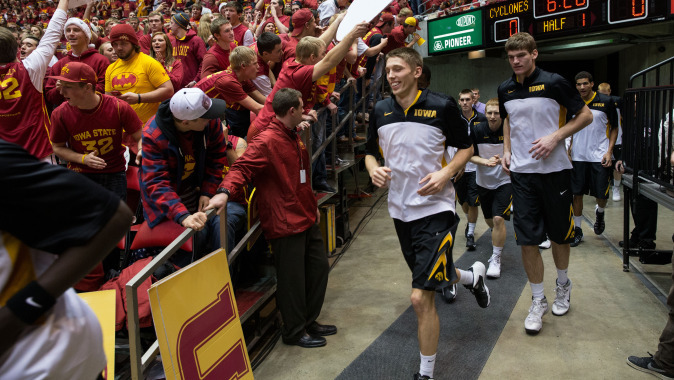 IOWA CITY, Iowa — Add a little fuel to the fire to the 2015 edition of the Iowa Corn Cy-Hawk Series matchup on the hardwood.

The University of Iowa men’s basketball team heads to Hilton Coliseum for a Thursday matchup against No. 2/4 Iowa State. The Cyclones have won the last two meetings in the series, including a 90-75 victory last season in Carver-Hawkeye Arena.

“We’re motivated,” said senior Mike Gesell. “Last year’s meeting fuels us a bit. We had a bad taste in our mouths after that game. We felt we didn’t play very well and anytime you lose big like that to an in-state rival, it’s not fun. This year will be another great matchup.”

Iowa heads to Ames battle-tested. The Hawkeyes went on the road to Marquette on Nov. 19 in a Gavitt Games contest, posting an 89-61 victory. The team then went on the road for a three game in four days stretch over Thanksgiving break, competing against three teams that could be playing in March in Dayton, Notre Dame, and Wichita State.

“The early season tests have prepared us a lot,” said Gesell. “They have helped us get ready to play in different scenarios, getting ready to expect the unexpected, and for this game.

“Iowa State is a top-five team in the country. It’s a tough road environment, but the seniors have played a ton of games on the road and we’ve proven we can win on the road.”

Two years ago, Iowa was on the verge of winning in Hilton for the first time since 2003 — a 54-53 victory in a National Invitation Tournament — but Iowa State rallied in the final minute to defeat the Hawkeyes, 85-82.

“It was a good game (in Ames in 2014),” said senior Jarrod Uthoff. “We were up five with a minute to go and lost. We’re looking to get a little redemption.”

That loss came during Gesell, Uthoff, Adam Woodbury, and Anthony Clemmons’ first trip to Hilton Coliseum. That was 62 games ago.

“We have a lot of experience, playing in that gym and playing in hostile environments and tough road arenas,” said Gesell. “We know what it’s going to be like and what to expect. It’s nothing that is going to catch us by surprise.

“We have to go out there and execute the game plan that the coaches put together.”

The Hawkeyes have done that more often than not. Iowa has won eight of its last 11 true road games dating back to last season.

“We play in a lot of loud environments… Michigan State… Indiana… Iowa State is no different,” said Woodbury. “They have a lot of fan support there. It will be a little bit different, but nothing we haven’t faced before.”

Playing in front of that sold-out anti-Hawkeye crowd of 14,384 is something Gesell looks forward to.

“That place was so loud, it’s so much fun,” he said. “That’s why you sign up to play college basketball, to play in environments like that. It’s a great opportunity for us and it’s another chance to boost our (NCAA Tournament) resume. It’s going to be a fun matchup.”

Thursday’s game is set to tipoff at 6:31 p.m. (CT), and it will be televised on ESPN2 with Mark Neely and Fran Fraschilla on the call.