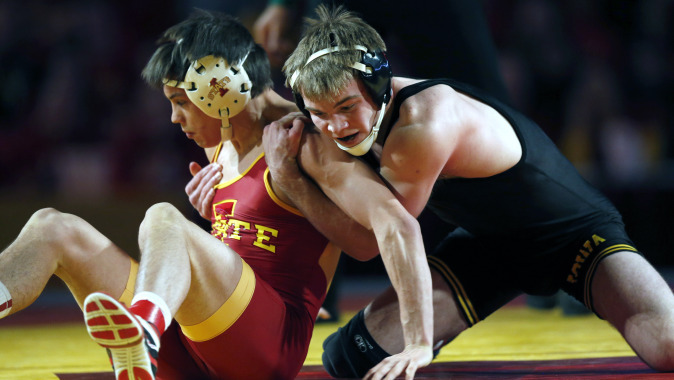 Editor’s Note: University of Iowa sophomore Brandon Sorensen took a 2-1 lead over Northwestern’s Jason Tsirtsis with a second-period takedown Sunday. In the process, Tsirtsis sustained an injury and defaulted the match to Sorensen.

EVANSTON, Ill. — A matchup between two of the best 149-pound wrestlers in the country highlights the Iowa-Northwestern wrestling dual Sunday in Welsh-Ryan Arena.

For the fifth time in their college careers, University of Iowa sophomore Brandon Sorensen (ranked first or second nationally) will face Northwestern junior Jason Tsirtsis (ranked third or fourth). Sorensen scored a takedown in overtime to defeat Tsirtsis, 3-1, in the 2015 Midlands Championships final Dec. 30 and even their head-to-head record at 2-2. He was named Big Ten Conference co-Wrestler of the Week on Jan. 5.

The winning takedown was the first for Sorensen against Tsirtsis. Sorensen won their initial meeting, 3-2, in overtime Jan. 23 in a conference dual at Carver-Hawkeye Arena. Tsirtsis won his second straight Big Ten Conference title by defeating Sorensen, 2-1, on March 8 in Columbus, Ohio, and made it two in a row by edging Sorensen, 3-1, on March 21 in the third-place match at the NCAA Championships in St. Louis.

A total of 16 points have been scored by both competitors in the first four meetings.

“The bottom line is (Sorensen) flipped the switch by taking some real risk and committing,” UI head coach Tom Brands said. “Some time you have to let it fly and that’s what he did — two hands went to the leg, he brought his hips with him, and all the sudden you’re in deep. That can happen more and it can happen in a variety of ways.”

Sorensen improved to 55-6 in his career after defeating Illinois sophomore Kyle Langenderfer by major decision, 16-4, on Friday in Champaign, Illinois. He is 15-0 and ranked No. 1 at 149 according to WIN Magazine and Amateur Wrestling News. Intermat ranks Penn State sophomore Zain Retherford one spot ahead of Sorensen.

Six of the top 10 competitors at 149 are from the Big Ten Conference. Tsirtsis is a two-time conference champion; he won an NCAA title in 2014 and was third in 2015. Sorensen was runner-up at Big Tens last season and finished fourth at NCAA.

“I know I can take him down, so let’s do it earlier and let’s not go to overtime,” Sorensen said. “It helps with confidence. I always knew I could take him down, I just have to keep going to it and get the score.”

Brands agrees. Instead of wins by one or two points, the head coach is looking for more explosiveness that could lead to a wider margin of victory.

“Does he want this to go down to a flip of a coin or is he going to make something happen?” said Brands. “(At Midlands) it was kaboom. Now we have to get kaboom, kaboom, kaboom, kaboom. That doesn’t mean every kaboom is going to equal points, but the more kabooms you can put in there, the more you will have a chance to score.”

“(Tsirtsis) comes from wrestling stock and they are telling him the same things (we are telling Sorensen),” Brands said. “That is why this matchup is interesting: You have two really good guys who are both stingy.”