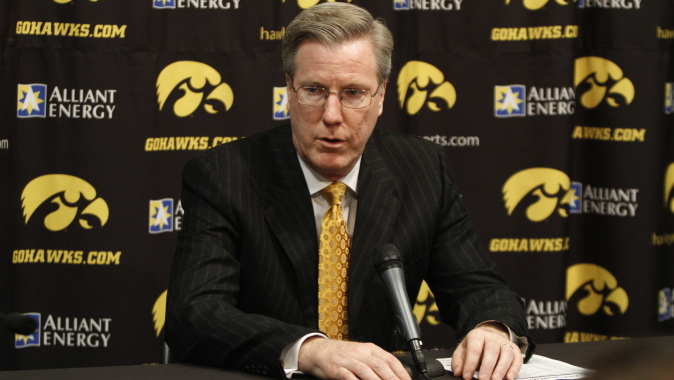 Q. You’ve played Michigan State quite a few times over the years, before his injury, Valentine was as good as any player than America; now that he’s back, what do you see of him and how difficult of a guy is he to contain?
COACH McCAFFERY: He’s incredibly unique because he can take a game over; he plays multiple positions; he can bring it down; he can post up; he can play on the wing. If the game is fast, he can play if it’s in halfcourt.

When it’s all said and done, he’s one of the leading scorers in our league but he may impact the game more with his passing than anything else. He loads everybody up and makes everybody else better. The impact that he has on the game and their ability to score is dramatically different.

But I’m not worried about him that way, at all.

Q. Where is Clemmons health-wise? Is he back?
COACH McCAFFERY: He’s fine.

Q. How long has he been practicing?
COACH McCAFFERY: A couple days. I mean, yesterday was his first full day, but he’s participated in part of the practices before. He’s worked out on his own. Sunday was an off-day and he was in the gym on his own. That’s when he knew he was ready.

Q. This break came at the perfect time for him?
COACH McCAFFERY: Exactly. I don’t think anybody likes breaks this long, but if you have a guy who is injured, you know, it certainly benefits him. And we’re thrilled about that because obviously he’s a very important part of what we do.

Q. What’s been your message and what have you seen from the players in what’s been a really long break?
COACH McCAFFERY: You work on different things. It gives you time. You can work on your offense, your defense, your pressing, your zones, your zone attack, your man attack, whatever you might see, not necessarily locking into the next opponent until you get to yesterday. So for the first part of this break, it was, how do we get better, and then yesterday we began focusing on Michigan State.

Q. Is there a concern, you guys are really kind of on a roll, when this break came along.
COACH McCAFFERY: I don’t get concerned either way. If we were playing well; if we were playing poorly, everybody gets a break. This one seems a little longer than usual. Usually you play Saturday, you miss your Tuesday or Wednesday game, and then you play the following Saturday. It’s usually seven days; it was nine because it was a Tuesday, Thursday. But everybody gets a bye.

Q. Sometimes teams have kind of a mental block of things happening against another team and kind of snowballs. You beat Michigan State in the first game, lost a lot of really tough games and then you won a couple weeks ago. How has that affected you guys confidence-wise?
COACH McCAFFERY: It doesn’t affect anybody confidence-wise who wasn’t here, you know, when those other games took place. Now, obviously you’re talking about Anthony Clemmons, Mike Gessell, those guys have been participants in some of those games. The other guys, doesn’t mean anything to them. They weren’t here.

I don’t really look at that. The bottom line is: You go on the road, you play one of the best teams in the country, you have to execute. You have to defend. You have to rebound. You can’t turn it over. You’ve got to limit their key personnel, under their averages. You can’t make poor decisions with shot selection, where you’re driving the ball on the break and halfcourt, because that leads to open threes and transition baskets and it gets us in foul trouble. I mean, all of that fits, and that’s what we focus on.

Q. What do you think is the reason, no matter where Michigan State is in January and March, they are as dangerous as anybody?
COACH McCAFFERY: Well, you look at their roster — again, I can’t speak to what happened before I got in this league. But you have Draymond Green and Kalin Lucas, Denzel Valentine, and you just keep going, the players that they have had, if they are going to be in the hunt, they have got one of the best coaches in college basketball in the last 50 years.

So they are going to be in the hunt. I think Tom has done a particularly good job, if they stumble at all, like last year, they lost to Texas Southern at home. And if you look at from that game forward, they were pretty resilient, very effective, executed with incredible precision, and were playing as well as anybody in the country late, obviously they went to the Final Four.

But a lot of times, you get into the tournament, one thing that also helps them is that they have had tournament experience. So when you have players that come before you that sort of expect to make the tournament, expect to win when they get there, it’s an attitude that I think permeates that program. They have an uncanny ability to win close games.

Q. They have a couple good posts in Costello and Schilling; they made a concerted effort to go inside and it seems to have paid off. What are the challenges there?
COACH McCAFFERY: I think sometimes, especially in light of the fact that it wasn’t a major injury. I would hate to see that for Denzel. He was out for a couple weeks. And I think it made them a better team.

Costello is a different player. Harris is a different player. Schilling was actually just coming off an injury and I think everybody knew he would be a quality front-line player, and then you’re seeing that now. But Davis is phenomenal. They have got a lot of different weapons, but sometimes you take a key guy out, it forces others to step up a little bit, which they have done and now Valentine comes back and I think they are a much better team as a result.

Q. Talk about the environment, how difficult it is.
COACH McCAFFERY: It is. It’s intense. It’s sold out every time you play there. It’s not unlike some of the other venues in our league. But it’s going to be loud. You’ve got to execute.

Q. What is your approach when you’re red-shirting guys? How much work are they getting?
COACH McCAFFERY: Well, now what they are on is a scout team, so they will be simulating other players, which I think is good for them, because you’re typically — you’re a Valentine one day; you’re Yogi the next day; Harris, whoever.

So you’re aggressive; you’re of the aggressive mind-set offensively, trying to go get buckets. And then obviously defensively, as well. So I think that — I think it helped Baer a lot last year. You look at Baer last year, being that guy last year for us really helped him. I think it will help these two guys, as well.

Q. What have you seen, are they real upbeat?
COACH McCAFFERY: It’s not easy when you’re not playing, but those two guys are phenomenal people. They want to help us be the best possible team we can be and that’s the only way they can do it now. They are getting in extra work. If you can get here before our games, they are lifting and shooting, two, two and a half hours of work in before we play. Both of them, Isaiah more than Brandon, got to change his body a little bit. But they are coming.

Q. Mike was named Big Ten Player of the Week, and he’s always had good moments in the past but he seems to be just so consistent this year. Is there a reason for that other than the fact that he’s now a senior?
COACH McCAFFERY: I don’t think so. I would just say that he’s a guy that just continues to get better. He had the opportunity and he played right away when he was a freshman. He played sophomore and junior year. He had great games. I always thought he was one of the better point guards in our league, and now he’s a senior.

So obviously his knowledge is helping him, but we still have 15 more and we want to see that continue. There will be nobody that’s better prepared than he is.

Q. This stretch on the road, games coming up, is there something beneficial in the routine coming up?
COACH McCAFFERY: I think once you get into the routine that everybody is in, you play every couple days, I think that’s what we all prefer. Sometimes you get to a point where you say, boy, we can really use an extra day or two. But I mean, everybody is in that boat.

Q. What did you think of Michigan State Sunday? Do you sit and watch the games live?
COACH McCAFFERY: I do not. I would much rather do it like where you can run it back; run that back, I want to see that again. Fast forward through the TV stuff and just focus on the game and on the plays.

I think Penn State’s pretty good, and it was at Penn State where we’re usually very good . And they really got into them. They pushed it. They rebounded. It was like they had everybody back and really didn’t give Penn State a chance that day.