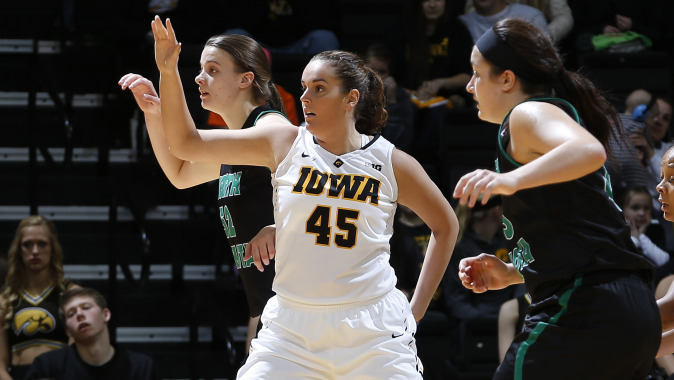 THE MATCHUP
The University of Iowa women’s basketball team tips off against Penn State at 7 p.m. (CT) inside Carver-Hawkeye Arena Wednesday.

PROMOTIONS
? It is Nicole Smith bobble head night inside Carver-Hawkeye Arena Wednesday.
? It is also UI Student Night. Students in attendance get free food prior to the game and can register for a chance to win a $100 Visa gift card.
? Wednesday is Four Pack Night. Fans who order the package prior to game day get four tickets, four hot dogs, and four drinks for just $35.
? It is also Camper Reunion Night.

GAME COVERAGE
? Fans can watch the game live online on BTN Plus available at btn2go.com.
? Live audio of the game can be heard on select Hawkeye Radio Network affiliate stations and on Hawkeye All-Access available at hawkeyesports.com. Brent Balbinot and Kathryn Reynolds will call the action.
? Balbinot is in his 12th year as Iowa’s play-by-play voice.
? Reynolds, a member of the infamous Core Four and team captain for the Hawkeyes in 2014-15, is pursuing a law degree at the University of Iowa.
? Links to video, audio, and live stats are available on the women’s basketball schedule page at hawkeyesports.com.

A LOOK AT THE NITTANY LIONS
? Penn State is 6-11 overall and 1-5 in Big Ten play (tied for 13th with Illinois) heading in to the Wednesday matchup.
? The Nittany Lions opened conference action with an upset win over Northwestern, 79-72, but have dropped their last five contests at Minnesota, 98-85, against Michigan State, 71-55, at Wisconsin, 82-62, against Nebraska, 83-78, and against Michigan, 91-87.
? As a team, Penn State averages 71.7 points and 37.9 rebounds per game. Three average double figures, including Teniya Page (15.6), Brianna Banks (13.9), and Lindsey Spann (12.6).
? In conference games alone, Page is averaging 19.2 points per game.
? The roster, comprised of three seniors, four juniors, and six freshmen, is led by ninth-year head coach Coquese Washington.

B1G RETURN FOR MISS MICHIGAN BASKETBALL
? Freshman Tania Davis, Miss Michigan Basketball in 2014-15, made a statement in her return to the Breslin Center in East Lansing, Michigan, where she won state titles with Goodrich High School in 2012 and 2013.
? Davis led the Hawkeyes with a career-high 16 points and a career-high matching five assists at Michigan State. She matched another career-high with six rebounds in the contest.
? In the first half, Davis was 3-for-3, sinking all three of her three-point field goal attempts.
? The Grand Blanc, Michigan, native closed the game with a .417 field goal percentage (5-12) and an .800 three-point field goal percentage (4-5).

COMING ON STRONG
? Sophomore point guard Whitney Jennings has hit her stride, improving significantly in conference play.
? In four of six league games, Jennings has scored in double figures (10 vs. Rutgers; 10 vs. Maryland; 11 at Wisconsin; 15 at Michigan State).
? The Logansport, Indiana, native is leading the team with 20 assists and owns a .383 field goal percentage and a .350 three-point field goal percentage in conference contests. She averages 10.0 points per game in conference games.
? In all 18 games, she averages 8.6 points per game and is shooting .327 from field goal range and .327 from beyond the arc.

CALL ON ME
? Junior Ally Disterhoft, a preseason All-Big Ten selection by league coaches, has been a consistent force for the Hawkeyes all season.
? The 6-0 forward paces Iowa in points (16.6) and rebounds (5.6) per game. She is also second in assists, averaging 3.0 per contest.
? She has scored double figures in every game of the season and in 63 of 69 career starts.
? The Iowa City, Iowa, native has led Iowa in scoring in nine of 18 games this season, scoring 20 points or more in four contests.
? Disterhoft owns a .544 field goal percentage, .380 three-point field goal percentage, and .758 free throw percentage.
? She currently ranks 20th on Iowa’s all-time scoring list with 1,275 career points and 22nd all-time with 530 career rebounds. Disterhoft is the 34th player in program history to surpass the 1,000 career point threshold.

MOVING UP THE CHARTS
? Junior Ally Disterhoft is 20tt on Iowa’s all-time scoring list with 1,275 career points and is also 21st all-time with 530 career rebounds.
? She has played in every game of her Hawkeye career with 69 consecutive starts.
? Disterhoft has scored in double figures in every game this season, and in 63 of her 69 career starts.
? The co-captain leads Iowa in points (16.6) and rebounds per game (5.6).
? Freshman Megan Gustafson has compiled 29 blocks through 18 games played this season, which is fourth on the all-time freshman list at Iowa. The record at Iowa in a freshman season is 79 blocks, set by Morgan Johnson in 2009-10.

UP NEXT
Iowa is back on the road to face Purdue on Sunday, Jan. 24. Tipoff is set for 2 p.m. (CT) in West Lafayette, Indiana. The game will air live on the Big Ten Network.