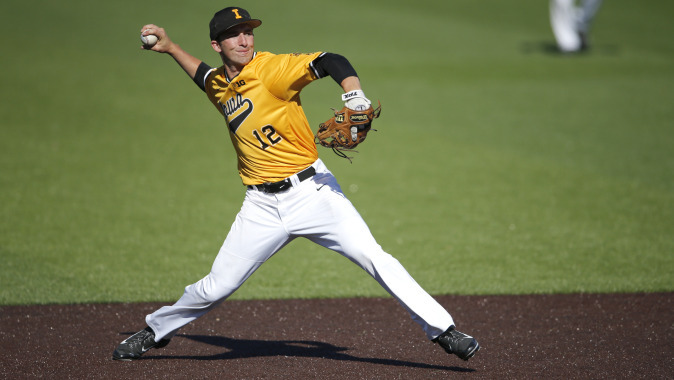 McCoy’s summer began with a 10-day contract with the La Crosse Loggers; it ended with McCoy being the Northwoods League and La Crosse Loggers’ Most Valuable Player. He finished the season with league records of 112 hits, 80 runs, and 168 total bases.

“It was surreal because I was only supposed to be there 10 days and then leave after the full-time guy got there,” said McCoy, a junior from Washington, Illinois. “When I got there, I wanted to prove myself. I was playing with kids from big schools — Texas A&M, Washington, UCLA. When I came up to bat, it said Illinois Central College, I was a little junior college kid.

“I felt I had to prove myself every time I got out there and I wanted to make a name for myself. I went out every day knowing someone could take my spot or I could go home the next day. That pushed me to do the best I could.”

McCoy finished the season with a .367 batting average, collecting 112 hits in 305 at-bats. In addition to his 80 runs and 168 total bases, he finished with 43 RBIs, 21 doubles, four triples, and nine home runs in a league-high 71 games. His 21 doubles were second-most in the NWL and the nine home runs ranked in the top seven.

“What Mason did last summer was amazing,” said UI head coach Rick Heller. “It speaks as much to his character as much as his baseball talent because the NWL is a long season. If you don’t have that professional approach to the game and go out and give quality effort every game, that doesn’t happen.

“That’s the thing that made me the proudest. It was impressive to see what he did with the bat, but it was just as impressive, if not more, the consistency he showed all summer.”

McCoy turned heads with his performance, so much so that he was offered four free-agent contracts from Major League Baseball organizations.

“I know that coming here was my best move,” said McCoy. “My goal was to play Division I baseball and I have that opportunity. It was my trust in the coaches that made the decision for me. I trust they are going to help me improve and do what is best for me and the team.”

McCoy has been a shortstop and No. 3 hitter throughout his career at Washington High School and Illinois Central College, where he was a two-time All-American. McCoy’s versatility makes him a swing candidate in the Hawkeye infield. Heller says McCoy will likely start out at second base.

“I am OK playing anywhere as long as I am going to help the team,” said McCoy. “We have (Nick) Roscetti back at shortstop, and he’s a good player and Corbin (Woods) at third. I know I can play anywhere and get it done.”

With the graduation of Eric Toole, Jake Mangler, and Kris Goodman from the top of Iowa’s batting order, Heller is looking for offensive production from McCoy.

“Whether he’s leading off or hitting two or three, we feel good about having Mason at the top of the lineup,” said Heller. “Any way it works out, he’s going to be one of our main guys.”

It’s McCoy’s confidence as a hitter and his ability to square the ball up that makes him an offensive weapon.

“He has great hand-eye coordination and knows where the barrel is,” said Heller. “He hits a lot of line drives to both sides of the field, and if you do that, you’re going to get a lot of hits. He has a good feel and that along with his drive, confidence, and work habits… that’s a good combination.”

McCoy is out to prove that his NWL success wasn’t an anomaly.

“A lot of people could get satisfied,” he said. “Now that I had that performance in the summer, I still have to prove to everybody that it wasn’t a fluke. Momentum-wise, I am playing some of the best baseball I ever have and I have already gotten better by coming here.”

The Hawkeyes open the 2016 season at Dallas Baptist from Feb. 19-21 in Dallas. Iowa’s home opener is March 8 or March 9 against Northwestern (Iowa) College at Duane Banks Field.