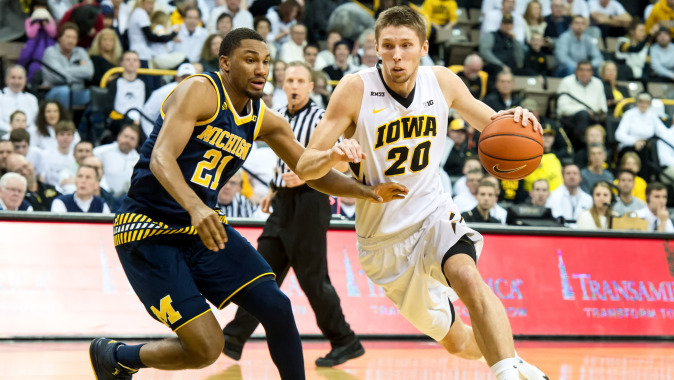 Uthoff is one of 20 players named to the prestigious list. The native of Cedar Rapids, Iowa, is also on the John Wooden Midseason Top 25 List and the Lute Olson Award Watch List.

Uthoff leads the Big Ten in scoring (18.9 ppg) and blocked shots (3.0 bpg). He is the only player from a Power 5 conference with 350-plus points, 115-plus rebounds, and 55-plus blocked shots. He is also the only player in the country to reach double figures and block at least one shot in every contest this season and is the only college player the last 20 years to average three blocks, while also shooting at a 40 percent clip from 3-point range (min. 35 3-pointers made).

The award will be presented at the College Basketball Awards gala in Oklahoma City on April 11, 2016, at the National Cowboy & Western Heritage Museum. Access Sports, a non-profit organization committed to supporting various charitable causes, will serve as host for the gala. Funds from the gala are used to support youth basketball programs in Oklahoma that allow disadvantaged youth the opportunity to participate in leagues and training.

The USBWA, comprised of nearly 1,000 sports journalists covering college basketball for newspapers, magazines, and websites, will select the recipients of the awards. This will be the first time the women’s college player of the year will be featured at the gala.