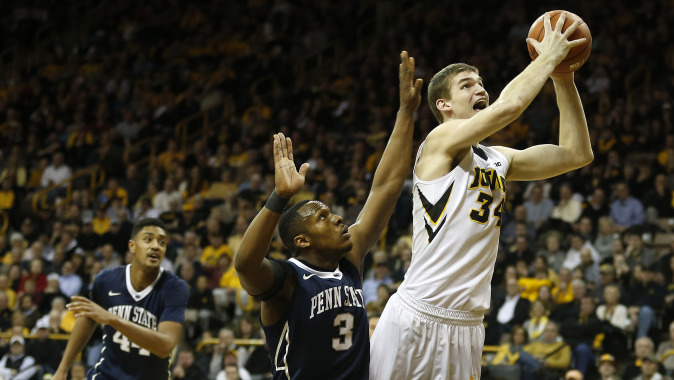 Q. What do you think of your perimeter defense tonight to hold them 1-for-20 shooting from three?
COACH McCAFFERY: Well, I thought right from the outset, our defense set the tone. We got stops. We got run-outs and kind of established how we want to play.

I mean, I’d like to think our defense was completely responsible for 1-for-20; they had a bad night. I mean, this team has better three-point shooters. Okay, they don’t have the greatest percentage, I know, it’s right around 30. But normally Garner’s going to make a couple; Banks will make a couple; Taylor will make a couple. So they just started taking everything to the basket.

Q. Woodbury, career-high 15 rebounds?
COACH McCAFFERY: Yeah, wanted to put him back in there, but I didn’t need him to get hurt there. He was spectacular, all night long because they were hard-earned traffic rebounds. That’s the thing about Penn State. They are coming after the ball when it comes off the rim, so you have to be able to get traffic rebounds and be strong with the ball, because even if you get it, they are going to come after it.

Q. How encouraging to get off to such a fast start?
COACH McCAFFERY: It was great. I thought we really were locked in to throwing it ahead and attacking in transition. You can do that, but you’ve got to do it. It’s much better to do it after stops. We were getting stops.

Q. Singling out a couple of guys, Woodbury and Clemmons, played over a hundred games — looks like they are clearly getting better. Is that how you see it?
COACH McCAFFERY: I think that’s a fair statement. They are young guys with great character and they put the time in. They study. They work in practice. They don’t take anything for granted. And there’s a lot to be said for going through it and getting experience in this league.

It’s tough to be a young guy in this league. We all know that. The fact that they are experienced; they play with a tremendous amount of confidence, and they are good players. So, you know, they are going to keep getting better.

Q. Ahmad Wagner, seems like almost every time he gets on the floor he just continues to get better and that dunk that he had.
COACH McCAFFERY: Especially at the time, we go to our bench and he makes a big-time play. He gets a big-time rebounds when we needed some second shots; we missed a few. But he’s just a guy that really understands how to play, knows what to do, and he’s a spectacular athlete and he impacts the game. He’s another guy, every game, he gets better.

Q. How do you work on next week’s schedule?
COACH McCAFFERY: Well, I’m looking at this week — unless you consider Sunday next week.

We are off tomorrow, so I’ll probably go recruiting, and then we’ll start getting ready for Illinois. Tough place to play. Really two of the better players not only in our league but the country I think, Hill and Nunn, so we have to be ready to play. Last couple times we have played them, they have been really good, really close, really hard-fought games, so we have to be ready for that one.

Q. The opposing coaches, saying how much respect they have for what you’ve done with this program. How does that make you feel?
COACH McCAFFERY: Makes you feel great, because obviously I know Chris really well. I know Pat really well, a lot of respect for those guys. So for them to say that, is greatly appreciated.

But I view it a little differently maybe, because it’s a reflection of what they think of our team, of our players. And I think as much as I can say it, it’s always about them more so than what we do. So I really appreciate Pat’s remarks.

Q. Do you feel Gessell’s injuries is holding his number s down?
COACH McCAFFERY: No, he’s fine.

Q. Why do you think his numbers?
COACH McCAFFERY: I don’t know. I mean, I thought he played a really good floor game tonight. Just having trouble getting it in.

Q. You talk about a short-term memory, moving on from previous games, but what’s impressed you about how this team has responded since that loss?
COACH McCAFFERY: It’s been businesslike. They were businesslike before the game, after the game. I just keep saying the same thing over and over. You know, I don’t expect anything different from them. They were like that last year, and they were like that the year before.