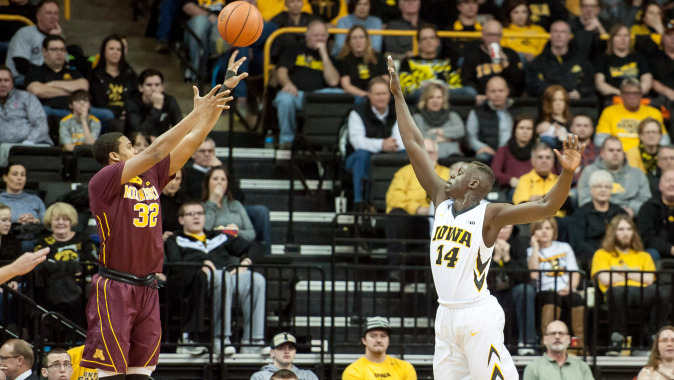 Q. Is this one of those games where you are just happy to get out with a win?
COACH McCAFFERY: I wouldn’t look at it that way, no. We just beat a Big Ten team. They’re athletic. They’re long. They compete. You got to look at the scores of recent games, they’re in every game.

Q. You went zone pretty much out of the chute.
COACH McCAFFERY: Went man right away, then we went zone, finished the half, started the second half zone, then we went man, then we finished with zone.

Q. What did you like about the matchup?
COACH McCAFFERY: They’re a driving team. They drive in man coverage, they drive in zone. They’re quick. Somebody gets you a chance to get your defense back, see everything, contain penetration as much as you can.

Q. Jarrod at the end of the first half seemed to be really important. Got him on the scoreboard. Seemed to be important for your team.
COACH McCAFFERY: But he always is. In that particular stretch, he was terrific. Hit the deep three. Had a couple baskets at the rim. I think that’s what you like about him, he was scoring in a variety of ways.

We posted him. He ripped. Got to the free-throw line. Really proud of him.

They hit enough threes to keep you honest. They’ve had games where they didn’t make six, but they made six tonight. They make nine, they probably win the game.

We were willing to live with that. Like I said, we had three consecutive stops under the four-minute mark when we really needed it.

Q. Mike had 12 assists, no turnovers. How big is that to have in a game?
COACH McCAFFERY: It was huge because we were running some sets, we were running some motion, we were pushing the ball in the break. It was his decision making that was spectacular. Had a little trouble with his jumper today. I thought in terms of being a floor leader, engineering victory, he was great.

Q. You got six from the bench tonight. Seemed like they had more energy.
COACH McCAFFERY: You look at the offensive rebounding in particular, Baer and Ahmad, when we really needed it. Those guys were all over the glass. They weren’t mistake guys. That’s what you need, rebound, energy, defend, don’t make mistakes, and the points will come.