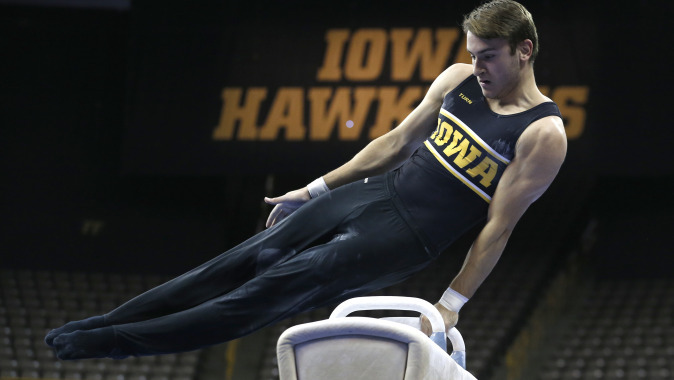 THIS WEEK:
The No. 7-ranked University of Iowa men’s gymnastics team returns to action to host No. 6 Nebraska and No. 8 Penn State on Saturday afternoon. The meet will be held inside the UI Field House at 1 p.m. (CT).

PROMOTIONS:
• UI students in attendance with a valid ID will receive a free slice of pizza as a part of Student Day.
• Season ticket holders can pick up their Iowa men’s gymnastics t-shirts prior to the meet.
• Junior Hawk Club members will receive free ice cream at the meet.
• Kids Zone will be available for young Hawkeye fans prior to the meet.
• Following the meet, men’s gymnastics student-athletes will sign autographs for fans.

Loochtan and Boyle both qualified for finals and competed in the all-around. Loochtan scored an 83.050 on bringing his combined score to 163.400 for 22nd overall. His best score came on floor (14.150), where he placed 13th. Boyle finished two spots behind Loochtan in finals with a score of 79.750. He posted his highest event score on parallel bars (13.350) to place 22nd, and finished the weekend with a combined score of 162.000.

SCOUTING THE COMPETITION:
The Hawkeyes face off against two top 10 teams this weekend inside the UI Field House.
• Penn State enters this weekend undefeated in conference action with a 3-0 record.
• Leroy Clarke, Jr. is ranked fifth in the country on parallel bar with a three-score average of 15.167 and a high score of 15.250.
• Randy Jepson is in his 24th year as head coach of the Nittany Lions.
• Nebraska comes into the weekend ranked one spot ahead of Iowa at No. 6.
• The Cornhusker’s Kyle King is ranked sixth nationally on floor with a three-score average of 15.433.
• The Hawkeyes went 2-0 against Nebraska in 2015.
• Chuck Chmelka is in his seventh season as head coach of Nebraska.

BIG TEN SHOWS POWER:
The Big Ten Conference has been dominant so far this season. Of the top 10 teams listed on roadtonationals. com, seven are from the Big Ten, including No. 3 Ohio State, No. 4 Minnesota, No. 5 Illinois, No. 6 Nebraska, No. 7 Iowa, No. 8 Penn State, and No. 10 Michigan.

Cory Paterson COMPETES IN CANADA:
During the Hawkeyes off-day on Feb. 6, junior Cory Paterson traveled to Halifax, Nova Scotia, with assistant coach Ben Ketelsen for the 2016 Elite Canada Artistic Gymnastics Championships. Paterson placed seventh in the all-around competition with a 79.100 and third on high bar with a 13.600 effort.

Botto, a Redwood City, California, native set new career bests on rings and vault last season. He scored a 15.050 on rings for second place in a win against Minnesota and Nebraska on Feb. 14 and set another career-high a month later with a 15.100 on vault, tying for first. Botto was also named an academic All-Big Ten honoree.