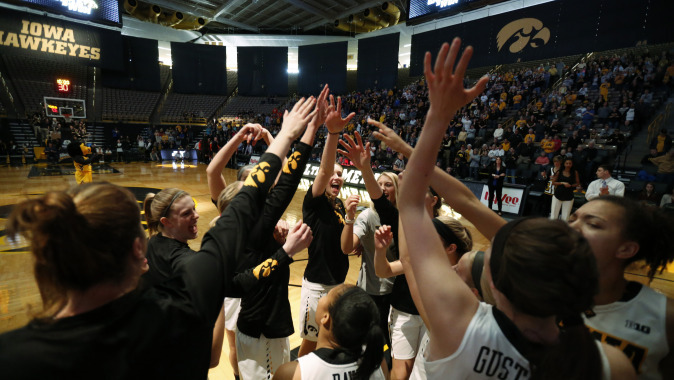 TOURNAMENT TIME
The University of Iowa women’s basketball team enters the 2016 Big Ten Tournament as the No. 9 seed after finishing the conference season with an 8-10 record. The Hawkeyes open tournament action Thursday at 11 a.m. (CT) against the No. 8 seed Michigan (9-9) inside Bankers Life Fieldhouse in Indianapolis.

GAME COVERAGE
? Thursday’s game will be broadcast live on the Big Ten Network. Lisa Byington (play-by-play), Christy Winters-Scott (color), and Shelley Till (sideline) are on the call.
? Audio of the contest is available on select Hawkeye Radio Network affiliate stations and on Hawkeye All-Access available at hawkeyesports.com. Brent Balbinot and Todd Werner will call the action.
? Balbinot is in his 12th year as Iowa’s play-by-play voice, while Werner is in his first providing analysis.
? Links to video, audio, and Gametracker (live stats) are available on the women’s basketball schedule page at hawkeyesports.com.

SCOUTING THE WOLVERINES
? Michigan compiled a 17-12 record overall and a 9-9 record in Big Ten play to finish eighth.
? Sophomore Katelynn Flaherty, a first team All-Big Ten selection by coaches and media, leads the team with 22.3 points per game, followed by Big Ten All-Freshman Team selection Hallie Thome, who averages 14.5 points per contest.
? Sophomore Jillian Dunston and Thome lead the team in rebounds, averaging 6.1 and 5.1 boards per game, respectively.
? As a team, Michigan averages 78.4 points and 36.8 rebounds per game.

WHAT’S IN A WIN?
? With a win, the Hawkeyes will advance to face top-seeded Maryland on Friday at 11 a.m. (CT). The game will air live on the Big Ten Network.
? With a win, Iowa will have won its opening game of the tournament in each of the last four seasons and 14 times overall in program history.

B1G TOURNAMENT HISTORY
? Iowa is 21-19 in the Big Ten Tournament since its inception in 1994-95.
? The Hawkeyes have claimed two tournament titles (1997, 2001) and made four championship game appearances.
? In 2014-15, the Hawkeyes, the No. 2 seed, opened tournament action with their third win of the season against Nebraska, 74-65, but were eliminated in the semifinal round by Ohio State, 91-85, in overtime.

AWARDS SEASON
? Three Hawkeyes were honored with Big Ten Conference awards Monday afternoon.
? Junior Ally Disterhoft garnered second team All-Big Ten accolades by coaches and media for the second consecutive season and received Iowa’s Sportsmanship Award. The preseason All-Big Ten pick by the media has scored in double figures in every game this season and in 75 of her 81 consecutive starts.
? Disterhoft, who was named to the Big Ten Player of the Week Honor Roll twice in the regular season, leads the Hawkeyes in scoring, averaging 16.9 points per game.
? Freshmen Tania Davis and Megan Gustafson were named to the Big Ten All-Freshman Team. It is the fifth time in 15 years that a conference team has had two players named to the Big Ten All-Freshman Team and the first time since 2008 when Ohio State accomplished the feat (Kalisha Keane, Brittney Thomas).
? Davis is one of two Big Ten freshmen to lead her team in assists per game (3.3) and average at least one steal per game (1.0) this season. She has dished out 98 assists through 30 games played, the third-highest total recorded by a freshman at Iowa. Samantha Logic holds the record for assists in a freshman season at Iowa with 136, followed by Jaime Printy who dished out 99 in her debut season.
? The point guard has paced the Hawkeyes in assists in nine games, dishing out five or more in eight contests. Davis posted a career-high seven assists at Purdue on Jan. 24.
? Gustafson is the only freshman and one of three players in the conference overall to lead her team in field goal percentage (.537), rebounds (198), and blocks (52) this season. She recorded seven double-doubles in the last 10 games and earned Iowa’s first Big Ten Freshman of the Week since 2012 on Feb. 22.
? The center has blocked 52 shots, the third-highest total recorded by a freshman in Iowa history. Morgan Johnson holds the record for blocks in a freshman season with 79, followed by Tangela Smith who tallied 73. Gustafson has posted three or more stuffs in nine games, including a career-high five at Virginia on Dec. 2. She has led Iowa in rebounding in 14 games, including nine of the last 11 this season.

SENIOR SALUTE
? The Hawkeyes sent seniors Kali Peschel, Nicole Smith, and Claire Till out of Carver-Hawkeye Arena with a 61-56 victory over Illinois on Feb. 27.
? Iowa outrebounded Illinois, 44-31, and shot 42.1 percent from the floor to record the win.
? Freshman Megan Gustafson led Iowa with 16 points and 10 rebounds for her seventh career double-double. She sunk 8-of-11 field goal attempts and posted a pair of blocks.
? Joining her in double figures were sophomore Whitney Jennings (14), junior Ally Disterhoft (13), and sophomore Chase Coley (10). Coley added four blocks to her line to match her career-high.

BIG DIFFERENCE
? Since altering the lineup to include freshman Megan Gustafson and sophomore Chase Coley, the Hawkeyes have seen an increase in production offensively.
? In the last 11 games, Iowa has had five players average double figures in scoring rather than three in the previous 19 games. Leading the pack is junior Ally Disterhoft (17.9), followed by Coley (12.6), Gustafson (12.5), sophomore Whitney Jennings (10.6), and freshman Tania Davis (10.4).
? Gustafson has seen her rebounds per game average spike from 4.8 to 9.7 in the last 10 games, while Coley has made the jump from 5.0 to 7.2.
? The 6-3 duo accounts for 47 percent of the team’s rebounding effort and 34 percent of Iowa’s offensive production.

DOUBLE-DOUBLE MACHINE
? In the last 10 games, freshman Megan Gustafson has posted seven double-doubles, the first of her career.
? The stretch began with three consecutive double-doubles against Michigan (12 rebounds, 10 points) on Jan. 28, at Northwestern (15 points, 13 rebounds) on Jan. 31, and at Indiana (12 points, 10 rebounds).
? After recording eight rebounds and seven points against Michigan State on Feb. 7, Gustafson returned to her double-double ways with 13 points and 11 rebounds against Ohio State on Feb. 11.
? The Port Wing, Wisconsin, native secured her fifth double-double at Minnesota on Feb. 15, tallying 14 points and a career-high 19 boards. The last player to record more than 17 rebounds in a game was Samantha Logic (vs. Drake on Dec. 21, 2013). The Iowa record for rebounds in a game is 26 (Jerica Watson vs. Creighton on Dec. 15, 2001).
? After a two-game break, Gustafson returned to her double-double ways with 15 points and a team-high 11 rebounds at Penn State on Feb. 24.
? Gustafson ended the regular season with her seventh double-double, tallying a team-high 16 points and 10 rebounds against Illinois on Feb. 27.

HAWKEYE FRESHMEN REPORT
? Freshman Megan Gustafson leads all Big Ten freshmen in blocks with 52, followed by Illinois’ Alex Wittinger who has recorded 47 on the season. Gustafson is one of two freshmen to lead her team in blocks this year (Hallie Thome, Michigan — 34 blocks).
? Gustafson leads league freshmen in blocks per game (1.7), is second in rebounding (198), and fourth in scoring (298). She is one of two freshmen in the conference who lead their team in rebounds (Jessica Shepard, Nebraska — 254 rebounds).
? Gustafson has blocked three or more shots in nine of her 30 career games.
? Freshman Tania Davis is one of two Big Ten freshmen who lead their team in the assists category. She has distributed 98 this season, bested only by Penn State’s Teniya Page (118).
? Davis is second among Big Ten freshmen in steals (30) behind Page (36) and sixth in scoring (242). She has dished out five or more assists in eight of her 30 games played.

CALL ON ME
? Junior Ally Disterhoft, a second team All-Big Ten selection by league coaches and media, has been a consistent force for the Hawkeyes all season.
? Disterhoft, who averages 36.4 minutes per contest, is fifth in the conference and ninth nationally with 1,089 minutes played this season.
? The 6-0 forward paces Iowa in points per game (16.9), and is third in rebounds per game (5.5), assists per game (2.6), and steals per game (0.9).
? She has scored double figures in every game of the season and in 75 of her 81 career starts.
? The Iowa City, Iowa, native has led Iowa in scoring in 14 of 30 games this season, scoring 20 points or more in nine contests.
? Disterhoft owns a .530 field goal percentage, a .359 three-point field goal percentage, and a .717 free throw percentage.

MOVING UP THE CHARTS
? Junior Ally Disterhoft is 11th all-time in scoring (1,485 career points), 14th all-time in three-point field goals made (106), and 18th all-time in rebounding (594 career rebounds) in Iowa women’s basketball history.
? Disterhoft, who has played in every game of her Hawkeye career with 81 consecutive starts, has scored double figures in every game this year and in 75 of her 81 career starts. She is the eighth-highest scoring junior in program history with 508 points this season. The record for points in a junior season is 564 (Michelle Edwards, 1986-87).
? Megan Gustafson has compiled 52 blocks through 30 games played this season, which is third on the all-time freshman list at Iowa. The program record of 79 stuffs was set by Morgan Johnson in 2009-10. Gustafson averages a team-leading 1.7 blocks per contest and has compiled three or more stuffs in nine games this season.
? Gustafson owns the sixth-highest rebound total of all freshmen in program history with 198 boards. The record for most rebounds in a freshman season is 252 (Krista VandeVenter, 2004-05).
? Alexa Kastanek has netted 55 three-point field goals so far in her junior campaign, which ties for fourth in her class in program history. The record for three-pointers made in a junior season is 97 (Melissa Dixon, 2013-14).
? Tania Davis is the third-highest rated freshman passer in program history with 98 assists. The record for assists in a freshman season is 136 (Samantha Logic, 2011-12).

DISTERHOFT EARNS ACADEMIC ALL-DISTRICT ACCOLADES
? Junior Ally Disterhoft earned Capital One Academic All-District first team recognition for the second consecutive season for her efforts on the court and in the classroom on Feb. 11.
? She advances to the Capital One Academic All-America Team ballot, where first, second, and third team All-America honorees will be elected in early March.
? Disterhoft, the lone sophomore in the country to earn Capital One Academic All-America third team accolades in 2015, is a business major studying accounting and finance.
? The Iowa City, Iowa, native is a four-time Dean’s List honoree, academic All-Big Ten selection, Big Ten Distinguished Scholar, and two-time Presidential Committee on Athletics Scholar Athlete.
? She was also recognized as Iowa’s female Student-Athlete of the Month in November — an award voted on by UI student-athletes.

UP NEXT
With a win against Michigan, Iowa can advance to play top-seeded Maryland on Friday at 11 a.m. (CT) at Bankers Life Fieldhouse. The Big Ten Tournament quarterfinal game will air on the Big Ten Network.