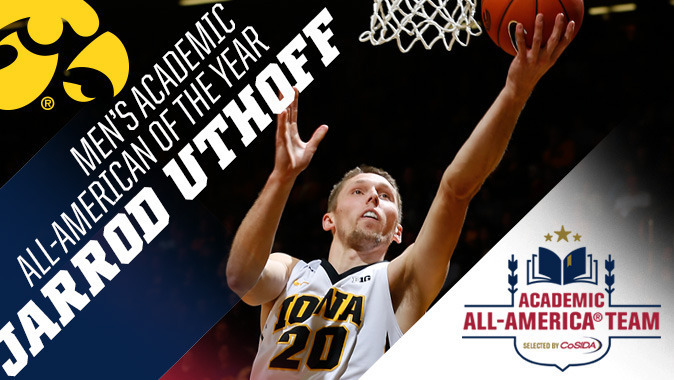 IOWA CITY, Iowa —University of Iowa men’s basketball student-athlete Jarrod Uthoff has been named the 2015-16 Academic All-America of the Year for Division I Men’s Basketball, while Mike Gesell was voted to the Academic All-America second team. The announcement was made Wednesday by the College Sports Information Directors of America (CoSIDA).

Uthoff, a native of Cedar Rapids, Iowa, has an economics degree and is pursuing a Master’s in leisure studies. He has a 3.42 G.P.A., including a 4.0 G.P.A. during the fall semester. He was named an NABC/ESPN Midseason second team All-America, and is a finalist for the Oscar Robertson Trophy. Uthoff is also on watch lists for the John Wooden Award and the Lute Olson Award. He was the Big Ten Co-Player of the Week on Dec. 14 and the CBS Sports Player of the Week on Jan. 4.

Uthoff has led the Hawkeyes to a 20-9 record and a No. 16 national ranking. He leads the Big Ten in blocked shots (2.7 blocks per game), and is second in scoring (18.4 points per game) and 12th in rebounding (6.4 rebounds per game). Uthoff is one of two players in the last 20 years to average at least two made three-pointers per game and two blocks per game. In less than three years he has accumulated 1,209 points, 126 three-pointers, 557 rebounds and 169 blocks.

Gesell, a native of South Sioux City, Nebraska, earned a finance degree in three years and is pursuing a Master’s in leisure studies. He has a 3.94 G.P.A., including a 4.11 G.P.A. during the fall semester. The point guard, who was a third team Academic All-American a year ago, becomes the third Hawkeye men’s basketball player to earn multiple Academic All-America laurels (Luke Recker in 2001 and 2002; Adam Haluska in 2005, 2006, and 2007).

The UI is one of three schools (Belmont and North Dakota State) to have multiple honorees on the first, second, or third Academic All-America teams.

Iowa concludes its regular season on Saturday at Michigan. Tipoff is set for 7:06 p.m. (CT) at the Crisler Center. The game will be televised nationally on BTN (BTN2GO).